The sky was falling. And Richard “Dick” Mack gathered a group of graduate students to help collect it. In the first few days after Mount St. Helens erupted—sending some 540 million tons of ash over an area of 22,000 square miles—the WSU ecology professor was already thinking of its potential research value.

Mack‚ now a professor emeritus in WSU’s School of Biological Sciences, spent the summer of 1980 doing field work between Pullman and Vantage, studying the effects of the ash on vegetation—particularly native plants, such as certain willows and grasses. For about five years or so after that, he and … END_OF_DOCUMENT_TOKEN_TO_BE_REPLACED

The errant asteroid hurtled through space at 40,000 miles per hour. Tumbling in a wild orbit, it glinted with sunlight as it neared the Earth. At 65-feet wide, the potato-shaped object should have been easily detected but no one saw it coming.

On the morning of February 15, 2013 the asteroid exploded with the force of 500 kilotons of TNT about 15 miles above the city of Chelyabinsk in the Russian Ural Mountains. The fireball was reportedly 30 times brighter than the sun. The shockwave blew out windows in hundreds of buildings and injured more than 1,500 people.

It was Earth’s most powerful meteor strike … END_OF_DOCUMENT_TOKEN_TO_BE_REPLACED

Like the eruption of Mount St. Helens on May 18, 1980, the personal stories of campers, loggers, airline pilots, Forest Service workers, and geologists came pouring out before, during, and after the cataclysm. One of those geologists, Richard Waitt, gathered anecdotes and recollections of the volcanic eruption over the course of three decades, now compiled in this tome.

See the details of a hand-drawn map found in WSU's Owen Science Library.

The Palouse, in its way, is a perfect place. A land of soft, rolling hills framed by rivers, mountains, forests, and desert, this agricultural hinterland feels all four seasons fully, and in all likelihood grows enough food to feed its inhabitants and visitors with ease. It’s home to scholars and farmers, and its story begins in the ice ages and continues today with an unrelenting flow of research from two major universities.

Despite such beauty and bounty, the Palouse has not received the artistic consideration that has Yosemite or Hudson Valley. I’ve never seen anything like that, at least until a day last winter when … END_OF_DOCUMENT_TOKEN_TO_BE_REPLACED

Exploring eastern Washington state's abundant rock history on the side of the road.

As disaster-obsessed scientists go, geologists must be near the top of the list. They deal with time scales spanning billions of years, so a set of catastrophes occurring 10 million years ago is like yesterday. Something in the last century comes close to being, well, now.

And they see catastrophe all over the place.

Take the roadcut near the Old Moscow Road. It’s a modest pile of crumbling rock, but John Wolff and Rick Conrey can see in its surrounding rock a thick blanket of hot lava inundating southeast Washington.

“It covers an area that goes from here to Spokane to The Dalles, buried at … END_OF_DOCUMENT_TOKEN_TO_BE_REPLACED

In August 1969, Hurricane Camille slammed into Mississippi with winds of nearly 200 miles an hour. The storm blew many things far and wide, including the career track of coastal geologist Orrin Pilkey ’57. Up to that point, Pilkey had worked quietly studying deep-sea sediments, becoming an expert on abyssal plains (the flat underwater surfaces found along the edges of continents). But when he visited his parents on the Mississippi Gulf Coast, Pilkey found he was a lot more interested in what was happening to coastlines than on ocean floors far from shore. Pilkey and his father co-wrote a book, How to Live With an … END_OF_DOCUMENT_TOKEN_TO_BE_REPLACED 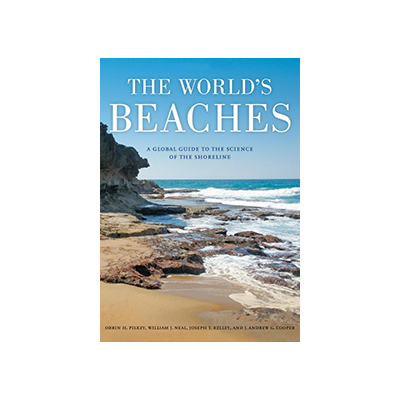 It may appear to be a scholarly approach to beaches, but once you wade in to this book, you will find an entertaining and informative read. With a light touch, Pilkey and his co-authors manage to describe some heavy concepts like erosion, tsunamis, and human impact. Their goal, they say in the introduction, is to provide “a global perspective in regard to beaches, how they form, how … END_OF_DOCUMENT_TOKEN_TO_BE_REPLACED