Skip to main content Skip to navigation
Spring 2020
Book review of Bread Lab! by Kim Binczewski and Bethany Econopouly » More ...
Spring 2019
As children have more access to smartphones and other devices, it's imperative that we expose them to more time in the natural world. The movement known as biophilia and policies like Washington state's No Child Left Inside can increase the opportunities to see and play in nature. » More ...
Summer 2017

What do the ABC’s have in common with a treble clef? How about a children’s theater production and creative problem-solving? These questions are not riddles, says Becky Cain-Kellogg ’91, owner of the Puyallup Children’s Theater and Music Academy.

Cain-Kellogg opened the theater in Puyallup seven years ago, although she has taught music and theater for nearly 30 years. During that time, Cain-Kellogg also worked as an arts integration specialist, combining music and the arts with subjects such as math and history in schools.

WSU students and future teachers write, illustrate, and produce their own children's books to compete for the Inga Kromann Award.

As spring surrenders to summer, so must we yield our state to its youngest residents, approximately 1.15 million children and teens who will soon take over our communities, yards, pools, beaches, and parks. 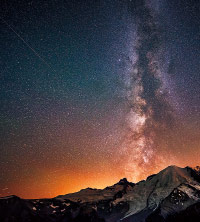 One of my early memories is of exploring a campsite on Mount Rainier. I remember roaming around the spot on a cool June morning, exploring a paved road dusted with pine needles and peering into the wet shadows of the woods. Laced into my first hiking boots, I followed my parents along the Sunrise Nature trail, an easy 1.5 mile loop … END_OF_DOCUMENT_TOKEN_TO_BE_REPLACED

Jane Kelley pulls a picture book from a shelf in her office and, flipping through the pages, shows a story of a little girl living in a graffiti- and trash-covered apartment complex. The book, Something Beautiful, tells how the girl takes charge of her own environment and cleans up her home to make it more beautiful.

Such depictions of poverty in realistic children’s fiction are unfortunately rare, says Kelley, an associate professor in the College of Education and a scholar of children’s literature. Despite the historically high prevalence of poverty in the United States, that fact of life for many kids is underrepresented in the … END_OF_DOCUMENT_TOKEN_TO_BE_REPLACED

Play and depression may be opposite sides of a coin, says Dr. Jaak Panksepp, a neuroscientist and the Baily Endowed Chair of Animal Well-Being at Washington State University

Fresh out of college in 1971, with a little money saved up, Barry Hewlett bought a one-way ticket to Europe. He trekked around Europe for a while, but eventually started to get bored. He noticed many of his fellow youthful travelers were heading for India. So he headed south, for Africa.

He found a cargo boat that was going to Alexandria, Egypt, and booked passage. And kept going, up the Nile to Khartoum in Sudan. Along the way, he says, other travelers told him, you’ve got to see the pygmy people. So he made his way to Uganda to visit pygmies.