Meet more of Washington state’s small farmers here — from the godmother of the modern small farms movement to the owner and operator of a 100-percent grass-fed dairy and more. 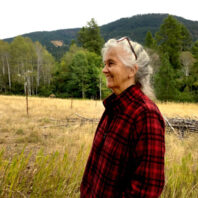 Lora Lea Misterly was a 4-H kid. Growing up on a small farm near Leavenworth, she raised dairy calves and livestock … END_OF_DOCUMENT_TOKEN_TO_BE_REPLACED

Winter 2019
Farmers and cowboys fight food insecurity at the Pendleton Roundup in Oregon by gathering food and donations to help food banks in Portland and other areas around the state. » More ...
Summer 2019
Histories of migration and struggle come alive in "Hardship to Homeland: Pacific Northwest Volga Germans" by Richard D. Scheuerman and Clifford E. Trafzer. » More ...
Fall 2015
A book by WSU Press tackles issues confronting both the agriculture industry and environmental activists. » More ...
Fall 2013

Uncle Sam took the challenge in the year of ’33

For the farmers and the workers and for all humanity

Now river, you can ramble where the sun sets in the sea

But while you’re rambling, river, you can do some work for me

In the early 1950s, Washington State College and the Bureau of Reclamation published a Farmer’s Handbook for the Columbia Basin Project. Written for new farmers breaking ground in the newly irrigated Columbia Basin Project, the handbook offered advice on everything from what crops to grow to what kind … END_OF_DOCUMENT_TOKEN_TO_BE_REPLACED

During cherry harvest in 1981, Orland died, and … END_OF_DOCUMENT_TOKEN_TO_BE_REPLACED

Penn Cove may be known for its mussels, but just across the Whidbey Island bay from Coupeville is another operation—the Muzzall family farm, known to local grass-fed beef fans as the Three Sisters Cattle Company.

The farm was founded in 1910 by Ron Muzzall’s great-grandparents. For generations it was a dairy. When Ron ’86 returned from college, the farm had 50 cows. With his wife, Shelly, who grew up with family farming in Eastern Washington, he planned to follow in his parents’ footsteps.

But the dairy business was changing so fast. To keep up, the Muzzalls had to continuously add to their herd—something … END_OF_DOCUMENT_TOKEN_TO_BE_REPLACED

There was a time, not so long ago, in our great Northwest when boundaries were not a great concern. When the first non-Indian settlers reached the Palouse and the Columbia Plateau, they could look to the distant horizon and see nothing but blue sky and virgin prairie and shrub-steppe, potential farmland as far as they could imagine. And as they learned to know the land, they reveled in what the college scientists told them, of seemingly endless topsoil, of windblown loess 200 feet deep. But even as that soil washed and blew away at an unsettling rate, they also learned to ignore the worries of … END_OF_DOCUMENT_TOKEN_TO_BE_REPLACED

Mix all ingredients, stuff peppers, top each pepper with tomato sauce. Bake at 350 degrees for one hour. Top with cheese last five minutes.

P.S. Please be mindful we are country cooks and don’t measure a thing. These are approximate amounts. Just play around with it!