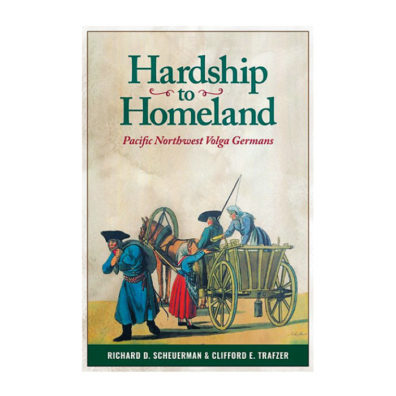 When the Prussian Princess Sophie of Anhalt-Zerbst deposed (and possibly murdered) her husband, the Russian Emperor Peter III, she became Empress Catherine the Great. Catherine ruled from 1762 to 1796. She ushered in a golden age for the empire. She had herself inoculated against smallpox and her advocacy and example saved millions of lives. She expanded the Russian empire into Poland in the west, and into Alaska in the east. And to shore up her western border, she invited German peasants to settle along the Volga River.

By paying their way and allowing the settlers to retain their languages and cultures, she enabled 27,000 migrants to settle. For 100 years, the Volga Germans prospered and made good use of die Kaisarina Katarina’s gift of land. Dick Scheuerman grew up in eastern Washington listening to his elder tell the tales of the “historic trek” from Germany to Russia—and the great betrayal that forced the descendants of those settlers to embark on another great trek.

By 1871, the Russian Senate had reneged on the deal that brought the settlers to the banks of the Volga. Faced with poverty, and being drafted into the Russian army, some 100,000 Volga Germans immigrated to North America.

As Scheuerman points out, place names throughout the Pacific Northwest reveal their Russian origins. Moscow, Idaho, and Odessa, Washington, “and smaller rural hamlets like Tiflis and Batum” are part of the story of a great Russian-German immigration to the United States in the late nineteenth century.

In 1881, the first wave of Volga Germans traveled from Kansas to San Francisco by rail, and then on to Portland by steamship. The following year, some families crossed the Cascades “by wagon…to establish homes in eastern Washington Territory’s fertile Palouse Country.”

Some immigrants came to Ritzville, an area around the Big Bend of the Columbia River. The land there had been thought to be uncultivable, but Phillip Ritz, a few others, and the new immigrants proved that wrong. “The loam was dark and rich in the area, but without lumber they had to live in sod houses or dugouts and use sagebrush and cow dung for fuel. Through efficient methods of tillage and fallowing, the industrious farmers achieved remarkable success.” Soon, the new farmers were “a distinctive island in the semi-arid pioneer landscapes of Adams County.”

The immigrants brought seed with them, hardy wheat varieties like Saxonia and Turkey Red. They brought names, too, like Weyerhaeuser and others that still figure prominently in Northwest culture and economics. And they brought stories, which Scheuerman and his wife, Lois, have been collecting since the 1970s.

The stories the kolonisty brought with them, and that the Scheuermans preserve here, tell of ties to the great czarina, a gift of a blue teapot that saved lives, and a moving story about a family, pushed by discrimination out of their Volga River home, who relocate to the American West. Respectful of the Native American families living nearby, they made a new home in the hills of the Palouse.

Hardship to Homeland is a fascinating read. First published in 1980, and revised and expanded for this new 2018 edition, the book is not only a detailed history of one of the largest ethnic migrations in the history of the United States, it is also a valuable resource for folklorists, as the authors painstakingly collected numerous stories handed down within Volga German families. It is also a testament to the value immigrants bring in terms of new political, religious, and social ideas, as well as economically important innovations now ingrained in Pacific Northwest farming and forestry methods.