Skip to main content Skip to navigation
Spring 2019
The Spring 2019 issue's note from the editor explores themes of the world inside the soil and our bodies, and outside in nature as far as the Arctic. » More ...
Spring 2019

While Washington State University has long been known for wheat breeding and other significant crop and plant research, the University’s scientists have also made significant strides in understanding the importance of soil and soil health.

Here are just a few articles on findings and research at WSU on soil health; you can find more at WSU News and on the Crop and Soil Sciences website. You can also read more about influential soil scientist Jim Cook in “Soil Man” (in this issue).

Scientists at the WSU Cook … END_OF_DOCUMENT_TOKEN_TO_BE_REPLACED

In the embers of an ancient winter day, a Swedish scout scrambles up the hill of snow-covered boulders, hurrying over the slippery ground between them along a narrow path. His panting breath trails after him until he stumbles through the castle gate gasping, “Vandals on the riverbank! Bandits to the east!”

The heavy palisade slams shut behind him as men rush to position along a glinting rock wall. From 150 feet above the valley floor, they watch as silhouettes begin scaling the boulders below. With a signal, arrows and stones rain down upon them, yet the marauders advance, dragging their weapons or clenching them in … END_OF_DOCUMENT_TOKEN_TO_BE_REPLACED

Ammonia based fertilizer, which provides nitrogen, can offer a great boost to even an otherwise not so healthy soil. But ammonia fertilizer, which depends on petroleum for its manufacture, is becoming very expensive. The consistent high yields of wheat on the Palouse depend on applying about 100 pounds of fertilizer per acre, with that fertilizer currently costing $50-80/ton. More significant, however, is not the cost, but the long-term effect of applying so much fertilizer.

Soils on the Palouse before farming were generally neutral, with a pH of 7, says Rich Koenig. Since then, the pH of the soil has dropped in some cases as much … END_OF_DOCUMENT_TOKEN_TO_BE_REPLACED

The USDA Natural Resources Conservation Service has an interactive soil map that can help determine the soils for an area of 100,000 acres or less. Zoom into to your desired location and select the area to see what soils cover that land. 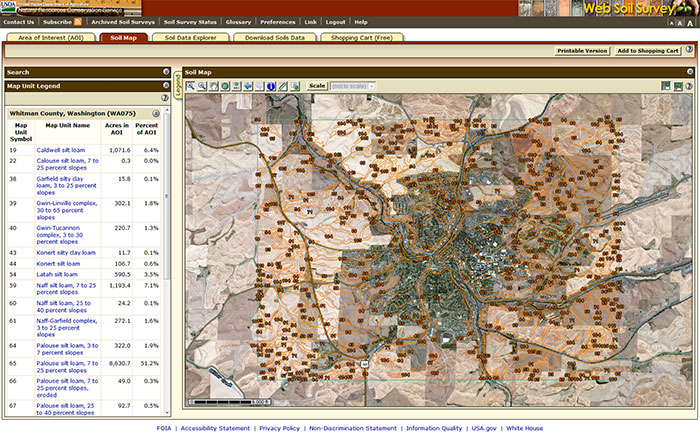 Read more about Washington’s soils in “A Fine Thin Skin.”

How you contribute to soil health

If you contribute your daily bodily wastes to a municipal waste treatment plant, you are more than likely directly benefiting Washington soils.

According to Puyallup soil scientist Craig Cogger, each person in Washington produces about 60 pounds of biosolids per year. “Biosolid” is a euphemism for human waste and other inputs once they have been treated at a wastewater treatment plant. For the past 15 years, Cogger has helped spread biosolids on wheat land in Douglas County and studied the effect.

That effect has surprised him.

“We have seen a remarkable increase in organic matter,” he says, “despite the fact that the amount of biosolids … END_OF_DOCUMENT_TOKEN_TO_BE_REPLACED

There was a time, not so long ago, in our great Northwest when boundaries were not a great concern. When the first non-Indian settlers reached the Palouse and the Columbia Plateau, they could look to the distant horizon and see nothing but blue sky and virgin prairie and shrub-steppe, potential farmland as far as they could imagine. And as they learned to know the land, they reveled in what the college scientists told them, of seemingly endless topsoil, of windblown loess 200 feet deep. But even as that soil washed and blew away at an unsettling rate, they also learned to ignore the worries of … END_OF_DOCUMENT_TOKEN_TO_BE_REPLACED

Fall 2011
Different as they seem, the soils of Eastern and Western Washington have one thing in common. They come—either by water, wind, or ice—generally from elsewhere. And what takes eons to form can be covered over or erode away in a geologic heartbeat. » More ...
Winter 2002

Some climate change researchers have placed high hopes in forest and grassland soils and their ability to act as carbon “sinks.” These sinks store excess atmospheric carbon and thus partially offset the effect of increasing amounts of carbon dioxide in the atmosphere. Unfortunately, a recent study by Washington State University environmental scientist Richard Gill and his colleagues indicate the sink may be reaching capacity.

Although carbon dioxide has been increasing in the atmosphere for the last 10,000 years, the increase has been especially rapid in the last 150 years because of the industrial revolution and the conversion of land to agricultural uses. The rate of … END_OF_DOCUMENT_TOKEN_TO_BE_REPLACED