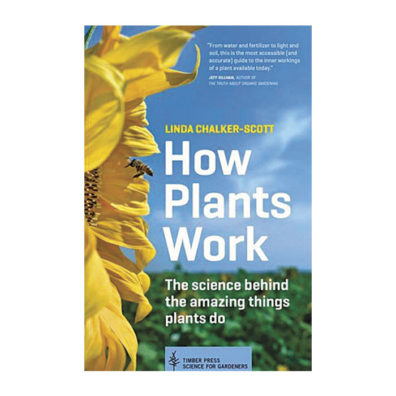 Anyone interested in how plants do what they do will enjoy How Plants Work. Washington State University associate professor of horticulture Linda Chalker-Scott has brought the essentials of plant science together and made them entertaining for gardeners and the otherwise curious.

Chalker-Scott digs into the science of plants while keeping the narrative rooted in successfully growing a garden. Along the way, she evaluates a variety … END_OF_DOCUMENT_TOKEN_TO_BE_REPLACED

If it’s going to be used in an organic production system, reasoned Miles, now a vegetable horticulturist at the WSU Mount Vernon … END_OF_DOCUMENT_TOKEN_TO_BE_REPLACED

Diane Szukovathy from Jello Mold Farm in Washington state’s Skagit Valley puts together a bouquet of locally-grown flowers and offers tips to gardeners on building their own bouquet of blooms. Diane and her husband Dennis Westphall grow cut flowers. They have teamed up with Washington State University researchers Bev Gerdeman and Lynell Tanigoshi to build a community of local, seasonal flower growers in the Pacific Northwest. The growers sell at markets, directly to farmers, florists, grocery stores, and local businesses. Read more in “Business is Blooming.”

Brian Carter ’06 is a natural resource specialist with the U.S. Army Corps of Engineers, but he often uses a shorter description.

“I’m a curator,” he says, while offering up the Latin name for a tree at Seattle’s Ballard Locks. “I make sure your grandchildren will see the same garden you do, just in a different life span.”

Carter is talking about the life span of trees and shrubs in the Carl S. English Jr. Botanical Garden next to the locks that link lakes Union and Washington to Puget Sound. But he could also be referring to the life span … END_OF_DOCUMENT_TOKEN_TO_BE_REPLACED

Though it is the most widespread of plant ecosystems in eastern Washington, covering 24,000 square miles, the sagebrush-steppe is probably the least understood, and therefore the least appreciated, especially among gardeners. By nature, gardeners like to make things grow, and by the looks of things, not much grows in that desert-like region, except sagebrush. But the sagebrush-steppe region is home to some of most adaptive and intriguing plants on earth, and gardeners can learn much here to apply to eco-friendly rock gardens and xeriscapes.

The region is most strongly defined by its dryness. Lying entirely east of the Cascade Mountains, it receives only eight to12 … END_OF_DOCUMENT_TOKEN_TO_BE_REPLACED

How dry it is! Understanding the summer climate west of the Cascades baffles lots of residents. The “emerald green” attitude extends to believing that summer months wrap themselves in rain and mist just as winter does. However, our “modified Mediterranean” climate makes water planning as important in Seattle as it is in Spokane.

Summer of 2002 brought only 4.6 inches of rain at Sea-Tac (May 1 through November 1). September and October, usually good planting months, totaled only 1.08 inches combined. Another way to get perspective on this summer rainfall total-just imagine you’ve planted hybrid rhododendrons in April. They require about an inch per week, … END_OF_DOCUMENT_TOKEN_TO_BE_REPLACED

Some gardeners work to change conditions in their yard to create havens of greenery and blooms with plants that wouldn’t grow there otherwise. They amend the soil to suit plants’ needs, they water a lot during the summer, and they give added protection to non-hardy plants.

More and more gardeners today are saying “No!” to extra tasks, choosing to work with nature instead of against it. They are using nature as a model in creating yards and gardens that reflect the natural beauty of the place where they live. They’re determining the aspects their yards share with surrounding natural areas-sun, shade, rocks, slopes-and they’re choosing … END_OF_DOCUMENT_TOKEN_TO_BE_REPLACED