On my second time through the very enjoyable edition I looked more closely at the central picture on page 45 which identified the view at “Columbia River, Facing Saddle Mountains.” This picture does not show the Saddle Mountains, which are north of the Columbia, but in fact looks west toward the sun setting over Umptanum west of Vernita Bridge where Hwy 24 crosses the Columbia. Just off the gravel bar in the center of the picture is a bluish-green spot which is part of the BPA’s Midway substation, which is tucked between the river and the ridge and handles power lines into … END_OF_DOCUMENT_TOKEN_TO_BE_REPLACED

Most of you really like us. Some of you don’t. A very few of you (2 percent) ignore us, but hardly anyone outright hates us. That’s the gist of the reader survey many of you recently participated in. Either way, we’re listening. And the most striking point of the survey was that you do indeed read us.

We haven’t done a reader survey in quite a while, not because we’re not interested, but because they’re expensive. There comes a time, however, when an editor needs something a little more systematic, even more than your informal comments and letters, in gauging his readership. Fortunately, that time … END_OF_DOCUMENT_TOKEN_TO_BE_REPLACED

Moreover, we were struck by the completely unnecessary cause of this disaster in the first place. It seems that the collapse of the timber industry in the Pacific Northwest was “due in large part” to placing the protection of the spotted owl over the welfare and economic well being of the entire human population of not only Golden Valley, but also other communities in the logging … END_OF_DOCUMENT_TOKEN_TO_BE_REPLACED

Professor Cornell Clayton’s article in the winter issue, “Understanding the Civility Crisis” is thought-provoking. However, he betrays the liberal bias common to the majority of today’s college professors. All of the examples he mentions depicting “incivility” in political discourse are attributed to conservative commentators or politicians, as if the right had a monopoly on it.

Hardly. He fails to mention, for example, the current king of media incivility, MSNBC’s character assassin Keith Olbermann, who regularly violently trashes anything conservative and has in the past called President Bush a liar and told him to shut up. The current climate of political discourse was … END_OF_DOCUMENT_TOKEN_TO_BE_REPLACED

Architect Rex Hohlbein ’81 sits with clients Jim and Ann in an open sliding window of their home in Clyde Hill, Washington. The Hinoki House, a new view home in Bellevue’s 1950s Clyde Hill neighborhood, is exemplary of what has become known as “Northwest style.”

A hallmark of the house is walls made out of windows which lets in light and views of the trees, pond, and courtyard. In the living room, where the windows slide away, it opens into a stunning view of Lake Washington. There is a comfortable feeling of elegance and peacefulness within, along with … END_OF_DOCUMENT_TOKEN_TO_BE_REPLACED 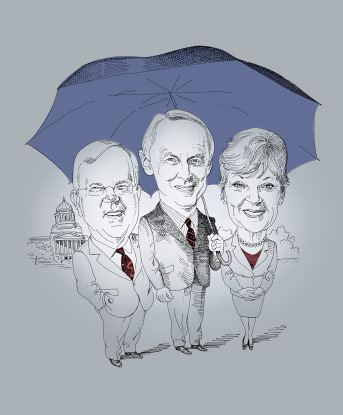 Representative Hunt represents the 22nd District which includes Olympia and surrounding areas. He is chair of the State Government and Tribal Affairs Committee, serves on the Education Committee and the Ways and … END_OF_DOCUMENT_TOKEN_TO_BE_REPLACED

The cover illustration for Washington State Magazine’s Fall 2010 issue—Cultivated Landscapes—pays homage to Grant Wood’s famous Stone City, Iowa painting of 1930. It was Wood’s first major landscape and is now on permanent display at Omaha’s Joslyn Art Museum. Wood is most closely associated with the American movement of Regionalism and advanced figurative painting of rural American themes in an aggressive rejection of European abstraction.

Stone City, Iowa was painted the same year as his seminal American Gothic. Wood by now had abandoned his earlier Impressionist-inspired … END_OF_DOCUMENT_TOKEN_TO_BE_REPLACED