On my second time through the very enjoyable edition I looked more closely at the central picture on page 45 which identified the view at “Columbia River, Facing Saddle Mountains.” This picture does not show the Saddle Mountains, which are north of the Columbia, but in fact looks west toward the sun setting over Umptanum west of Vernita Bridge where Hwy 24 crosses the Columbia. Just off the gravel bar in the center of the picture is a bluish-green spot which is part of the BPA’s Midway substation, which is tucked between the river and the ridge and handles power lines into and out of central Hanford. At one point in the sub-station’s history it was the principal electrical power source for central Hanford and the reactors, which lie to the east of where this photo was taken.

Your Summer 2012 issue was a flashback and a flash-forward in consecutive articles. “The Collectors,” a well-told story of the Regla Papers, transported me to the early 1980s—as a young grad student in history, I worked on that collection in the archives under the guidance of John Kicza and John Guido. Then “The Atomic Landscape” presented the impressive body of work on that topic generated by WSU grads. It would be impossible for you (as the article’s author) to know that nearly 20 years after finishing my master’s, I published essays about Hanford in ISLE and Isotope, two journals of environmental literature. They are minor in comparison to the works of the authors you highlighted, but I’m still proud to feel some connection to their work and to our collective alma mater.

I found the Summer 2012 issue informative and visually appealing as always but discovered, in addition, two personal surprises. J. Horace Nunemaker is a name that has burned itself into my brain but I never knew anything about him. At the end of my junior year (1956, I think), I unexpectedly received the J. Horace Nunemaker Award “for the student with the most promise of making a contribution to the humanities.” I didn’t apply for this—it just arrived as a letter, with a check for $150, as I recall. It was fascinating to learn about him and his interests in the collectors story. As he died in 1949, the award must have been set up by his family as a memorial: I received it seven years later. I don’t know whether it is still given. The amount would seem trivial today but I think it more than covered tuition for a term (or even year) then. I would love to get in touch with his daughter Mary Emma Eriksen, as it has occurred to me over the years that I HAVE made a contribution to the humanities! I would like for her to know that.

The other story of personal interest was about Paul P. Kies. As a new freshman I needed another two credits to complete my schedule and I discovered Dr. Kies’s class in “Literature of the Opera.”

It met two mornings a week at 8 a.m. Students were seated in alphabetical order and I found myself (Ellen Franzen) next to Richard French, son of the president of WSC at the time, C. Clement French. He was a senior and seemed very grown-up to me at age seventeen. It turned out to be one of the most influential classes of my entire undergraduate career.

I still remember the literature we read on which the librettos were based, and now that I am a regular opera goer, I am reminded several times a year of what I learned in Dr. Kies’s class nearly 60 years ago! He showed us a piece of the heavy velvet curtain from the old Met and told us stories about the opera singers. He played the most well-known or significant arias on an old 78 rpm record player. I have remembered a lot of those too and the titles by which they are known (e.g., “Casta diva,” “Un bel di,” “Vissi d’arte,” “Celeste Aida”). Even to a freshman he was an eccentric little man. The light in his office on the third floor of College Hall was often on late at night. I wish I would have been more adventurous and called on him during his office hours. But I will never forget him and his unforgettable class that I chose only by accident.

I enjoyed your article on “The Murrow Boys” (page 18, Summer 2012). My father, Carl Pettibone, was a classmate and close friend of Edward. He had Ed’s picture hanging in our front room, and when Edward would travel to Pullman, he always stayed overnight at our house.

My father worked at the Student Bookstore for over 20 years. When Wilson Compton became president of WSC, he made Carl his business manager. Later, Carl Pettibone became the first vice president of business for WSC, now WSU.

Your recent edition was amazing from the moment I picked it up. It contained a host of references I could not fail to notice. Though not a graduate of WSU, I served for 11 years as pastor of the Simpson United Methodist Church in Pullman [1984-93] and taught several semesters as an instructor in the philosophy department at WSU. In addition, my wife Dorothy worked several years in Career Services as an employee in the Career Development Program and as coordinator of the On Campus Interviewing Program. The several references that caught my attention were the following:

Carl Gustafson, whose wife Charlene was my secretary at the Simpson UMC for 11 years. A marvelous woman! We recall many of her references to Carl, and now live in Port Angeles and are familiar with the Sequim Museum and Arts Center’s displays there of the discovery of mastodons in the area and Carl’s amazing find of the human element.

Don and Sylvia Bushaw and Clayton Crowe are remembered from my parish associations.

The name John Olerud jumped out at me and I began to realize the reason why the Mariners’s noted baseball player of recent years was familiar to me, and discovered that it was due to hearing about his father’s career at WSU!

I first opened the magazine from the back and realized that the poem there by Kathleen Flenniken was by the new poet laureate of Washington I had just witnessed on PBS. I then noticed the picture accompanying it and read the article on “The Atomic Landscape” that you presented with more photos from “Chain Reaction” by Zach Mazur. This account of “the Bomb that changed the world” made in Hanford really spoke to me for several reasons: a) my wife’s youngest daughter, Lynda, had to have her thyroid removed due to cancer at the age of nine. The family lived in The Dalles and used to swim in the Columbia downstream from Hanford, where I was told, many people called thyroid cancer “The Hanford Disease”; b) one of the first books I read years ago as a young man was John Hersey’s Hiroshima; c) my concern about this whole impact of the atomic age led me to write a poem about the reservation at Hanford after stopping by one of the gates as Zach Mazur had done. As part of the contribution to the ongoing reflection upon what happened there I include “Hanford Reservations” for your further consideration of this awesome event in our history. Thank you again for your amazing magazine!

Enjoyed the article about raspberries. It was particularly interesting to find out that nearly 60 percent of the nation’s production comes from around the Lynden area, where I grew up. In the late 50s and early 60s, picking raspberries, along with strawberries, beans, and cucumbers, is how many of us made spending money. Obviously child labor laws and technology changed that. My only problem was I broke out in hives if I ate any.

On that bicycling article—there’s the pic of that “thing” next to the Holland Library, looks like a spaceship trying to imitate I.M. Pei’s Louvre entrance. What is it? What’s its purpose? Other than to beautify the campus?

Maybe y’all can do a future piece on such additions to the campus, since us old-timers left so long ago.

We think Mara’s idea is excellent. Being here all the time, we tend to forget that many of you have not actually been on campus for a while. So we’re starting a feature called “What’s New?” which will do exactly what Mara suggests.—Editor

The Holland Library “spaceship” thing, as referred to by the reader above, is actually the 1994 Terrell Library skylight dome which brings light into the atrium, illuminating many university functions. Photos by Robert Hubner and Shelly Hanks, respectively below. 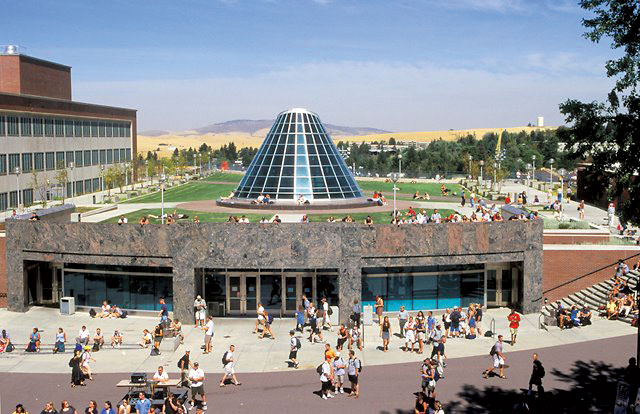 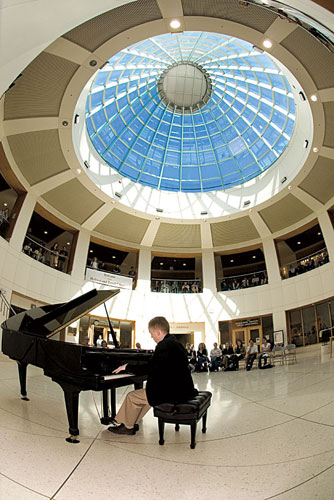 Ancient DNA—bringing the past to life: WSU molecular anthropologist Brian Kemp shows how he gathers and analyzes centuries-old genetic information. See the video at wsm.wsu.edu/extra/ancient-dna

“We just found an eruption 300 times the size of Mount St. Helens” http://bit.ly/JnE5GR

Cute alert: Pygmy bunnies. And they’re bouncing back among the WA sagebrush. http://bit.ly/JSaRFo

Why can’t we all just get along? A #WSU student’s study of annoying customers offers a few clues. http://bit.ly/Lg6Xmj via @boingboing