In the September 10, 1951, issue of Life magazine is a picture of a bulldozer mounding apples in the Yakima dump. Seven acres of apples worth $6 million dollars rotted as pigs rooted through them, the result of failing foreign markets and high tariffs. At the time, if Washington’s apples didn’t sell, orchardists paid $5 a ton to have their culls hauled off to rot.

Culls are rejected from the fresh fruit market due primarily to shape, size, or color, but they are perfectly sound for such traditional uses as juice. The photograph aptly illustrated the need for a processing company like Tree Top, which is celebrating its 50th anniversary and is the subject of a new history by David Stratton and published by WSU Press, as an integral part of the tree fruit industry. 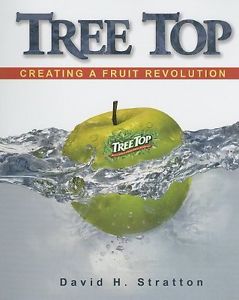 In Tree Top: Creating a Fruit Revolution, Stratton relates an assessment of the three major developments that transformed the apple industry: the switch from apple boxes to bins, controlled atmosphere storage, and the success of Tree Top.

Started by William Henry Charbonneau, described variously as eccentric, perfectionist, irascible, and roughshod, Tree Top from the beginning created an economic cushion for growers, a safety net against a volatile market. With its original plant and offices in Selah, Tree Top began by making filtered juice of local surplus and cull apples, then spread throughout Washington’s apple growing region.

Although the beginnings of Tree Top go back to 1944, when Charbonneau bought Pomona Products Company, the company’s true potential did not reveal itself until he turned it into a grower cooperative and made himself general manager in 1960. Supply was the driver for the move. Building a company on the growers and guaranteeing that it would buy everything brought in, a policy that endured until last year, Tree Top solidified its supply and set the stage for great expansion. Charbonneau’s insistence on the goodness of the juice is what built the company’s reputation and grower loyalty.

Despite setbacks in the mid-80s and during the fruit industry downturn in the early 2000s, Tree Top has continued strongly to the present, expanding its products from the original juice and juice concentrate to many apple and pear products, from pear-based sweeteners to the dried “blueberries” in your breakfast cereal, which are actually colored dried apples.

But Charbonneau’s major contribution was the introduction, following the citrus industry’s lead, of frozen concentrated juice. Not only did the concentrate meet immediate consumer approval, the greatly reduced volume and weight made national expansion of Tree Top’s market possible.

“Today, “ writes Stratton in his preface, “in fulfillment of Charbonneau’s vision, Tree Top’s seven plants produce apple juice and cider as the backbone of its retail market in 30 states, with the core outlets in the West and Southwest, and also distribute consumer packaged goods, such as fresh apple slices, blends with other juices, and apple sauce.”

The Tree Top cooperative currently has approximately 1,100 members, down from its historical numbers. But acreage has increased significantly. “This profile of fewer growers, but larger holdings,” writes Stratton, “reflected a continuing trend in the overall Washington apple industry.”

Stratton’s book joins another recent work as a major contribution to the history of the tree fruit industry in Washington. He credits WSU graduate student Amanda L. Van Lanen for her help in the research and writing of Tree Top. At the same time Van Lanen was also finishing her dissertation on the history of the Washington apple industry, “We Have Grown Fine Fruit Whether We Would or No”: The History of the Washington State Apple Industry, 1880–1930. A fine read, it is available electronically through the WSU Libraries website.