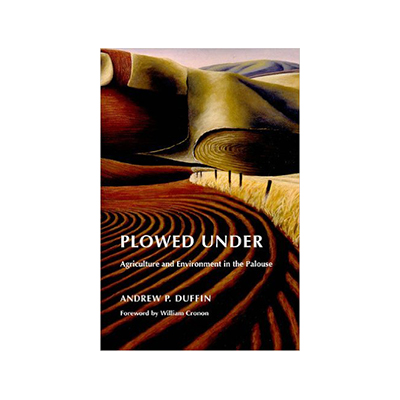 This is an important and disturbing book, both for the environmental degradation it documents and the message of what little progress our agricultural practices on the Palouse have made.

In a sense, the precursor of Plowed Under was a series of lectures by William Spillman in 1924. Spillman, a versatile and prescient scientist, was one of Washington State Agricultural College’s first faculty members, hired by President Bryan in 1894. Hired away by the U.S. Department of Agriculture, he returned to the Palouse to deliver a series of lectures, in which he criticized what he considered the egregious error of planting everything to wheat. He urged the return to “balanced farming,” in which animals would graze the steep and highly erode-able hillsides, while the flatter areas would be planted to crops.

Spillman was not the first to warn of the hazards of soil erosion on the Palouse. Unfortunately, he was one of many to be largely ignored, their Palouse farming audience in tune to more enticing incentives than soil stewardship.

Duffin’s book is basically the story of cyclical warning and denial. Some soil scientist or government agency will make some modest impact on farming practices, convincing a modest number of farmers to at least reconsider their ways.

Then along comes one of those overriding incentives. First it was World War I and its need for wheat to feed Europeans whose farms had become battlefields. Profit and patriotism easily trumped soil conservation, and farmers increased their production dramatically. Worry about losing a little of what farmers believed an endless supply of topsoil had little effect compared to slogans like “Wheat will win the war.”

That enthusiastic production was cheered on after the war. The Wilson administration encouraged farmers to “raise such big crops” that the hunger created by the Great War would never occur again. The Farmer magazine urged farmers to seek out every little bit of wasteland, field corners and wasted fencerows, for every bit of land not planted was profit lost.

In spite of notable accomplishments over the decades, such as the founding of the Soil Conservation Service in 1933, contour tillage, the very effective conservation tillage, the Conservation Reserve Program, and other soil conserving programs and practices, the majority of farmers continued to let short-term gain blur the loss of their topsoil. World War II again added profit to farming every inch. The advent of herbicides and anhydrous ammonia fertilizer increased productivity with no apparent need to stem soil runoff. Finally, today, price support subsidies provide great incentive for planting and little for conservation or alternative crops.

At the root of the problem was that there was no clear-cut proof that soil erosion led to reduced productivity. For one thing, even though ridges and knobs had lost much of their topsoil by early 20th century, overall, the loess was plentiful and deep, built up by thousands of years of southwest prevailing winds depositing the rich glacial silt.

My only frustration with the book derives from what it is not, rather than what it is, an agricultural history that began as a dissertation. As such, it is not a book that will keep you alert late at night. More important, I’d hoped that Duffin would have incorporated at least some modern scientific perspective, including interviews with wheat breeder Stephen Jones, crop and organic researcher John Reganold, and natural historian and fourth-generation Palousian Rich Old ’77, ’81, let alone the older farmers themselves, especially those who have made heroic efforts to maintain their soil.

But of course I’m thinking of a much bigger book. It’s too bad that academia’s aversion to hiring its own barred Duffin from a place he had just started to understand and chronicle. His continued presence and research into our agricultural legacy, I believe, could do much to raise our awareness not only of our rich history and contribution to the world food supply, but also of the marvelous resource that we continue to squander.