The new apple, developed at Washington State University and grown—at least for now—only in Washington, is good in both sweet or savory dishes as well as raw or cooked, standing up to heat and holding its shape and texture.

Its myriad culinary uses include brightening soups, sauces, salads, slaws, and salsas⁠—and even topping pizza. Of course, with its satisfying snap-crunch, the flavorful Cosmic Crisp, a registered trademark, is a good eating apple, too—raw and right out of your hand, or sliced and served with brie or dipped in peanut butter or cinnamon sugar.

It is, if we do say so ourselves, quite possibly the perfect apple.

Here are a few ways to enjoy Washington’s newest fruit…

This new cake, specially created for Cosmic Crisp apples by celebrity chef Chadwick Boyd and perfect for the holidays, not only treats the fruit like a flavorful ingredient but also a beautiful adornment. When baked, Cosmic Crisp apples retain their shape and some of their crimson color, resembling heirloom red glass baubles.

1 to 2 teaspoons glittery sugar, if desired

Wash Cosmic Crisp apples. Leave skin on. Using a fork, pierce the bottoms of the Cosmic Crisp apples in a cross pattern, about ¾-inch deep. Reserve ¼ cup sparkling wine. Then combine the poaching liquid. Stir together the wine, water, and sugar in a large pot or 4-quart Dutch Oven. Drop in the vanilla bean and star anise; bring to a boil. Place apples in poaching liquid. Reduce heat to medium low. Cover. Poach apples for 10 minutes or until just barely tender. Using a large slotted spoon, turn apples twice during poaching time. Carefully remove apples to a plate; cool slightly. Discard the star anise and vanilla bean from poaching liquid. Return heat to high. Bring poaching liquid to boiling. Boil, uncovered, for 20 minutes or until liquid reduces to ½ cup, has a syrup-like consistency, and turns light amber in color. Remove from heat; let cool. Syrup will continue to thicken as it cools.

Meanwhile, place rack in the center of the oven; preheat oven to 350 degrees. Prepare cake batter. Lightly butter the bottom of a 10-inch springform pan. Line with parchment paper. Butter the parchment paper and the sides of the pan. Set aside. In a medium mixing bowl, whisk together the flour, baking powder, and salt. In a stand mixer fitted with the paddle attachment, beat the butter, sugar, and vanilla on medium speed for 1 minute. Scrape down the sides of the bowl and the paddle, beat 1 minute more. Add the eggs, one at a time, beating 1 minute after each. Add the sparkling wine; beat 30 seconds more. (The mixture will look shaggy). Slowly add the dry mixture, beating on low speed for 1 minute. Scrape down the sides of bowl and the paddle; beat 30 seconds more. Transfer batter to the prepared pan. Smooth batter using a rubber scraper. Gently place the apples into the batter, making sure they do not touch the bottom of the pan. Evenly sprinkle the 2 teaspoons sugar on top.

Bake for 1 hour 20 minutes or until a toothpick comes out clean from the cake near the center apple. Loosely cover with parchment or foil if the cake starts to brown too much. Transfer cake from oven; place on a wire rack. Cool completely, at least 2 hours. Using a table knife, gently loosen cake edges from sides of pan. Remove sides of springform pan. Using a very wide spatula, transfer cake from bottom of springform pan to 12-inch stand or plate.

Gently brush wine reduction on top of cake, using a pastry brush. Sprinkle with glittery sugar, if desired. Using a serrated knife, cut cake into 8 to 10 slices, being extra careful when cutting through the apples. Serve cake slices with a dollop of whipped cream, if desired.

To make the Cosmic Crisp Ornament Cake even more festive: Add a touch of fresh ginger to the poaching liquid or the batter. Cinnamon, cardamom, or nutmeg would also bring a warm, cozy flavor to the cake.

Pro tips: Cosmic Crisp apples weighing 9 to 10 ounces are best suited for this recipe. Use the smallest apple for the center. When arranging, the apples may touch the outside of the pan—that’s OK. Gently smoosh the center apple in place, if needed. It may sit up a little higher than the other apples, like a star on a tree. It will settle a bit. 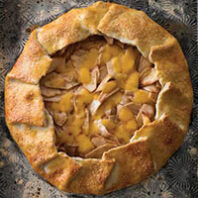 For the dough glaze:

Transfer mixture to a bowl and sprinkle a tablespoon of water at a time over the dough, mixing it with a fork. When it begins to come together, gather the dough and shape it into a disk. Wrap in plastic and refrigerate at least 15 (and up to overnight).

Make the filling: Stir together sugar, brown sugar, and cinnamon, then toss with apples. Add melted butter, flour, lemon juice, and salt, and toss again. Stir in ¼ cup of the cheese.

On a lightly floured surface, roll dough to a ⅛-inch thick, 14-inch circle, adding flour to surface while rolling to prevent sticking. Gently fold dough into quarters and transfer to a baking sheet, opening up quarters to make a flat circle.

Arrange apples on center of dough, leaving about a 3-inch border. Fold dough edges up and then pleat over apples.

Make the dough glaze: Brush the crust with cream or milk and sprinkle with sugar.

Bake until apples are tender and crust is golden brown, about 45 to 50 minutes. Remove from oven, sprinkle remaining cheese over apples, and cool to room temperature.

Note: If the dough has been refrigerated for more than an hour, allow it to sit at room temperature 15 minutes prior to rolling. 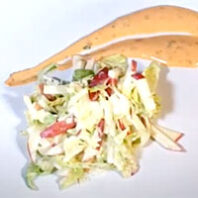 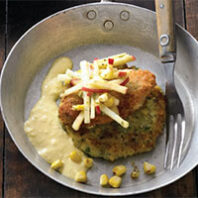 This recipe didn’t originally specify apple type. But that was before the Cosmic Crisp hit the market.

Gently fold together apple, jicama, and Champagne vinaigrette; season with salt and pepper.

From The Crimson Spoon by Jamie Callison, WSU executive chef

1 egg (can be omitted for a lighter version)

Note: Chef Callison’s Apple Jicama Slaw pairs well with his Pan-Fried Northwest Oysters and Corn Fritters with Sweet Corn Purée. Those recipes can be found in The Crimson Spoon. 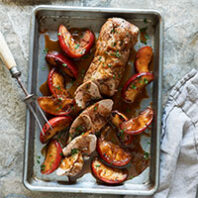 Pat tenderloins dry and season with salt and pepper. Heat oil in a 12-inch oven proof skillet over moderately high heat, brown tenderloin on all sides, turning with tongs, about 5 minutes. Place skillet in upper third of oven and pour in half of the chicken stock. Roast until a thermometer registers 135 to 140 degrees (final temperature 145 degrees for medium), 12 to 15 minutes, turning halfway through. If the skillet becomes dry, add a teaspoon of stock or water. Transfer meat to a platter, cover loosely with foil, and allow to rest for 10 to 15 minutes.

Meanwhile, butter in the skillet, add shallot and apple wedges, and sauté, turning occasionally until tender and golden brown, 5 to 7 minutes. Transfer to a plate. Add garlic to pan and cook for 1 minute. Add the remaining chicken broth, cider, and wine to skillet, scraping up any browned bits, and cook on medium high until sauce reduces, about 5 to 10 minutes. Remove from heat and stir in the cold tablespoons of butter a few at a time and any pan juices collected from tenderloin.

Cut meat into ½-inch slices and serve topped with apples and sauce, adding a little parsley, whole or chopped for garnish. 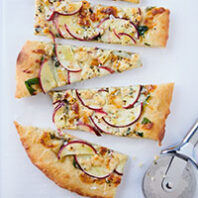 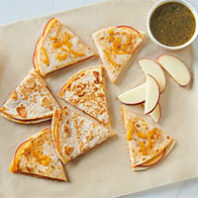 12 to 16 ounces shredded cheddar or your favorite cheese

Option One: Sprinkle 2 to 3 tablespoons cheese over one half of the tortilla. Place several apple slices, barely overlapping, on top of cheese, then sprinkle 2 more tablespoons of cheese on top of the apples and fold tortilla in half. Repeat with remaining tortillas. Melt half of the butter in a skillet over medium heat and cook as many tortillas that fit until cheese melts on first side, turn until cheese is melted on second side. Add the rest of the butter and repeat with remaining tortillas. 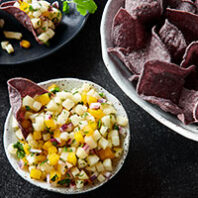 New stars on the market shelf

Cosmic Crisp, WA 2, and the what’s next