It’s inherently festive. Crimson in color and flecked with tiny golden starbursts, this attractive apple might just make for the ultimate holiday fruit. And, with its long storage capability, it’s also quite possibly the perfect pome for riding out a pandemic.

Cosmic Crisp® apples were bred to maintain their flavor—sweet, tangy, tart but not too sharp—as well as texture—crisp, firm, juicy but not watery—for up to a year in commercial cold storage. Even when cut or cooked, they’re naturally slow to brown, retaining their pleasing appearance.

Since their release a year ago, Cosmic Crisps, bred at Washington State University specifically for Washington’s climate, have proved to be out-of-this-world. 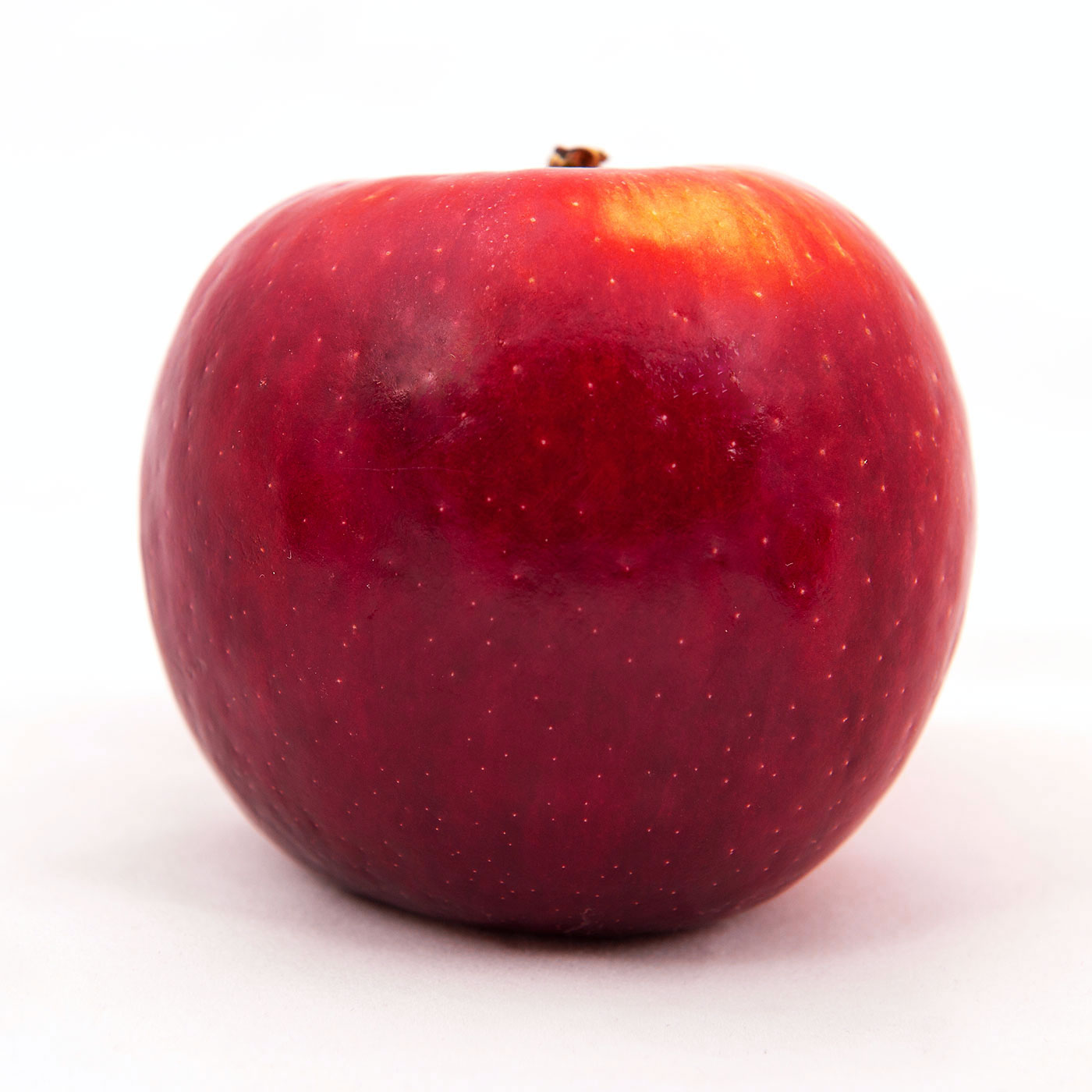 Good Housekeeping awarded the Cosmic Crisp, a WSU registered trademark, its “Nutritionist Approved” emblem. America’s Test Kitchen tasters scored it “significantly higher than the other apples,” noting the variety sports a thick skin that “snaps when you bite into it.” That satisfying crunch was also noted by GeekWire, which declared, “The high crunch and firmness of the flesh are deceptive since the overall impression is light rather than dense, and there is very little softness or grittiness.”

Not only is the new apple exceptionally good for eating fresh, it stands up to high temperatures in the oven or on the stovetop. “Cosmic Crisp is truly the most versatile apple on the market,” says Kathryn Grandy, chief marketing officer for Proprietary Variety Management, which helps get new fruits to the global marketplace. “I’m totally hooked on Cosmic Crisp. It’s amazing to bake with. It holds its texture and shape. But when you put your fork through it, it doesn’t fight back.”

It is, says Jamie Callison, executive chef of WSU’s School of Hospitality Business Management at Carson College, “a beautiful apple.” He would regularly buy different apples for particular purposes: Granny Smiths for baking, Honeycrisps for salads and cheeseboards. The Cosmic Crisp’s versatility, he says, is “why it’s going to be successful. It’s durable and ships well and stores well. So it’s a win-win for producers and consumers,” particularly during the current novel coronavirus pandemic, which has some shoppers limiting trips to the supermarket.

Flavor-wise, Callison says, the Cosmic Crisp is “a perfect balance of sweet and tart. It’s a hardy apple, too, so it holds up in galettes and pies. I love cooking with apples. But, sometimes, you get apples that fall apart when you bake them. Not these.” And, because of their inherent sweetness, Grandy says, “you don’t need to mix them with other apples, and you can significantly reduce the amount of sugar.”

Use the Cosmic Crisp in sweet or savory dishes, such as tarts, streusels, cobblers, upside-down cakes, salads, and salsas. The apple also pairs well with chicken, pork, and, Callison says, “of course, Cougar Gold cheese.” The sharpness of WSU’s signature canned rich white cheddar complements the apple’s sweetness. “They balance each other out,” Callison says, also noting, “Brie is always good with apples.”

Callison featured Cosmic Crisps in a slaw paired with crispy pan-fried Northwest oysters from his 2013 cookbook The Crimson Spoon, published by WSU Press, during one of the WSU Alumni Association’s Feast of the Arts events last year. “I was able to showcase the Cosmic Crisp the weekend it was going to market, which was an amazing opportunity,” says Callison, who’s also featured the apples in class. “I gave them to students and challenged them to be creative and come up with their own dish.”

Chalk up the apple’s appealing attributes to good breeding. Premium-priced and non-GMO, the Cosmic Crisp is the product of 20 years of extensive research and development by WSU’s pome fruit breeding program, with support from faculty and staff throughout WSU Tree Fruit Research and Extension as well as the Department of Horticulture in the College of Agricultural, Human, and Natural Resource Sciences. “We have all of these different people who are helping to develop protocols for the best ways to grow them, the best time to harvest them, and how to store them,” says Kate Evans, leader of WSU’s pome fruit breeding program since 2008, when she succeeded Bruce Barritt.

The retired WSU horticulturalist started lobbying for funding from the University and industry partners in the early 1980s to launch an apple breeding program. Red Delicious had dominated production for decades, and Barritt cautioned against depending too much on a single variety. In 1994, after funding came through, Barritt and his team began producing thousands of hybrid seeds and sampling the results, including WA 38, the 1997 cross that produced the Cosmic Crisp. Two years later, the first Cosmic Crisp seedling was planted. But the first commercial plantings didn’t go into the ground until 20 years after hybridization.

“It takes a lot of time to produce a new variety,” says Evans, noting work is ongoing. “We have apple selections in every stage all the time. The bad ones are discarded, and the good ones move to the next stage of evaluation.”

Nearly 500 Washington growers have so far planted some 15 million Cosmic Crisp trees. Because the state’s apple industry helped fund the research, they enjoy the exclusive right to grow the new variety in North America for 10 years. That’s part of their allure, according to Evans and Grandy.

Consumers in statewide focus groups were also enamored with the little spacey sparkles on the apple’s deep ruby-red skin. “Cosmic” became part of the name because of those lenticels, or pores, reminiscent of distant stars. “Crisp” describes its texture while paying homage to one of its parents, the popular Honeycrisp. Its other parent is the Enterprise. Another fun fact: Cosmic Crisp is the first apple variety to be named by consumers.

Washington is America’s top apple producer, growing nearly 60 percent of the country’s crop of about 135 million boxes that rake in about $3 billion. In all, about 1,300 growers cultivate apples on some 175,000 acres, largely in Central Washington.

Cosmic Crisp finally hit supermarkets nationwide in late 2019 with a five-year, $10.7 million marketing campaign. Unless you were living on another planet, you couldn’t miss its release. The apple has its own Instagram, Twitter, and Facebook accounts, plus a Pinterest page, YouTube channel, and website. And it’s made headlines in the Los Angeles Times, New York Times, Seattle Times, Wall Street Journal, USA Today, Popular Science, Time, and more.

“I call it the billion-dollar apple,” Grandy says. “I don’t know that that’s an accurate number, but to me it feels like our growers have spent hundreds of millions of dollars. They’ve made just an enormous investment.”

That support, she says, has helped the Cosmic Crisp exceed expectations “many times over. It sold out everywhere we sent it.”

Where to find the Cosmic Crisp—from products to advertising

These apples aren’t just located in the produce aisle.

Since its debut a year ago, the Cosmic Crisp has made its way into select specialty products—from pressed juice to high-end chocolate—as well as sponsorships of community and educational programs and organizations. Its marketing campaign doesn’t only aim to promote the new apple but also the common good, including creativity, and opportunity.

“Yes, we want to promote ourselves and our apple,” says Kathryn Grandy, chief marketing officer at Proprietary Variety Management, the commercialization company for Cosmic Crisp. “But we want to do so in a meaningful way.”

To that end, Cosmic Crisp, a registered trademark, has made STEAM education part of its purview. It’s the national sponsor of the national tour of Johnny Appleseed by the Missoula Children’s Theater, the largest nonprofit traveling children’s theater in the world.

Partnerships like this seem natural, says Grandy. After all, the idea of dreaming big is rooted in the very core of the apple. In fact, it’s trademarked “The Apple of Big Dreams.”

The Washington State University horticulturists who bred the apple, Bruce Barritt and Kate Evans, “had a big dream,” Grandy says, noting that promotion of achieving big dreams is part of the apple’s campaign. “It’s not just an advertising program. It’s something that means something. And I think that’s really important. I think that’s part of the reason it’s been very well received.”

The apple won the top spot in Prevention Magazine‘s 2020 Healthy Food Awards for Produce and was featured on the March cover. It marked the first time an apple graced the cover of the magazine. For more of Cosmic Crisp in the media, visit cosmiccrisp.com/latest-news.

Stay tuned. “New and exciting” marketing efforts are slated to debut late this fall to build buzz for the apple’s second season at market. In addition to the produce aisle, the Cosmic Crisp appears in several particular products.

Here’s a select round-up of media coverage, plus a few more links about Washington state apples.

Is it really out of this world or what?  (Allrecipes taste test)

An overview of apples in Washington state  (WSU Extension)

The development of the Cosmic Crisp apple  (WSU Foundation)

Beyond the Honeycrisp apple  (The New York Times, 2015)

What is a Cosmic Crisp apple?  (America’s Test Kitchen)

Make the most out of the latest, greatest apple—the Cosmic Crisp  (Popular Science)

From the archives: The spice of life: Apples come in more than one variety  (Cosmic Crisp breeder Bruce Barritt talks apples in the Fall 2005 issue of Washington State Magazine)

Recipes for the Cosmic Crisp apples