Keeping a watchful eye in remote environments with aerial drones

Stealing through the shadowed plantation, an orangutan stops to feed on the tender shoots of a palm sapling. An instant later, she crumples from a rifle shot, her baby crying out in fear. The infant is eventually rescued and spirited away to a rehabilitation center for release back into the wild.

“At one time there were 2,500 of these orphans in Borneo,” says Chuck Pezeshki, a professor of mechanical and materials engineering at Washington State University. “It’s an enormous tragedy and the apes are now on the endangered list.”

Pezeshki says the native rainforest favored by orangutans is rapidly being cleared to make way for lucrative palm oil estates. Forced to become scavengers, the displaced primates creep into villages seeking food where they are often killed and the babies sold as pets or left behind. Orangutan numbers have consequently fallen to half their 1950 level.

In an effort to help restore these populations, Pezeshki and his senior students in the Industrial Design Clinic are developing a radio tracking system to monitor the survival rates of reintroduced apes. Working in collaboration with ConservationDrones.org and U.K. biologist Serge Wich, the tracking device will be deployed in Borneo using a commercial quadcopter and video camera.

The tracking system will also be adapted for use in aerial surveys of endangered African painted dogs in Zimbabwe.

Since 2012, design clinic students have undertaken challenging projects like these  for nonprofit organizations free of charge. The clinic, which Pezeshki began teaching in 1994, typically asks a fee for projects with for-profit corporations like British Petroleum or Boeing. Over time, these projects generated a reserve fund which allowed Pezeshki to begin supporting nonprofits.

“The concept of us tithing and giving back is important,” he says. It is also important to grant nonprofits the same customer standards they use for industry: In order to pass the class, students must create a product the client can actually use.

Pezeshki’s first nonprofit project was with Mobility Outreach International, a company that develops low-cost prosthetics for manufacture in Sierra Leone. “We made a prosthetic foot and ankle that could be built from recycled materials and repaired locally,” he says.

Encouraged with the results, Pezeshki sought out ConservationDrones.org in an effort to help the orangutans. He soon signed on for a second project with Carrie Culp and the Painted Dog Research Trust USA in Seattle. 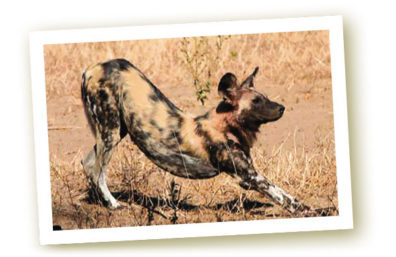 With large, spoon-shaped ears and showy calico coats, painted dogs were once a common sight throughout sub-Saharan Africa but today are threatened with extinction from relentless hunting, habitat loss, road kills, and disease.

Pezeshki says painted dogs are unique in caring for sick and elderly members of the pack. A “doctor” dog will even be assigned as caretaker, regurgitating food, licking wounds, and staying with an injured animal until it recovers. Unfortunately, if one dog is caught in a snare trap, the whole pack stops, providing easy prey for shotguns.

For several semesters, Pezeshki’s students have labored over the construction of an unmanned airplane that will improve scientists’ ability to track and protect painted dogs in Zimbabwe. They want to build a low-cost radio telemetry drone able to fly over 120 kilometers and detect signals from collared dogs within a 2-kilometer range. The first step was to make it fly.

On a bone-chilling, blustery day last December, the team drove their fiberglass plane to Lewiston, Idaho, for its eleventh attempted test flight. Despite strong winds that afternoon, great cheers of delight and relief filled the air as the drone performed flawlessly.

Pezeshki was impressed but says there is still work to be done. Although the drone is radio controlled for takeoff and landing, the flight path will be programmed through an automated Pixhawk system yet to be installed. He’s confident they will ship a functional plane and tracking system by the end of the year. “The clock is running for these animals,” he says. “So we persevere.”