A jar of foul-smelling clay sits on the cluttered workbench. “I’d better not open it,” says environmental engineer Richard Watts. He grabs a smaller jar filled with liquid the color of a dirty mud puddle. “These are soil and groundwater samples from an industrial waste site in North Carolina.”

The repugnant samples arrived in comparatively pristine Pullman to be analyzed by Watts, who then advises the best ways to remedy the mess. In a twist, one of those methods involves the use of sugar.

Watts, a pioneer in oxidizing systems for the detoxification of polluted soil and groundwater and a professor of civil and environmental engineering at Washington State University, has recently begun using glucose to help break down the worst of chemical pollutants.

“It usually gets 90 percent of the contamination and we rely on natural processes, like bacteria, to break down the rest,” he says. “Activated persulfate can degrade almost all toxic organic chemicals including DDT, gasoline, dry-cleaning solvent, degreasing solvents, and the carbon tetrachloride found under the Hanford site.”

Watts says tens of thousands of old hazardous waste sites remain hidden away behind small businesses and rundown service stations throughout the United States. “Dry cleaners dumped solvents out on the ground behind their shops,” he says. “And in the 1930s and ’40s people built underground gasoline tanks they thought would last forever, but have now corroded and leak into the groundwater.

“We also have the big industrial properties with huge waste landfills plus spillage and exotic chemicals,” Watts says. “Our military bases are some of the biggest polluters.”

The consequences of industrial pollution first hit home for America during the 1970s, says Watts. A series of environmental disasters—from the deadly dioxin spill at Times Beach, Missouri, to the toxic chemical dump in Love Canal, New York—shocked the nation. The media covered the events widely, and prompted the creation of the Superfund act in 1980, which gave the U.S. Environmental Protection Agency (EPA) the authority to clean up hazardous waste sites.

Environmental engineers faced the daunting realization that our nation’s soil and groundwater were extensively contaminated, Watts says. “Since bacteria were already being used in wastewater treatment plants and could metabolize almost anything, they decided to try them for breaking down industrial pollution. They called it bioremediation.”

Though successful to a point, many chemicals, like DDT, resisted bacterial breakdown and could persist in the soil for decades or centuries.

As a young researcher in the mid-1980s, Watts was determined to find a faster method. Using his background in oxidative chemistry, he discovered that pumping concentrated hydrogen peroxide into the soil—along with iron to activate it—could release super oxidizing molecules called free radicals.

“Oxidation is basically a destructive process,” he explains. “When you bleach your hair, you are destroying color molecules. Using Oxiclean® in your laundry releases the dirt in your clothes.”

As it turned out, the powerful oxidizers in hydrogen peroxide could break down toxic waste faster and more completely than bacteria could. In short order, the EPA began funding Watts’s work.

Fast-forward 24 years, and ISCO has become one of the world’s standard methods for remediating industrial waste—used to clean up everything from small spills to massive federal Superfund sites. Today, Watts routinely provides chemical analyses and recommendations for engineers in the field.

But despite ISCO’s success, there were still a few kinks in the technology. Problems with the common oxidizing agents stymied Watts. Hydrogen peroxide, though cheap, is unstable, explosive, and disappears quickly when injected into the ground. Persulfate, on the other hand, can last weeks or months in the soil, but is difficult to activate and by itself is powerless.

One day puttering in the lab, he made a surprising discovery. “I can’t remember why I put glucose in with persulfate,” Watts says, “but when I added it, it started bubbling and doing all kinds of crazy stuff. I thought, ‘Wow! Maybe this is a good way to activate it!’”

Further experiments proved it out and today sugar-activated persulfate holds promise as an enhanced tool for the disposal of toxic waste. “Glucose keeps the process working longer and more reliably, so it will give engineers a higher degree of control over the system,” he says.

Not a moment too soon. While many of the “easy” Superfund sites have been successfully cleared, Watts says the roughly thousand still scattered throughout the nation are some of the most difficult to remedy. Fifty-three are in Washington state alone where bygone smelters, lumber mills, agriculture, and manufacturing left a legacy of hazardous waste.

Today, those sites are being restored under the guidelines of Washington’s Model Toxics Control Act, enacted in 1989. Watts’s improved ISCO technology is a natural fit and could eventually aid cleanup efforts at locations such as Fairchild Air Force Base and Kaiser Aluminum Mead Works in Spokane, Commencement Bay in Tacoma, Wyckoff-Eagle Harbor on Bainbridge Island, and Bangor Naval Submarine Base in Silverdale. 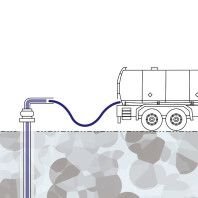 Contaminated soil and groundwater samples are analyzed in the laboratory to determine the most effective concentrations of glucose and persulfate. The reagents are then trucked to the site, mixed, and then injected into the affected area.