When retired French soldier Pete Pieri settled in Walla Walla around the turn of the 20th century, he planted onion seed he had brought from Corsica. His new neighbors, Italian gardeners who had settled there earlier, admired the ability of the onion to winter over in the ground, which gave it a good size for an early summer harvest. The bonus, notes Walla Walla horticultural historian Joe Locati, was its mild flavor. The Italians called it the “French onion” (though it was actually Italian), and by 1910, it was about the only summer onion grown in the area.

In late May this year, Paul Castoldi and I admire his field of the French onions, now called Walla Walla Sweets, which he will begin harvesting in less than a month. 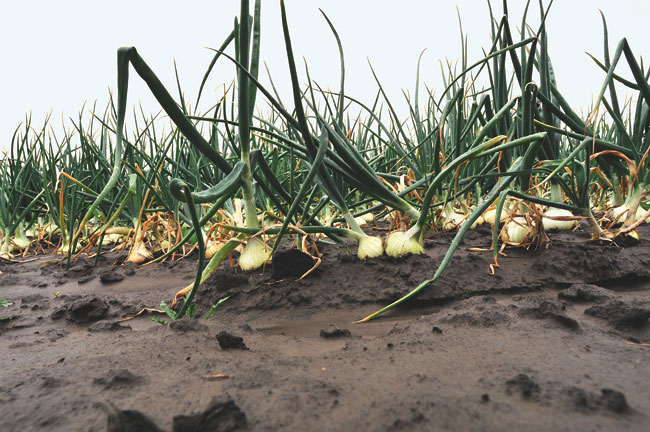 Castoldi ’83, a descendant, like Locati, of one of the first Italian families to start farming around Walla Walla, farms with his brother Bob and nephew Nathan. This year they have about 26 acres of Walla Walla Sweets. They also grow hybrid sweet and red onions as well as other vegetables.

In spite of the onion’s wide name recognition, nationally as well as throughout the Northwest, Walla Walla Sweets are grown by only about 30 farmers on fewer than a thousand acres within a 15-mile radius of the spot where Pieri originally planted his seed. Even so, a thousand acres can produce a lot of onions. In a really good year, says Castoldi, you can get 700-800 50-pound bags of onions per acre.

Growing Walla Walla Sweets is not something you just jump into. The timing and observation required for correct planting and subsequent crop maintenance are not things you get from an instruction manual. Onions require a lot of hand labor, including at least one, sometimes two, hand-weedings. Although storage onions can be harvested by machine, Walla Walla Sweets are too soft and, except for the tractor-assisted “lifting,” must be harvested by hand.

Spring onions are vulnerable to onion thrips, which carry a virus that can stunt the crop. Overwintering onions are susceptible to fungal disease. The cool, wet weather the area experienced in May can lead to gray mold or white rot.

Locati, in his excellent Horticultural Heritage of Walla Walla County: 1818-1977, writes about the arrival of white rot. Locati was a state inspector in 1959 and noticed a “burned-out circle” in one of his neighbor’s onion fields. After pulling up a few onions, he found white mold and embedded sclerotia, the fungus seeds. “The dreaded white rot was here!”

Locati worked with WSU Extension plant pathologists Marion Harris, Seth Locke, and Otis Maloy, and agriculture dean Louis Madsen and others to contain the white rot. Eventually, they developed different cultural and chemical practices to check the disease—though once in a field there’s no getting rid of white rot altogether.

A few miles out of town on the highway to Lowden, Terry Bergevin, who attended WSU in the 1960s, is one of the rare growers whose roots do not go back to the first Italian gardener families. He grows anywhere from 20 to 80 acres of onions, “depending on how we feel about it,” he says. Onions figure only about 10 percent of his production, which also includes asparagus, grain, garbanzo beans, canola, and some soybeans this year for the first time.

Bergevin has been growing onions for about 30 years. One of the biggest changes he’s seen over the years has been in the marketing and distribution of Walla Walla Sweets.

“Twenty-five years ago, when they packed them, they owned them,” he says, referring to the transfer of the onions from field to packinghouse. “Then somebody got ingenious and decided they’d become custom packers. Now basically you own them all the way,” shifting the brunt of the risk to the growers.

Within that framework, Bergevin plans his crop for a quick harvest turnaround. Castoldi, who markets much of his crop directly, aims to spread the harvest as long as possible, using different strains of the sweet onions to stretch the season from mid-May to mid-September.

“Each family would select their own seed, have their own variety,” he says of the local tradition. “My dad and uncle started selecting, especially for a super early variety.” That May morning, he had been harvesting early spring salad onions.

Other regions of the country might boast their own sweet onions, but never Walla Walla Sweets. Under a federal marketing order established in 1995, Walla Walla Sweets can be grown only within the Walla Walla Valley, north to the Tucannon River and south just into Oregon. Anyone outside that area can grow Walla Walla Sweet seed, but they can’t use the name. Still, some unscrupulous vendors will try to pass off other onions as Walla Walla Sweets. When reports of pretenders come in to the Walla Walla Sweet Onion Marketing Committee office, executive director Kathy Fry might jump on her Harley and head out to investigate. Usually, all it takes is a warning, says Fry, but if the offenders persist, the committee has the USDA to back them up.

In spite of their long and savory history, Walla Walla Sweets were not called Walla Walla Sweets until 1960, when the Arbini brothers were asked to ship samples for possible markets on the East Coast. Caroline Arbini and her sisters came up with the name to attach to the samples.

Walla Walla Sweets make up only about 10 percent of Washington’s total onion production, the remainder being primarily yellow storage onions. The high water and sugar contents that make Walla Walla Sweets so sweet and mild also mean they do not keep. So eat them when they’re ready, which is mid-June through September.

Walla Walla Sweets can be chopped up raw and used in salads, sautés, or salsas—or prepared like any other onion. But my favorite preparation, which is how I fixed several bunches of Castoldi’s spring salad onions, is very simple. I peel them, slice them thick, brush them with a little olive oil, and grill them until just browned. They don’t have to be soft all the way through. A little crunch is good. You’ll find yourself ignoring whatever else you’re grilling.

Unless, that is, you’re also grilling a certain sausage. In Walla Walla, I was kindly directed to a hole-in-the-wall restaurant at First and Main called Onion World. Owned by 16th district legislator Maureen Walsh, Onion World specializes in sausages made from pork and Walla Walla Sweets. I ordered one, ate it, then went back for another. The cook told me that happens all the time.