Here, she talks about the show’s beloved characters, her favorite season, her top ten reasons to love Bob’s Burgers, and more.

What are your top 10 reasons to love Bob’s Burgers?

Its characters are weird and sad, but the show posits that they are still worthy of love, a message I appreciate hearing on a regular basis.
Routinely excellent original songs.
The shifting dynamic between family as employees and family as family.
A fancy toilet speaks like Jon Hamm.
The siblings act like siblings.
Young … END_OF_DOCUMENT_TOKEN_TO_BE_REPLACED 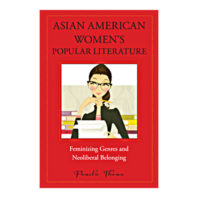 Since Nathaniel Hawthorne famously complained about the “damned mob of scribbling women” in 1855, much has changed in American literary and popular culture, not least the nation’s racial demographics, which now include substantial numbers of Asian Americans, as well as other people of color. And yet, the significance of women’s popular fiction continues to be overlooked, if not derided outright, by many social and cultural … END_OF_DOCUMENT_TOKEN_TO_BE_REPLACED

If you think Janet Jackson's wardrobe malfunction during the 2004 Super Bowl revealed nothing more than her naked breast, think again. » More ...
Spring 2007

For many years, the study of popular culture, like comedian Rodney Dangerfield, “got no respect.” Only with the vast amount of excellent, sophisticated research in the last three decades has the culture preferred by millions of Americans become serious history. LeRoy Ashby’s With Amusement for All: A History of American Popular Culture Since 1830 is the first book to synthesize hundreds of recent studies of specific aspects of popular culture into a single, sweeping story. Both in time frame—from the 1830s, when innovations in communication and transportation first made a truly mass, national culture possible, to the present era of proliferating new media—and in scope—including … END_OF_DOCUMENT_TOKEN_TO_BE_REPLACED

When it comes to fame and poetry, the locus classicus surely must be this passage from Milton’s “Lycidas”: “Fame is the spur that the clear spirit doth raise / (That last infirmity of noble mind) / To scorn delights, and live laborious days.” We of the 21st century have not so far shown ourselves much disposed to scorn any delights at all, most likely because we are not inclined to accept Phoebus Apollo’s sermon to the effect that “Fame is no plant that grows on mortal soil.” But the fame we encounter in the 51 generally short poems of Famous, by Kathleen Flenniken ’83, is … END_OF_DOCUMENT_TOKEN_TO_BE_REPLACED