They are cheesemakers, bookbinders, cowboys, bat wranglers, window washers, and lab managers. Often behind the scenes and performing essential work at Washington State University, staff members keep the university humming along. These are just a few of the hardworking people at the heart of WSU’s research and education mission. 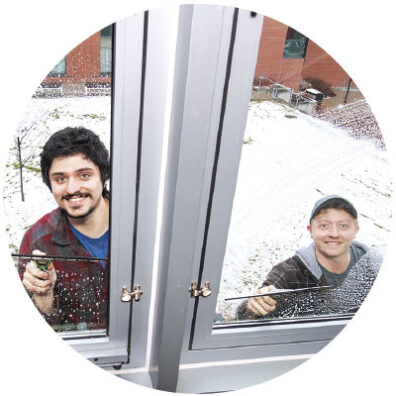 Joe Beck, Zac Howell, and John Jane share one of the most illuminating jobs on the Pullman campus. As window washers responsible for cleaning roughly 120,000 windows, they let in the light while also getting a first-hand look at academic activities.

“People willingly invite us into their space and tell us about their research or whatever they’re doing,” says Beck. “One time, I looked down a hallway and saw someone with a black puppy. But when I walked down there, it was a six-week-old grizzly bear. It was cool. His hair was like sandpaper.”

Beck and Howell follow in the capable footsteps of Barry Birdsell, who recently retired after 47 years on the job. Like Birdsell, the new crew has a few favorite buildings including Fine Arts, the TV and radio stations, and the raptor wing in the College of Veterinary Medicine.

“We see such interesting stuff,” says Howell. “It always changes.” 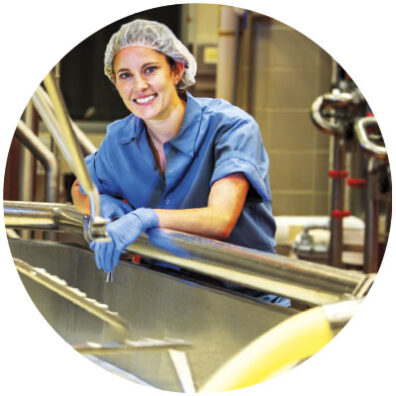 “When I get introduced to people for the first time and I tell them I make Cougar Gold cheese, they don’t believe me,” says Sarah Beale, head cheesemaker at WSU Creamery. “It’s kind of fun. Especially locally, everyone knows Cougar Gold.”

Beale has managed the day-to-day cheese-making operations at WSU Creamery for three years. Most days, she leaves her home north of Colfax at 5:30 a.m. in order to be at work by 6:30 a.m.

“We’re in the process of increasing production,” she says. “It’s half technology, half art. There’s a lot of science behind it, but it’s also a lot of feel.”

Cougar Gold, Smoky Cheddar, and Natural Cheddar take just over 24 hours to go from raw milk to the can. Viking cheeses, with their higher moisture content and lower acidity, are processed and canned in eight to ten hours.

“I have a lot of favorite flavors,” Beale says. “The Gold is obviously very good. I probably prefer the Viking cheeses, which are closer to a Monterey cheese.”

Read more about Beale and her work at the creamery. 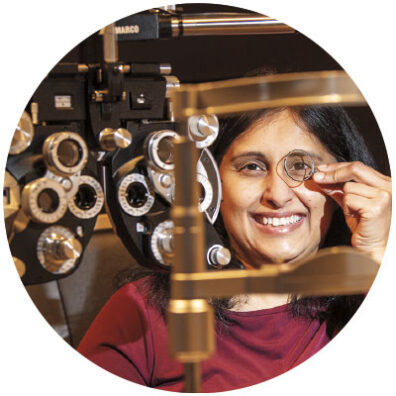 Rachna Narula got her first pair of glasses when she was in the first grade, and she’s been curious about eyes ever since. Now the optometrist at Cougar Health Services (CHS), Narula says her position gives her a unique opportunity to assist and educate WSU Pullman students.

“Whether it’s primary care or psychology, we’re all in the same building,” Narula says. “It’s nice to go upstairs and talk to other providers to get more perspective. There’s a lot of collaboration.”

They provide workshops on stress management, substance use, and violence prevention as part of their health promotion efforts. Narula also gives presentations to students interested in the optometry field.

“We do a lot of education,” Narula says. “With students, it’s typically their first time navigating health care on their own.” 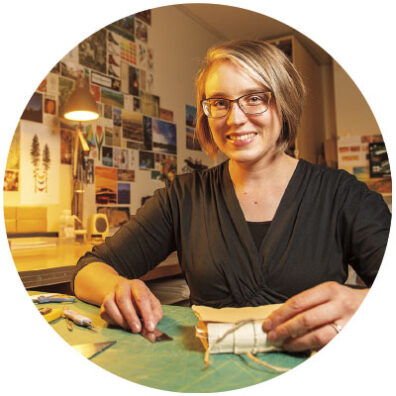 In the basement of Terrell Library, conservator Linnea Rash binds books, sews pamphlets, repairs paper, and tends to archived treasures. She makes a wheat starch paste in-house and her tools fold, cut, and crease. Through the last decade, she’s completed more than a thousand conservation projects for WSU Libraries. She flattens out rolled articles, encases fragile items in plastic, and builds boxes for books. In her toolkit are micro-spatulas, bone folders for folding and creasing materials, and some scalpels.

One of her favorite restoration projects was a small, black leather book of Gregorian chants from the 1550s. “It has a beautiful, simple decoration on the front,” she says. “It has these cool ties that hold it closed. I really love it.” 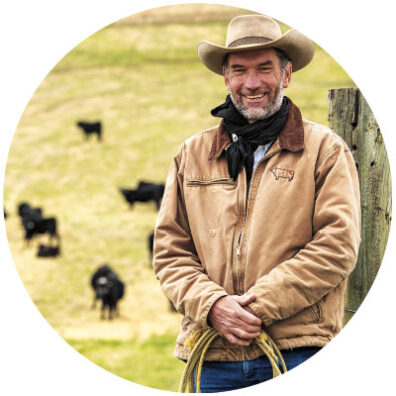 WSU’s cowboy Brent McCann watches carefully as approximately 200 head of cattle graze the hills about seven miles southwest of WSU Pullman’s main campus. McCann manages the Ensminger Beef Center, where he works with animal sciences students and faculty on research and training at the facility’s barns, fields, and classrooms. McCann brings over 25 years of experience in the cattle business, beginning from his youth in north central Montana, that helps him run the center as a functioning ranch.

Students work under McCann’s tutelage and learn all parts of the operation. And, he’s a student himself. “I work shoulder to shoulder with researchers and learn about genetics and feed research. It’s about improving beef production.”

McCann notes that the welfare of the cattle is paramount. “We need to keep in stride with the industry, hitting production goals, like above 90 percent conception rate, little or no sickness, all these things. You want cattle to do well.” 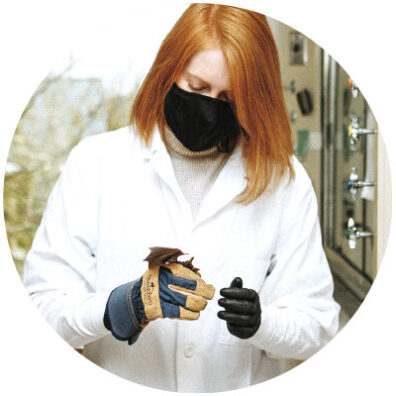 Managing two research labs can get tricky, especially when you throw in bats and zebrafish. Tamasen Hayward coordinates the lab work for neuroscientist Allison Coffin and biologist Christine Portfors at WSU Vancouver, where they study hearing loss and auditory systems.

Hayward (’15, ’17 MS Biol.) notes that bats need their hearing to survive and, unusually, can regenerate or compensate for hearing loss as they age. The Portfors Lab has about 30 short-tailed fruit bats, including four albinos, and the 40-year-old colony has been vital to research.

Several research projects in Coffin’s lab, including testing prescription drugs to see if they cause hearing loss, keep Hayward busy. Zebrafish are used in the lab due to an excellent organ system on the outside of their bodies that’s very similar to inner ear human cells.

Hayward supervises lab assistants, too. “One of my favorite parts of being the lab manager is being able to mentor the new undergrads and sometimes high school students,” she says.