Of course, Seattle’s iconic Space Needle is on the list.

Washington State University made the cut, too.

The most difficult part of the project, says J. Philip “Phil” Gruen, was narrowing down the list to a hundred significant sites in the state. “There could have been a thousand sites,” says Gruen, associate professor in the School of Design and Construction at WSU’s Voiland College of Engineering and Architecture.

Gruen recently served as one of the coordinators of Washington’s Classic Buildings for SAH Archipedia, an online encyclopedia produced by the Society of Architectural Historians. The site contains entries for more than 20,000 landscapes, structures, monuments, and buildings across America. Its open-access component, SAH Archipedia Classic Buildings, contains maps, photos, and peer-reviewed essays for more than 4,100 structures in all 50 states.

Gruen and Robert R. Franklin (’14 MA History), the other project coordinator and assistant director of the Hanford History Project at WSU Tri-Cities, were tasked in 2015 with selecting the most representative works of Washington state’s built environment. They enlisted the help of 25 colleagues statewide⁠—current and retired professors, graduate students, architecture professionals⁠—to document each location’s building materials, techniques, and styles, as well as social and political contexts.

“We could have made it easier on ourselves by just selecting old buildings or buildings designed by well-known architects,” says Gruen, who teaches modern and vernacular architecture, historic preservation, the global history of design, and the built environment of the Pacific Northwest, including local and regional landscapes of the Palouse. He also serves on Pullman’s Historic Preservation Commission and WSU’s Historic Preservation Committee.

Instead, he and his collaborators considered contemporary as well as historical structures, famous and lesser-known designers, rural and urban locations, and variety in structure type⁠—from private residences and places of worship to commercial buildings, including a tavern and a parking garage, to public spaces such as libraries, schools, and athletic arenas. Some of the sites that they considered don’t house buildings at all, but bridges, roads, or elevated tracks such as the Seattle Monorail.

Ultimately, Gruen says, these sites “had to be representative of the state. For us, that meant sites related to the landscape of the Northwest in some fashion. Most places we chose had some connection to the landscape or the context in which they sat⁠—be that sky, water, forest, mountains, or hills.”

Gruen and his team made sure to include places that are important to indigenous and underrepresented peoples, including women. “In my view, almost everything is significant⁠—if you’re willing to work hard enough to talk to the people, to do the research, to dig up the archives, and to understand that the built environment is more than just famous old buildings designed by old white men. Looking at sites that way, I think, is a type of social justice architecture.”

Geographical balance was also important and, in the end, Gruen and his team included sites in almost every county in Washington state. Some of the locations they chose contain multiple structures. In all, their list of 100 sites encompasses 235 separate entries, including 17 at WSU Pullman. Gruen and Franklin edited all of the entries, researched and wrote about four dozen entries, and photographed the bulk of them.

Above all, Gruen says, “we wanted to tell stories⁠—stories about place, about culture, about people.”

As a historian of the built environment, Gruen emphasizes interpretation and narrative as critical tools for reading human-made surroundings. His expertise lies in American architecture and urbanism of the nineteenth, twentieth, and twenty-first centuries.

“Historians tend to focus on design and style and names and dates. But, fundamentally, it’s meaning. How did the designs resonate? The life inside the buildings⁠—that’s how people begin to bring meaning to buildings,” Gruen says. “When we start to tell those stories, they become the architecture of the building, in many ways.”

A few of the 235 structures in Washington’s Classic Buildings 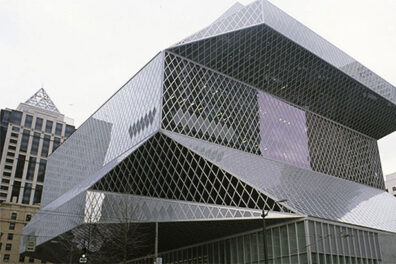 This is sleekness in Seattle, a library for the digital age, a dynamic, light-filled, and unconventional edifice with a distinctive diamond-shaped exterior grid of steel and glass. This is, writes Jaime Lynn Rice, academic program manager in WSU’s School of Design and Construction, “one of the few buildings to place Seattle firmly on the international architectural map.”

Completed in 2004 for nearly $170 million, the 11-story Seattle Central Library encompasses a full city block and more than 350,000 square feet. Its exterior planes resemble stacked volumes while interior spaces are open and flexible to adapt to changing needs. Rem Koolhaas and Joshua Prince-Ramus of the Rotterdam-based Office of Metropolitan Architecture designed the contemporary public space with exposed structural elements and dramatic uses of color. Escalators radiate an almost neon chartreuse. A spiral connects four floors of bookstacks via gently sloped ramps. A mixing chamber, modeled after trading rooms, holds more than 100 computers. A dumbwaiter carries books between the stacks and the chamber. 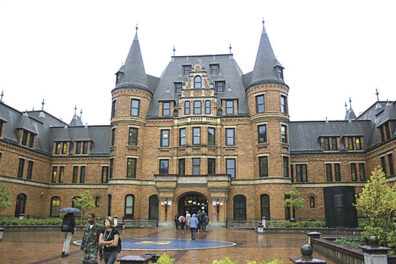 Construction started in 1891 on what was to become a luxury hotel resembling a French chateau. When a financial crisis hit two years later, the unfinished hotel was used as railroad storage. By the time the Tacoma School District bought it in 1904, the building had been partially dismantled, having sustained heavy fire damage in 1898. Tacoma High School opened in 1906, was renamed in 1913, and has since been renovated several times. In 1999, Stadium High School served as the setting for 10 Things I Hate About You. Its Stadium Bowl, also seen in the film, opened in 1910 with seating for 32,000 and breathtaking views of Commencement Bay. Presidents Theodore Roosevelt, Woodrow Wilson, and Warren G. Harding gave speeches there. John Phillip Sousa and Louis Armstrong performed there. And WSU’s football team played there in 1917 against a team from Fort Lewis, 1941 against Texas A&M, and 1948 against Penn State. 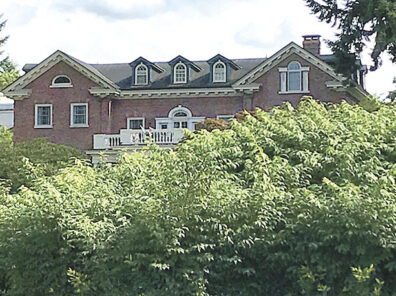 This three-story, red-brick, Georgian Revival mansion, designed by the Tacoma-based firm of Russell & Babcock, was completed with 19 rooms in 1909. Governor Marion E. Hay, his wife, Lizzie, and their five children were the first inhabitants. The mansion continues to serve as the state’s executive residence. A 1975 renovation added about 4,000 square feet to the back of the building. Since then, the home has only seen slight alterations. 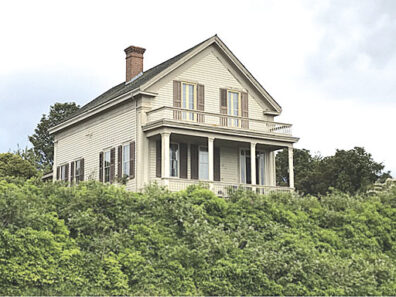 Washington’s smallest state park encompasses a half-acre atop a bluff overlooking Port Townsend Bay. The heart of the property is a simple, two-story, Greek Revival home built in 1868 by one of Port Townsend’s early merchants.

David C. H. “The Baron” Rothschild opened his downtown mercantile in 1858, living with his wife, Dorette, and their first three children above the business. Their last two children, Emilie and Eugene, were born in the eight-room uptown house, which includes a formal dining room, parlor, sewing room, and children’s playroom. Emilie, Port Townsend’s first librarian, lived there until her death in 1954. Eugene, who had long since moved to Seattle, deeded the property to the state five years later.

The Rothschild House Museum opened to the public in 1962, giving guests a glimpse into what life was like for a prominent family in Washington’s Victorian seaport in the second half of the nineteenth century. 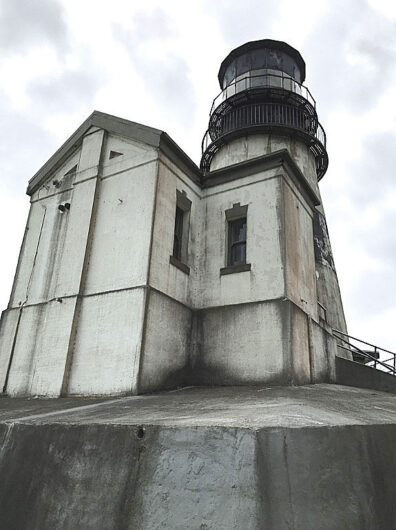 Washington’s oldest operating lighthouse stands at the mouth of the Columbia River, the most dangerous entrance to a commercial waterway in the world. Since the late 1700s, more than 2,000 vessels have wrecked in the Columbia Bar’s shifting sands, high seas, and heavy winds, including the Oriole, which, in 1853, was carrying building materials to erect a lighthouse to help other ships escape the same fate. Construction finally got underway after another supply ship arrived the following year. The Cape Disappointment Lighthouse was first lighted October 15, 1856. It stands 53 feet tall and tapers from a diameter of just over 14 feet to 10-and-a-half feet at the lantern room. Its distinctive black horizontal band was added in 1930. The light was automated in 1973. 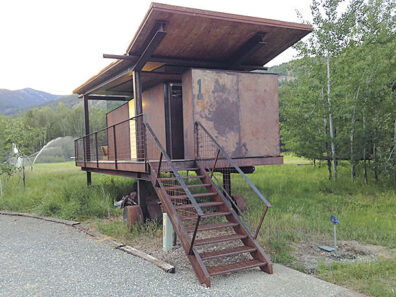 Situated on the eastern edge of the North Cascades, this pack of six, two-hundred-square-foot, contemporary cabins offers an elevated Washington state-style camping experience. Their award-winning design features modular furniture and hardy, low-maintenance materials. The steel, glass, and wood structures, created by Tom Kundig and completed in 2007, stand three feet above the ground and are topped with butterfly roofs. Sliding glass doors and wraparound decks give campers spectacular views of the mountains, meadow, and trees. Set close to nature, the industrial-looking, minimalist huts are outfitted with wood-burning fireplaces, Wi-Fi, and microwaves, but no bathrooms. 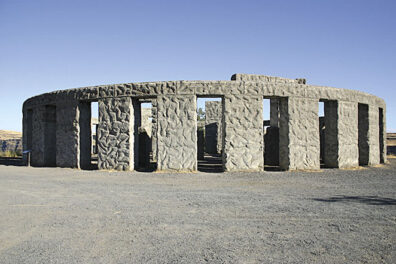 This concrete replica of England’s famous Neolithic structure honors Klickitat County’s World War I dead. Dedicated July 4, 1918, it’s likely the oldest full-scale Stonehenge replica in the world. The Stonehenge Memorial stands on 5,300 acres purchased by affluent industrialist Sam Hill in 1907 with the dream of creating a Quaker farming community along the Columbia River. The remote location and lack of irrigation ultimately caused that project to fail. And, in 1914, work began on what was to be his hilltop Beaux Arts mansion; instead, Maryhill Museum of Art opened in 1940. The memorial, completed and re-dedicated in 1929, stands 16 feet tall and remembers 14 local men who lost their lives in the “war to end all wars.” 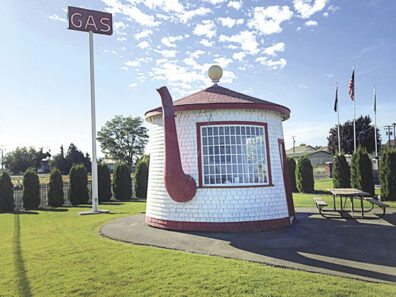 This teapot-shaped gas station⁠—short, stout, handle, spout⁠—originally sat along the highway between Zillah and Granger. Today, the roadside attraction serves as Zillah’s visitor center and reminder of a hundred-year-old scandal.

In 1921, President Warren G. Harding transferred control of three oil fields, intended as emergency naval fuel supplies, from the US Navy to the US Department of Interior. Interior Secretary Albert Fall then leased the reserves to two oil companies at low rates without competitive bidding. An investigation found Fall received $400,000 in bribes, and he became the first to be convicted of committing a felony while holding a Cabinet post.

One reserve was at Teapot Dome, Wyoming, and the incident became known as the Teapot Dome Scandal. It inspired Jack Ainsworth, whose father had a general store in the Yakima Valley, to install a kettle-shaped gas station beside the mercantile. The younger Ainsworth designed and built the structure in 1922, dubbing it “Teapot Dome.” The circular, wood-shingled edifice stands 14 feet in diameter with 10-foot ceilings, a decorative sheet-metal handle, and concrete spout that functioned as a stove pipe. 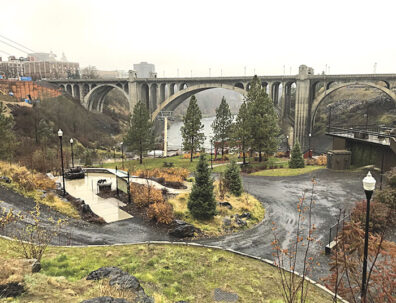 When it was completed in 1911, the Monroe Street Bridge was the longest self-supporting arch in America and the third largest in the world. It replaced a steel bridge, which had replaced a short-lived wooden bridge lost to fire. City engineers designed the structure, and Spokane architects Kirtland Cutter and Karl Malmgren designed its four pedestrian pavilions adorned with life-size, bas-relief, concrete bison skulls. After a two-and-a-half-year, $18 million restoration led by the engineering and construction management firm of David Evans and Associates, the bridge⁠—a key link between downtown and the north side of the city⁠—reopened in 2005. 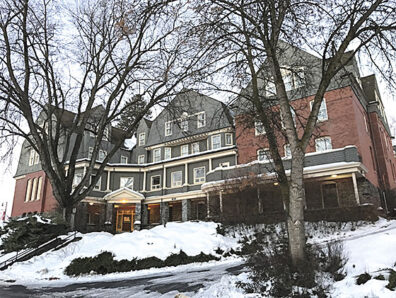 WSU’s first all-women’s dormitory, named for former Washington territorial governor Isaac Stevens and completed in 1896, is WSU’s oldest residence hall and second-oldest surviving building. It has been in continuous use since its completion, save for a year-long closure for rehabilitation in 1958.

During the college’s formative years, the hall served as a social center, hosting receptions, readings, dinners, dances, and teas.

Map of Washington’s Classic Buildings (SAH Archipedia, with essays by Gruen and Bauman)