First, you have to find them.

Grocery stores and farmers markets charge a pretty penny for these yolk-yellow beauties. And that’s why many mushroom lovers take matters into their own hands, heading into the autumn forest in search of culinary gold. The hunt—even though it often involves back-breaking bending over and trekking up inclines off beaten paths—is the fun part, second only to eating the mild, earthy mushrooms.

Pacific golden chanterelles (Cantharellus formosus)—flavorful, sought-after, a hallmark of fall—are indeed a woodland treasure. Foragers compare finding the delicacy in the duff of the forest floor to the thrill of Easter egg-hunting as children. One of the things that makes them so special is the fact they can’t be commercially grown. Another thing is their predictability.

“Something that’s amazing about chanterelles is they grow in the exact spot every year,” says Michael Neff, director of Washington State University’s molecular plant sciences graduate program, assistant chair of the Department of  Crop and Soil Sciences, and longtime mushroom hunter. “They really are predictable to the point of, say, within two feet of a particular stump.”

Because of this, seasoned mushroom hunters can be extremely secretive about their chanterelle spots.

“I don’t even know where my favorite spot is,” Neff jokes. “I blindfold myself, and then my car just drives me there.” To throw other chanterelle-seekers off his trail, he says, “I always park a little bit away from where I’m actually doing my hunting.”

Chanterelles—Pacific golden as well as related species that also grow in the Pacific Northwest such as the white chanterelle (Cantharellus subalbidus), yellowfeet or winter chanterelle (Cantharellus tubaeformis), and black chanterelle (Craterellus cornucopioides)—hold a particular allure for Lori Carris, a recently retired professor in WSU’s Department of Plant Pathology. “You have to put a lot of time into finding them,” she says. “When you do, it’s just thrilling.”

Common throughout Europe and North America as well as parts of Australia, Africa, and Asia, chanterelles like shady, conifer-covered places. They’re mycorrhizal, meaning their underground networks of mycelia enjoy a symbiotic relationship with host-specific tree roots, particularly those of Douglas fir, spruce, and hemlock. “Even though we have the ability to grow mycelia in culture,” Carris says, “we haven’t been able to get them to fruit without a tree. You can only find chanterelles in the wild.”

While brightly colored, chanterelles can be difficult to spot under a canopy of mixed conifer trees and a blanket of fir and pine needles. They’re easily mistaken for autumn-hued leaves. Identify them by their playful shape, often compared to a funnel or trumpet, as well as their false gills and the forked ridges running down their thick stems. Their caps are wavy and irregular, with ruffled edges like fluted pastry crusts.

Popularized in France in the 1700s, chanterelles—low in calories and a good source of vitamin D as well as minerals such as copper, iron, potassium, and manganese—were served in haute cuisine to nobility. They remain a favorite in many European nations such as Poland, Lithuania, Ukraine, and Czech Republic, where mushroom-picking is a long-standing cultural tradition.

“Their flavor always makes me think of being in the woods,” says Carris, a past executive vice president of the Mycological Society of America who appeared in the 2019 documentary film  Fantastic Fungi,  directed by Louie Schwartzberg and narrated by Brie Larson. “When they cook, their scent is more fruity—one species smells like apricots—but the taste, to me, is just reminiscent of the forest.”

Chefs use chanterelles in creamy, seasonal dishes, such as risotto, pasta, and pilaf. They pair particularly well with thyme, shallots, and saffron. And they’re easy to prepare. Roast or sauté them with butter, olive oil, and a splash of wine, then enjoy. Or, save them for later. “The nice thing about chanterelles is you can freeze them,” Carris says. “You can enjoy them all year long.”

Neff uses his first picks of the season atop steak. Leftovers go into a goat-cheese omelet the next morning. The secret ingredient in his sauté: a little vermouth or freshly squeezed lemon juice—or both. “It’s just great to eat with a loaf of bread,” says Neff, who also puts chanterelles on homemade pizza and into spaghetti sauce. “I just love eating them.”

He loves them so much that, in his contract negotiations, “I actually stipulated that the search committee chair would show me his secret fishing hole and his secret mushroom spot,” Neff says. “He took me some places, but not his secret chanterelle spot.” Neff eventually stumbled upon it himself. Of course, he won’t say where it is.

Jim Freed recommends looking for the edible gold “in younger, healthier forests, typically second-growth, with trees 10 to 12 feet in diameter.” The retired special forest products specialist for WSU Extension taught classes for mycological societies on the west side for decades. He encourages foragers to tread carefully and harvest gently, cutting mushrooms at their base, rather than yanking them out of the ground, “so as not to disturb the mycelia.”

He also recommends keeping an eye on the weather. “In drier conditions, they don’t come up as much,” says Freed, who’s seen chanterelles selling anywhere from $10 to $17, even $28, per pound. “It’s really crucial what happens in late July to middle of August. If temperatures stay nice and warm, above freezing at night, and there’s good soil moisture of maybe 2 inches of rainfall over the month, you’ll see lots of chanterelles. Their prime is middle of September to Halloween unless you get a frost. We’ve had three good years in a row now.”

He’s hoping for another one. 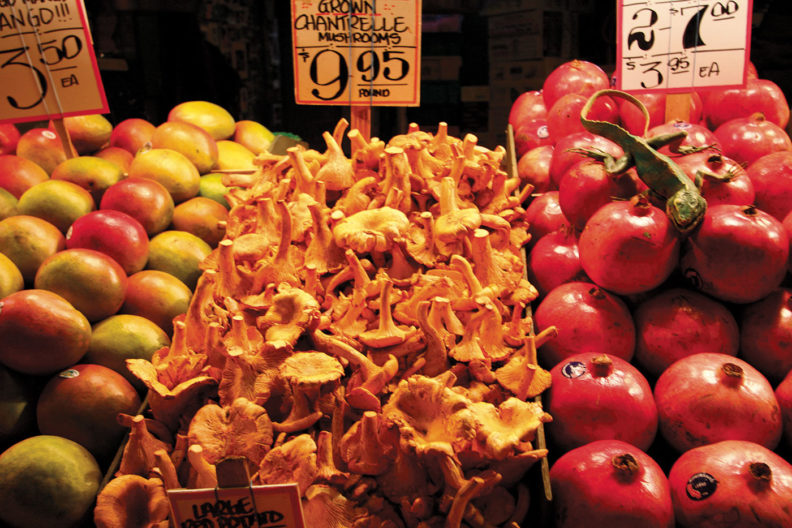