Robert Slack ’71 DVM thoroughly enjoyed his early days as a veterinarian. An adventurous man, he chose to begin his career in Australia and, later, traveled back to the United States on a camping trip through Iran, Turkey, India, and Pakistan. He even stopped off to run with the bulls in Pamplona.

Once settled into practice stateside, however, Slack was caught off-guard when he found himself struggling to help clients with euthanasia and end-of-life issues. Though veterinary colleges today teach courses on grief and grief counseling, in 1971 neither they nor medical schools addressed the topic in much depth.

“At that time, it was all about what you were going to do for other people,” says Slack. “When I graduated, I was totally channeled toward helping others and their pets. I think that’s one of the reasons we have so much trouble with substance abuse in our profession,” he says. “We’re good caretakers but we’re not good at self-care.”

Veterinarians enter their careers with a strong desire to help animals and advance medicine, never imagining the intense challenges of day-to-day practice could leave them feeling trapped and suicidal. Reported suicide rates for veterinarians are 3.5 times the national average, a dismal distinction the Centers for Disease Control and Prevention attributes to occupational stress, depression, burn out, and substance abuse.

Slack says he never thought about his own grief in the beginning. During euthanasia, veterinarians are focused on taking care of the client’s grief but they, too, often grieve the loss of an animal they’ve treated for many years.

“If you don’t deal with your own grief, it comes back in difficult ways like depression and substance abuse,” he says.

Recognizing his need to address these issues, Slack took a break from veterinary practice for a few years to pursue a degree in counseling.

“Actually, I was the one who needed counseling, but being a perfectionist, I went in the back door and got a better understanding of the problems I was having,” he says. “In my case, I had become an alcoholic, but during my training, I confronted it and have been sober for 30 years now.

“Later, when I returned to vet practice in Spokane, I was better prepared to deal with grief in a way that I had self-care—and did not become enmeshed in the client’s issues. So, I was a better vet and better able to help with their loss.”

Slack was also soon hired to facilitate small groups for the Washington Physicians Health Program (WPHP), an independent, nonprofit organization which assists doctors, veterinarians, dentists, and physicians assistants who struggle with substance use disorders, mental health problems, or both.

It’s no secret that medical professions, with their rigorous academic requirements, tend to select for perfectionism—a trait that is often associated with conditions such as depression and anxiety. Slack says the very characteristics that make good health professionals also put them at risk.

“I think these things are underdiagnosed in veterinarians, unfortunately, as they can isolate so easily and many suffer in silence. They’re trained to be the caretaker—‘I can’t be in need. I solve other people’s needs. I can’t reach out for help.’ But once they do, it’s like, ‘Oh! I’m not the only one?’”

Now retired after 25 years of successful veterinary practice in eastern Washington, Slack remains active in the local community where he continues to hold WPHP groups one night a week. In 2017, he published a book, Tails, which celebrates the human-animal bond as seen through the eyes of his clients. He shares those insights—along with tales of his own dogs, Shilo and Bailee—in public presentations at humane societies, dog clubs, pet groups, and churches. 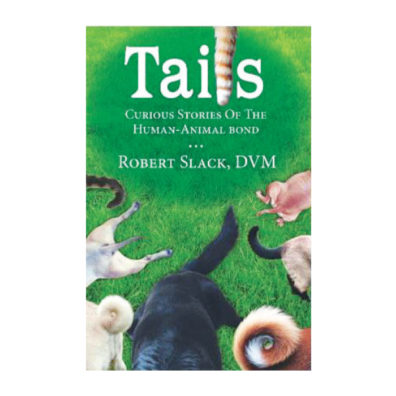 Through the human-animal bond, Slack says our pets also teach us how to live in the moment, and since their biological clock runs five or six times faster than our own, help us learn about endings—“this thing called death, suffering, and dying.

“Scientifically, we can talk about neurotransmitters, the brain, and hormones but I think the human-animal bond is truly a great mystery. As a doctor, we’re always trying to figure things out, but this reciprocity, this shared relationship with a pet—it’s something you just have to experience.”

If you or someone you love is a health professional suffering with mental health or substance use issues, WPHP can help: 800-552-7236 or wphp.org.

For more information, Slack can be contacted at: slackdoc@me.com