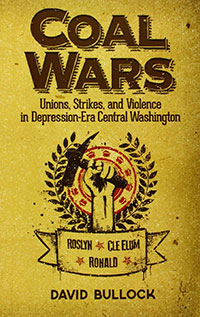 There was a time, it’s been recalled, when each home in Roslyn had three pictures on its wall: of Jesus, FDR, and John L. Lewis, the powerful head of the United Mine Workers of America, or UMW. But labor conflicts in the coal-mining town during the 1930s would severely strain and replace the loyalties reflected by the latter two. In Coal Wars, David Bullock recounts the bitter struggle in 1933-34 between the UMW and the more radical Western Miners Union in the mining communities of Roslyn, Cle Elum, and Ronald.

Coal production in the area hit a high of 1.8 million tons in 1920, the year Herman and Anna Swanson moved to Roslyn. Swedish immigrants, the Swansons were the author’s grandparents.

“Washington was the second-largest coal-producing state in the West during the first third of the century,” writes Bullock. “And the Roslyn coal field was the largest single coal-producing region in the state, generating 40 to 50 percent of the state’s annual coal yield during that era.” The other coal regions lay on the west side of the Cascades.

Following the establishment of the region’s first mine in 1886 by the Northern Pacific Railroad, the Northwestern Improvement Company eventually established nine major shafts in the Roslyn-Cle Elum area. Roslyn’s population peaked at nearly 4,000 at the height of production, but by the early 1930s, its population and economy had steadily declined.

A shrinking market for coal and the shadow of the Great Depression led the Washington industry to reflect the struggles of the larger coal-producing area back East. The major industrial component of the New Deal, the National Recovery Administration, established protections for workers to join unions of their own choosing. A result of the legislation was to accelerate the number of work stoppages nationwide, which doubled from 841 in 1932 to 1,695 in 1933.

Central Washington miners actively pushed for two major things, banning electric coal-cutting machines in gaseous mines and a six-day workweek. Miners believed the electric machines could spark gas explosions. An underlying objection, though, and understandably so, concerned the replacement of men with the more efficient machines.

Although the Washington legislature actually passed a law forbidding the machines in the mines, it was soon overturned. This disappointment, along with no progress toward shorter hours and corresponding cuts in wages, exacerbated the miners’ unrest. Disillusion with the effectiveness of the UMW led to the eventual formation of the more radical Western Miners Union of America.

However, because many, including Herman Swanson, remained loyal to the UMW, the stage was set for a new type of labor confrontation, which pitted miner against miner as well as against the company.

Animosity erupted with the shooting death of a Cle Elum miner in 1933. Sporadic violence continued up to a vote by WMU miners to strike against the company. Picket lines formed at each of the mines, and the situation quickly became ugly. Even though all of the NWI mines opened, only a third of their usual workers reported.

As picketers became more volatile and violent, the state police used tear gas to disperse the crowds. The result of the dispersal, however, was to create more disturbances throughout the community.

Although the WMU’s failure to shut down operations and the arrests of many instigators led to its dissolution in the summer of 1934, the damage to the community was irreparable: “The actions taken on the picket lines and in neighborhoods throughout the upper county—the name-calling, the physical abuse, the threats and taunts—had taken an intense emotional toll on the community as well.”

Not only does Bullock’s history provide a fine addition to our understanding of Washington’s culture and history, it offers a personal and local example of the national strife of the early 1930s. Using his grandfather as a narrative participant, though awkward at times, by and large results in a very readable, even gripping, labor history.