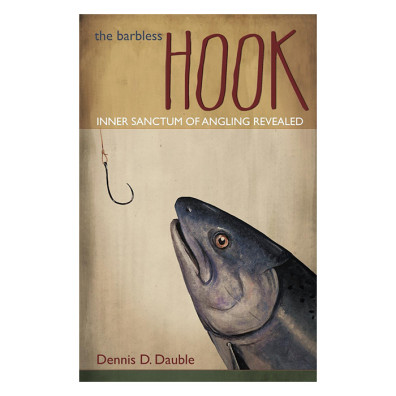 In the tradition of Patrick McManus ’56, ’59, Dennis Dauble ventures into that conjoined alternate universe of outdoor sport and humor, the difference between the two being that Dauble tends to catch more fish. Perhaps that is because Dauble was a fish biologist and McManus was an English major.

Regardless, Dauble sets the tone for the book with an epigram by yet another piscatory alum, Ray Troll ’81: “Fish worship. Is it wrong?” Midway through The Barbless Hook, Dauble directly addresses the relationship between science and religion within the context of fishing. Astounded when his fishing buddy Leroy appeals in desperation to the great god Chinook, Dauble expounds on the mysteries of fishing and other unexplainable things.

Throughout this book of engaging and quirky essays, Dauble examines similarly profound topics such as the moral ambiguity of trespassing in search of a good fishing spot, Jacques Pepin’s technique for making fish sausages, and the hazards and pleasures of being the odd man out.

Dauble, who teaches fish biology and ecology at WSU Tri-Cities, was formerly a fisheries biologist with Pacific Northwest National Laboratory and previously published Fishes of the Columbia Basin: A Guide to Their Natural History and Identification.