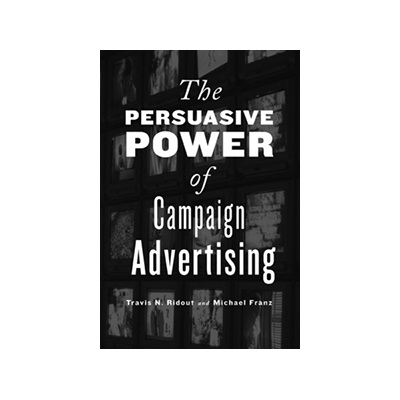 Another major election year has arrived and with it, the inevitable onslaught of political advertisements. Do those ads influence the way we vote, or do they just provide the background noise and distraction that build cynicism toward the modern democratic process?

Ridout and Franz examine several aspects of campaign ads to determine their effects: context of the political race (general or primary, incumbent or challenger), tone or emotional appeal of the ad, characteristics of an ad’s viewers, and influence of news media reporting or Internet buzz about ads.

The results of their work show that indeed, political advertising does influence the votes people cast, and how much depends on the circumstances of the race. For example, they found television ads had a more powerful impact in open races and for challengers against incumbents.

One surprising finding shows that even political partisans can be affected by the advertising. Ridout and Franz write, “The larger message we draw from this is that political advertising is broadly influential in American politics and for a wide segment of the voting public.”

The Persuasive Power of Campaign Advertising contributes significant insights into campaign advertising for students of political science, journalists, and anyone involved or interested in political campaigns. As a major source of information on candidates, television advertising has a strong effect on American democracy, and this work gives a basis for understanding how it works.