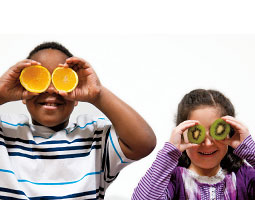 Power and other researchers have found that the ways parents interact with children during mealtimes and snacks—their food parenting styles—can affect the risk of obesity for the children.

The significant impact of family eating styles and children’s ability to self-regulate are the keys to a new five-year study that aims to develop a family-based childhood obesity prevention program. Funded by a $4 million U.S. Department of Agriculture grant, Power and colleagues from the Baylor College of Medicine, University of Colorado Medical School, North Carolina State University, WSU Vancouver, and WSU Extension will pilot and test the program among low-income, Latino and African American families with preschool children in Yakima, Tacoma, and Houston.

The research and outreach by Power and his colleagues come at a crucial point in the obesity health crisis. The number of obese children in the United States has almost tripled in the last thirty years, according to the Centers for Disease Control and Prevention, which defines obesity as having a body mass index in the 95th percentile. In 2009, one of seven low-income, preschool-aged children was obese.

According to the CDC, Latino and African American children are significantly more likely to be obese, leading to higher incidences of Type 2 diabetes, high blood pressure, high cholesterol, asthma and other respiratory problems, and social and psychological problems.

Power describes three primary feeding styles in families, two of which can lead to a risk of overweight children. “With the authoritarian style, the child is focusing on external cues on what they should eat or how much they should eat, and paying less attention to whether they are full or not,” says Power. “They want to please their parents, so they eat as much as they’re given as opposed to stopping when they’re full.”

Parents using the indulgent style let children eat what and how much they want, whether the food is healthy or not. This style is most likely to lead to obese children in low-income populations. The indulgent parents sometimes use food as a reward, notes Power. “The idea is that feeding is like love and showing your affection toward your children is feeding them.”

Parents using the third food parenting style give healthy foods to children, but let the children choose how much they want to eat based on their own signals of being hungry or full. Labeled the responsive style, research shows a lower chance of obesity in those children.

For the first year of the grant, Power and the other researchers will assess videos from their previous studies, in which they observed 143 Latino and African American Houston-area parents interacting with their kids at dinnertime, and analyze their feeding styles. The research team will then run focus groups, followed by a six-week program with families in Texas and Washington who were randomly selected to be in either the food parenting or a control group on food safety.

For the children, the program will teach self-regulation strategies and encourage them to try new foods. Parents will look at their food parenting and strategies to let the child decide how much to eat. After the program, the researchers will follow up with the families to see the impacts on eating habits and rates of obesity, controlling for specific diet and other factors.

Power anticipates some barriers. “It will be a real challenge for us, because in these low-income families, giving a child something good to eat is often one of the few things they can do for the child. They can’t buy really nice clothes, lots of toys, or technology, but you can buy them a snack or a sweet,” he says. A lot of the families live in “food deserts,” where stores don’t carry many affordable, healthy, low-calorie foods like fruits and vegetables, usually in areas with high poverty. And often parents’ work schedules make it difficult to prepare family meals or provide healthy foods.

Despite these issues, Power points out that the program will work on long-term skills for parents and their preschool children to sustain changes in food parenting and eating patterns.

“You have to do this in a way that makes sense to the parents and leads to results with their kids,” says Power. “We’re hoping that by providing new strategies for them, it might make dinnertime a more pleasant experience for them and they might be more likely to incorporate them into their daily lives.”

Many of these techniques can be used by any parents with children, he says. “Avoid the power struggle, provide them with lots of opportunities to eat the right food, and leave it up to them how much they eat or even if they eat it at all.”

Smart Start: Guiding Your Children to a Lifetime of Healthy Eating from the U.S. Cooperative Extension System