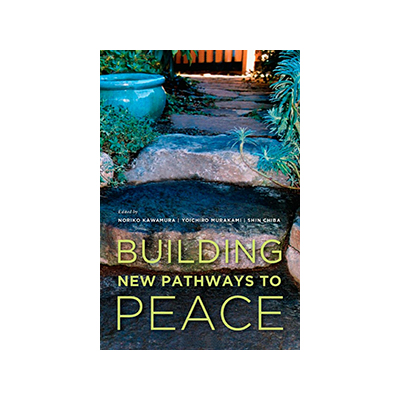 The idea of “peace” in our complex and conflicted world sometimes seems out of reach or even antiquated. The authors in this collection recognize these realities and make a concerted effort to build a new theory of peace studies.

Noriko Kawamura, a WSU assistant professor of history, co-edited the volume, which includes contributions from a number of Washington State faculty along with their colleagues at International Christian University in Tokyo.

A five-year collaboration between the two universities crossed several academic disciplines, and Building New Pathways to Peace is one of the fruits of that effort to embrace the intricacies of modern peace studies.

The title of the book uses “pathways” because, as the editors point out, achieving peace is a process and journey that can take multiple routes. Whether you call it shalom, justice, kyosei, or tolerance, human security and safety have moved beyond traditional national security concerns and the simple dichotomy of “peace” and “war.” The depth of research from WSU and ICU deftly tackles many facets of peace and security.

From WSU’s political science department, Martha Cottam uses the tools of political psychology as possible remedies to impediments in human security, and Otwin Marenin reviews past peacebuilding efforts to learn lessons for moving from peace theory to practical policy.

WSU sociologist Gregory Hooks delves into the past problems in states that led to conflict and explores alternatives. Raymond Sun, associate history professor at WSU, discusses memory of WWII in Germany, while Kawamura writes about Japanese and U.S. memories of the Pacific War and how to transcend them.