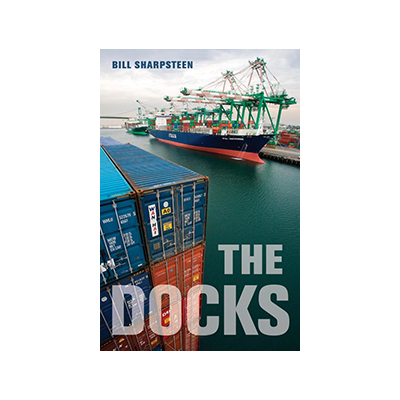 In my sailing days on Puget Sound, I got used to watching for the fast-moving container ships that could overtake my little boat in a matter of minutes. One day, I found their schedules on the Internet and saw the outline of a huge, economically powerful engine tying together goods from around the world.

In The Docks, Bill Sharpsteen ’80 shows us this world by peering into the Port of Los Angeles. It’s as good a place as any to illustrate the characters and conflicts that arise when you jam an inordinate share of a nation’s waterborne cargo through a single, dangerous, lucrative hole in a coast.

“It’s so big, so vital,” writes Sharpsteen, “that if it suddenly shut down, which has happened, our entire country would buckle at its knees, which has also happened.”

Sharpsteen spent about a decade pondering what turned out to be a bewilderingly large operation. One-quarter of a trillion dollars in global trade can go through the port in a year. With the nearby Port of Long Beach, it employs half a million people.

Sharpsteen, in effect, interviewed the various blind men holding on to various parts of the elephant, from rank-and-file longshoremen to the port’s guarded and seemingly scripted executive director. The technique deprives the book of an overarching narrative, but it does take us into a lot of places we might never go.

Here’s a pilot parking a 698-foot container ship; there’s a tug captain doing the same with 4,800 horsepower and an 8-inch towline. But on shore things get messy as the forces of capital, collective bargaining, public health, global economics, and women’s rights collide.

We see Noel Park, a resident of nearby San Pedro, struggle for years to improve the “diesel death zone,” as ships put out the exhaust of 1,200 cars, from a fuel with 1,000 times the sulfur as that used by a modern truck. His efforts are repeatedly stymied in a pattern of battles and defeats that will be familiar to many an activist. At last, he quits.

The odds also seem stacked against Gretchen Williams, one of the first female longshoremen. Men leer at her as they unload new Toyotas. When she tells a supervisor that men have tried to sexually assault her, he says, “Don’t worry about it, little lady.”

At last a private law firm takes up her cause with the complaints of half a dozen other women, and a federal judge imposes hiring quotas for women on the union local. Williams calls the case “the most successful affirmative action program in the country. Ever.” But in an ironic footnote, the job openings her fight created often go to the wives, girlfriends, and mistresses of some of the men most opposed to hiring women.

Sharpsteen fought his own battles to get this book done. It sometimes took him years to get interviews and documents.

“Everyone, it seems, has some secret they’d rather keep to themselves, while perhaps ignoring the biggest one—that their industry has become so intertwined with the U.S. economy that all it takes is a small fire at a crane or a single labor dispute to ripple across the country, potentially costing the nation billions.”

Like many of the people he met along the way, Sharpsteen persisted. His efforts have paid off handsomely.