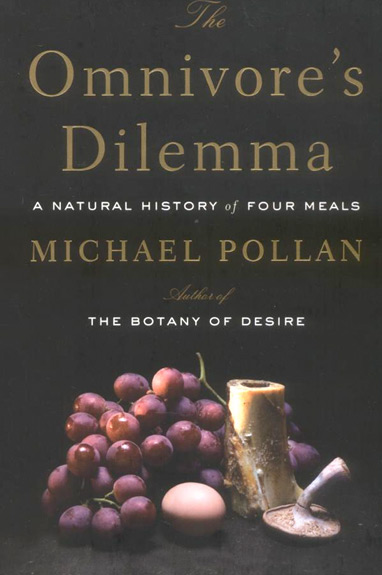 Michael Pollan has been a leading voice in the re-evaluation of how we eat and farm. The author of Omnivore’s Dilemma, the book selected for this year’s Common Reading, Pollan visited campus in January to talk with the students who had been discussing his book and present a lecture on “The Sun-Food Agenda.” Washington State Magazine’s Tim Steury interviewed him by phone prior to his visit. The following is an edited version of their conversation:

WSM: There’s been a real sea change in how we think about food in this country. I wonder if you could address what laid the groundwork for your ideas being so widely discussed. What was the tipping point?

Pollan: There have been a few things that happened:

Omnivore’s Dilemma happened to meet a culture ready to hear a discussion of where our food comes from. There were certain things that happened to make people very curious and very nervous. I think Mad Cow Disease, even though it never became a tremendous problem in this country, was a real wake-up call for people, that food was being produced in ways they hadn’t been told and they were very troubled by, the idea we were feeding cows to cows when we produced meat.

The food safety problems in the early 90s, Jack in the Box and other E. coli outbreaks. I think the animal rights movement, too, had shown people how some food is produced. Fast Food Nation, the book, I think was really important. And then of course you have the obesity epidemic and diabetes epidemic getting people’s attention. I think a lot of interest in the food system is driven by these public health challenges we face. Those were really coming to the fore in the early days of this decade. It was clear that there was something wrong with the American diet.

WSM: Your ideas have been well received. Have you seen any real change in industry in response?

Pollan: Yes, there has been some change. A lot of it is public relations. But some of it is sincere effort to change. You have companies trying to simplify some of their food in order to make it healthier, and there are initiatives. Some of it is insincere. When you add one gram of fiber to Fruit Loops and then start boasting about it as health food, it’s not exactly what we’re talking about.

WSM: Looking at the same thing from more of a cultural side, we’ve seen a lot of growth in farmer’s markets and related interest in food. But without a real food culture in this country, is that momentum sustainable?

Pollan: Well, the real question is, are we in the process of building that food culture? That’s what would make it sustainable. There are some signs that we are. We’re getting interested in quality ingredients. There is much more interest in fine food and cooking and where food comes from. All this could turn into a healthy and enduring food culture. Or not. It’s hard to tell.

At the same time as you have all these alternatives springing up, you have cooking still in decline, although I think it has made a bit of a comeback in the last year with the recession. You hear this from people who sell kitchen equipment and people who sell bulk food and ingredients.

In a recession, people stay home and cook more, and that’s a very positive thing. It’s too soon to say whether we’re talking about a fad here or any enduring change, and I wouldn’t want to venture any predictions.

WSM: John Mackey (founder of Whole Foods) has criticized what he calls your “exaltation of the little.” That does perhaps reflect the major criticism of your work.

Pollan: Well, I think we have to do it on every scale we can. There’s nothing wrong with working on several scales at the same time. It’s not an all or nothing proposition. I don’t think we’re going to go back to a hundred percent local food economy. We haven’t really had that for many hundreds of years. We’ve lost a lot of the agricultural land near cities you need to make that happen.

That’s not to say you can’t work to make 20, 30, 40 percent regionally a worthwhile goal. Many good things would come of that, for the landscape, the farmers, the public health.

We tend to think in black and white in this country, it’s all meat or all vegetarian, it’s all local or all global, and that’s not the real world. Can organic feed the world? I don’t honestly know if organic can feed the world. I think we need to try and get as close as we can, because we don’t have the fossil fuel to do it any other way.

One of the ways people battle a message like mine is to suggest that—this is the message the Farm Bureau tells farmers—that writers like me want to destroy farming as we know it and turn back the clock. These are cartoon charges.

I see what we’re doing is building new markets for farmers, new options for consumers, and I don’t see the mainstream supermarket disappearing anytime soon.

WSM: A couple of what-if questions. If Barack Obama were to appoint you the head of the FDA, what would be your first move?

Pollan: (Laughs) Oh man. He’s too smart to do that. But the first thing I would do would be ban important human antibiotics in livestock production. I think that is a real threat. I think the feedlot system in this country is a disaster waiting to happen. We have already seen the evolution of swine flu in hog confinement operations in Mexico, and staph is coming out of hog confinement operations. We’ve created a really dangerous incubator for lethal diseases. If the FDA were to say, look, these antibiotics are too important to squander routinely on animals. I’m not talking about treating animals, I’m talking about putting them in food to promote growth and permit greater levels of concentration. If we did that, much would change in that system. Meat might become a little more expensive, that is true. But as it is, we’re eating too much for our own good or the planet’s own good. So I think that’s something important the FDA could use.

I would push for more transparency in labeling.

I would prohibit health claims on food. When the least healthy foods in supermarkets have the loudest health claims, there’s something wrong with that picture.

WSM: As the head of the USDA?

I’d take a good hard look at all our farm policies. I’d figure out a way to revamp the commodity subsidy programs. I’d keep the amount of support for farms exactly the same. I would not cut them. But I would ask farmers to do something else in exchange for their subsidy checks for corn, soy, wheat, cotton. I would enlist them in helping to solve two of our most important problems: the public health crisis around food, obesity and diabetes, and climate change. Farmers are very well positioned to help solve those problems. In the sam
e way they answered the challenge of producing as much food as possible that we set for them post-World War II, I’d say now the challenge is different, it’s not the quantity of food that’s so important as quality of food, and doing it in a way that doesn’t use so much fossil fuel.

I would revamp the commodity programs top to bottom—in a way, by the way, that would help farmers, not hurt them.

WSM: We have 3,500 young readers here on campus discussing Omnivore’s Dilemma and related ideas. What’s the main distilled message you want to convey to them Wednesday evening?

Pollan: That food is really important. Debating how we should grow food, how we consume it is vitally important too, and we have let this slide for too many years. Food was cheap, and nobody had to think about it. And by doing so we allowed two very serious problems to grow. One was a public health problem, and the other is an environment problem. We need to address them both. There are some very exciting ways we can. Food production is potentially the most sustainable sector of our economy, because it relies on solar energy, on photosynthesis. So there are opportunities to push food back onto its solar footing and off of fossil fuel. That would accomplish a lot of benefits at once.

So I’m very optimistic. I think farmers hold the key to solving our problems, and we just have to give them the right set of incentives. When I say we, I mean consumers and government. We’re just at the beginning of this debate over the future of food and farming, and it will be decided at campuses like this one.