Reporters, college administrators, and even scientists themselves often talk about basic and applied research as if they are the two ends of a spectrum, and that most research can be described as being either “purely basic,” with no practical end in view, or “applied,” with only practical ends in view (and no interest in understanding fundamental processes of nature). Scientists whose work combines the two get placed somewhere along the line between them, but like placing a pivot under a teeter-totter, the question arises, which side is heavier? Does her work tilt more toward the applied side or the basic?

Such questions, and the whole idea of the basic-applied spectrum, are analyzed and demolished in the book Pasteur’s Quadrant, by Donald E. Stokes. After detailing how the spectrum idea arose and the ways in which it does not fit the actual practice of science today, he presents an alternative: a box divided into four quadrants that represent an emphasis on different aspects of research. The 2-axis grid acknowledges that basic and applied work do not have to oppose each other, but can blend and support each other.

On the grid, the vertical axis shows whether the work involves a “quest for fundamental understanding” and the horizontal axis shows whether the work involves “considerations of use.” According to Stokes, any scientist can be placed in the grid based on the relative importance of the two concerns in his work. He puts theoretical physicist Niels Bohr high and way to the left in the upper left quadrant—as basic as can be. Thomas Edison, whose focus on practical inventions was so intense that he refused to follow up on results that would have led him to some fundamental discoveries had he pursued them, is low and way to the right in the bottom right quadrant—thoroughly applied.

Even the bottom left quadrant, which would seem unlikely to contain anything at all (no interest in fundamental principles or practical invention), has some occupants: those whose work fills in the details of already well-understood and useful knowledge.

Stokes maintains that most scientists work in the upper right quadrant, motivated by both their curiosity about fundamental principles of nature and a desire to create or contribute to a useful product or process. He names this quadrant after Louis Pasteur, whose pioneering work in microbiology fed into and drew from his development of chemical processes for the brewing industry and safeguards against microbial diseases.

“As Pasteur’s scientific studies became progressively more fundamental, the problems he chose and the lines of inquiry he pursued became progressively more applied,” writes Stokes. “Many of his detailed lines of [basic] inquiry…are unintelligible apart from his applied goals. The mature Pasteur never did a study that was not applied, [even] as he laid out a whole new branch of science.”

Related: “Straight shot to a breakthrough?” 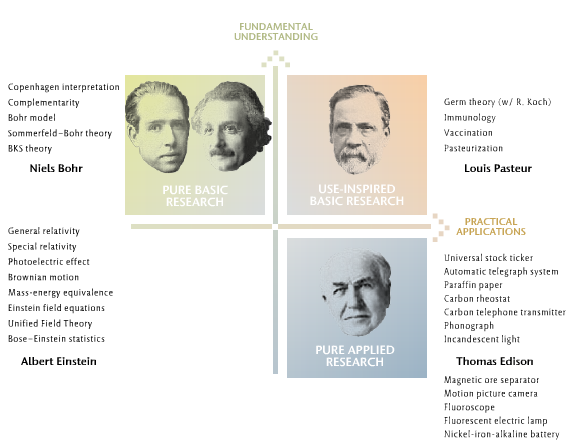