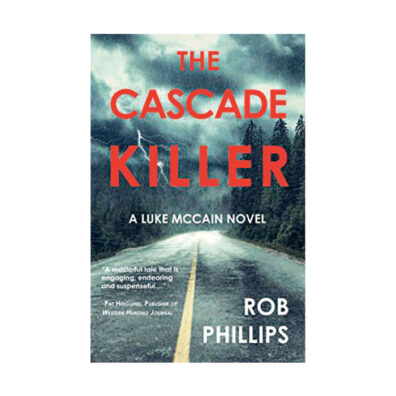 Jack, a yellow Labrador retriever, leads McCain and a crew of sheriff’s deputies to what’s left of a Native woman’s body. A second body is discovered a month and a half later. Soon after, another is found. Then, another. McCain is at the scene each time.

While a work of fiction, this timely and gripping narrative set largely in the wilds of Washington’s Cascade Mountains echoes recent real-life headlines publicizing the epidemic of missing or murdered Indigenous women. Along with the murder mystery, the fast-paced plot features plenty of action and intrigue⁠—a jailbreak, run-ins with poachers and wild animals, steak dinners with an attractive young FBI special agent, and glimpses into the killer’s mind.

Rob Phillips demonstrates his deep, first-hand knowledge of central Washington’s backcountry in this quick and engaging read. And his writing style is wholly approachable. He writes about what and where he knows⁠—from the Lower Naches and White Pass to Rimrock Lake and Cle Elum. In addition to lots of central Washington references, the avid outdoorsman includes plenty of jokes about the Oregon Ducks.

He’s racked up 30 years’ worth of newspaper columns focusing on the great outdoors. Phillips has been writing the Northwest Sportsman column for the Yakima Herald-Republic since 1991.

Readers who enjoy this page-turner are in luck; Phillips wrote two more Luke McCain novels in 2021 and another in 2022.