Global agriculture is in many ways indebted to scientists who tinker with a nondescript little plant called mouse-ear cress or Arabidopsis thaliana.

“The weed,” as it’s affectionately known among researchers, grows along roadsides or in the cracks of sidewalks where its small white flowers rise on stalks from a floret of rounded leaves. A part of the brassica family whose cousins include broccoli and cabbage, Arabidopsis is edible if you’re so inclined.

But the thing that makes Arabidopsis so important to scientists⁠—such that it warranted a 2019 trip to the moon aboard China’s Chang’e-4 lander⁠—is the plant’s extremely small genome of only 125 megabase pairs and five chromosomes. In 2000, that genome became the first in the plant kingdom to be completely sequenced.

Since then, Arabidopsis has become the world’s favorite model organism for studying plant biology, genetics, evolution, and much more. Its impact is so ubiquitous, in fact, that some call Arabidopsis the fruit fly of the plant world.

At Washington State University, Arabidopsis gives faculty and students in the Molecular Plant Sciences Program a vital platform to explore the fundamental life processes of valuable crops such as wheat, barley, potatoes, mint, and cannabis.

John Browse, WSU Regents Professor of biochemistry and molecular plant science, has been an integral part of the program since 1988. He first began working with Arabidopsis in 1983 when the tiny plant was just gaining notice as a versatile and easy-to-use experimental organism.

“Arabidopsis research started as early as the 1940s but really took off in the scientific community around 1975–1980,” he says. “The plant is extremely small so is easy to grow in controlled environments. It also has a very short life cycle and will produce seeds in only six to eight weeks’ time. So, for impatient scientists, it lets us progress through our experiments much faster than if we were studying another plant like corn, which you’re lucky to get one crop per year from.”

Browse was recently inducted into the National Academy of Sciences for his pioneering work in the field of plant biology. Specifically, he studies plant cell membranes and the lipid molecules they are composed of. His primary focus is on oilseed crops such as soy, canola, and sunflower that are often used for food, biofuels, and other bioproducts.

In 1994, Browse made a historic discovery that transformed the international food industry. Using his favorite “pet” line of Arabidopsis, he identified a gene that would make it possible to eliminate heart-damaging trans fats from many cooking oils and fats.

Trans fats, once a mainstay of margarine, baked goods, fried food, and even microwave popcorn, were eventually banned by the US Food and Drug Administration in 2018, though a few processed foods and snacks still contain them.

“The problem with most vegetable oils is they have a lot of polyunsaturated fatty acids that easily oxidize in the air and produce the off-flavors you get when it goes rancid,” says Browse.

“In order to stop that process, the food industry resorted to using partially hydrogenated oils, which produce the trans fats that have been shown to cause heart health problems.

“The gene we identified is the one that encodes the gateway enzyme to the synthesis of polyunsaturated fatty acids,” he says. “So it was possible to downregulate that gene and prevent the formation of polyunsaturates in the first place. Then we no longer had to worry about rancidity or resorting to partially hydrogenated oils.”

Today, Browse and his colleagues are investigating oilseed crops as a renewable resource for the production of plastics, polymers, and biofuels⁠—although they recently faced a small detour along the way.

Thanks to the pending demolition of Johnson Hall on the Pullman campus, Browse’s entire laboratory had to be packed up and moved across the street to the brand-new WSU Plant Sciences Building. There, protected by a key-code entry, he and other researchers enjoy state-of-the-art facilities and equipment.

Among those fellow researchers is Michael Neff, professor of crop biotechnology, who has been director of the Molecular Plant Sciences Program since 2009. This morning, wearing his signature Hawaiian shirt, he meets me at the building’s large glass doorway and cards me in.

“We are an interdisciplinary PhD program with about 40 faculty members from eight different university departments and four colleges,” Neff begins. “I like to think of our program as going all the way from the petri dish to the farm.”

Indeed, their doctoral students study topics ranging from fundamental plant biology, including the genes and proteins that control plant development, to real-world applications of that knowledge for crops and breeding programs. Neff says some students focus on bioinformatics, for example, while others tackle diseases of barley or cannabis. Quite a few still conduct research with that humble model organism Arabidopsis.

As we tour the quiet and spacious Plant Sciences Building, Neff points out a few highlights.

“On the first floor, we have the proteomics facility for researchers who are interested in specific plant proteins,” he says. “Some of the equipment can analyze secondary organic compounds, those unique proteins that make plants taste good, or be poisonous, repel or attract insects, aid in ripening, or make them good for food preservation or medicinal purposes.”

Down the hallway, painted a fitting shade of green, Neff opens the door to a climate-controlled growth chamber where rows of dot-filled petri dishes sit on a rack.

“Those are Arabidopsis,” he says gesturing toward the plates. “We can grow 2,000 seeds on one petri dish.” Across the aisle, another rack holds mature flowering Arabidopsis plants awaiting their scientific duties.

Neff says molecular plant sciences faculty and students share a number of other high-tech facilities as well as dedicated farmland.

“To understand how genes contribute to plant growth, we can make transgenic plants in our greenhouses where we can turn genes off or on,” he says. “Then we can use our phenomics facility to collect data on things like plant growth rate and photosynthesis.

“When we want to study what’s happening at the cellular level, we go to the microscopy facility to look at cell structure and morphology. And when people are interested in gene expression, or genomics, we have an array of sequencing machines in the School of Molecular Biosciences.”

Neff shares a story about his own work with Arabidopsis that could help safeguard Pacific Northwest agriculture in the face of advancing climate change.

“We were studying how certain proteins contribute to seedling growth in Arabidopsis and discovered you can express the mutant form of a gene and make seeds twice as big,” he says. “So we transferred the same mutant form of the gene into an oilseed crop called Camelina and it also resulted in larger seeds.

“This allowed the seeds to be planted deeper into the soil where they could access more water. By increasing seed size and weight, we were able to enhance the crop yield in dryland farming situations. We’re now doing similar experiments in canola with the idea that it might help in years of low rainfall.”

Arabidopsis also plays a role in Neff’s research on Kentucky bluegrass, much of which is now taking place at WSU’s new Perennial Grass Breeding and Ecology Farm just east of the Pullman campus.

“Most people don’t know that Washington is number one for bluegrass seed production,” says Neff, who led construction of the farm during the COVID pandemic. “Eighty percent of the seed consumed globally is produced in Washington state. Ninety percent is grown in the Inland Northwest.”

As a perennial crop, Kentucky bluegrass requires a cold winter to flower and produce seed the following year, a process called vernalization. When winters are mild, seed yields are low.

“These are the same genes that, in one mutant form, cause the difference between our winter and spring wheat,” he says.

“That’s a cool thing and something we want to do for bluegrass. Our work with the vernal genes could help maintain a stable and productive bluegrass seed industry in Washington state.” 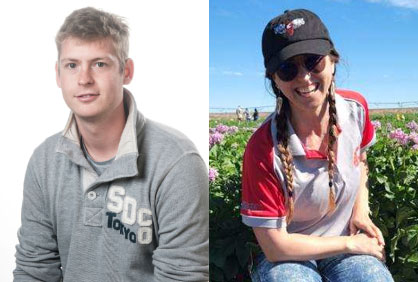