By the time the Washington State University Elson S. Floyd College of Medicine welcomed its inaugural class in 2017, Pullman Regional Hospital had been exploring a medical residency program for nearly two years. The motivation was both practical and sentimental.

“We’re located in WSU’s hometown,” says longtime hospital CEO Scott Adams. “That was a very compelling part of why we wanted to be affiliated.” 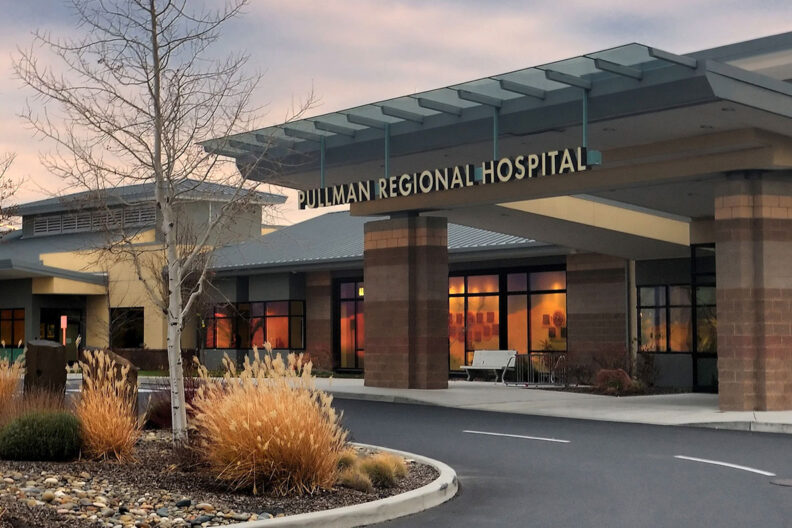 WSU and Pullman Regional Hospital are long and inextricably linked. For nearly six decades, the community hospital was located on campus and housed student health services. Today, the two institutions partner on activities ranging from COVID-19 testing, research and innovation projects, to town-gown initiatives and more.

“I can think of no better example of collaboration than the residency program. It really demonstrates not only the alignment of the two institutions’ missions and values; it also⁠—most importantly, I think⁠—demonstrates the alignment within the community for the community,” says James M. Record, interim dean of the Elson S. Floyd College of Medicine.

The new program aims to be a win-win-win for the community, university, and hospital. A 2013 study published in American Family Physician found 56 percent of family medicine residents stay within 100 miles of where they graduate from residency. Soon, Adams says, “Eastern Washington and northern Idaho will have more potential for new physicians.”

That’s a key mission of the medical school: training doctors to serve rural and vulnerable populations in Washington.

“It’s rare to have an education program such as our new family medical residency based in a critical access hospital,” Record says. “Commonly, those programs occur in large academic centers in urban areas. Some of the most underserved areas in our state are rural areas.”

After a 1903 smallpox outbreak raised concerns about where to house sick students, the college built Maple Cottage with a “small sum” from the state legislature, according to WSU’s longest serving President Ernest O. Holland. Opened in early 1904, the two-story infirmary was maintained by student fees.

But the needs of the fast-growing student population—3,129 by 1927—soon exceeded the “cottage hospital,” which was eventually razed to make room for the old Safety Building on the site of the current Jordan Schnitzer Museum of Art WSU.

Finch Memorial Hospital, named for its benefactor, Spokane mining magnate John A. Finch, was built on campus in 1928.

In the mid-1940s, a group of concerned residents formed the Pullman Community Hospital Association, which incorporated and advocated for a hospital that would serve not only students but community members. Back then, the nearest community hospital was 15 miles away in Colfax.

The group leased the hospital building from the college and, within three years, built a new wing. The expanded Pullman Memorial Hospital was dedicated in 1951.

Twenty-five years later, the hospital district formed and soon took over hospital management. Around the same time, voters approved a $3.7 million bond to again expand the hospital, re-dedicated in 1982.

When Adams arrived in 1992, on-campus parking for the hospital remained a challenge. So was keeping up with technology.

When WSU built its Veterinary Teaching Hospital in 1996, complete with a magnetic resonance imaging machine—something the hospital didn’t have—the two institutions shared the equipment. “We took the afternoons, and they took the mornings,” Adams says. “We paid them when we used it. And we set up procedures. We cleaned it and kept it safe for people, and people got their MRIs right there at the veterinary hospital. It was a unique solution.”

After two attempts, voters in 2001 approved an $8.2 million bond to build a 95,000-square-foot, 25-bed, off-campus hospital. The $28.5 million Pullman Regional Hospital opened in late 2004, just 1.3 miles from its campus location, complete with its own MRI machine.

In 2018, WSU and the hospital formalized their partnership, signing a memorandum of understanding in recognition of continuing their long-standing collaboration. The two institutions work on health and wellness support and education, clinical affiliation agreements and workforce training, human resources and employee recruitment and retention, advancement through community and alumni engagement, and innovative health solutions.

Meantime, WSU pharmacy students continue their decades-long tradition of completing introductory and advanced rotations at Pullman Regional, says director of pharmacy Andrea Howell (’89 Pharm.), whose mentor, the late Bill Gaskins (’69 Pharm.), retired in 2013 after 43 years as the hospital’s director of pharmacy. Howell has been on the job for 35. Before that, she would go to work on weekends with her dad, Jerry Baker, hospital administrator from 1974 to 1985.

Today, five of the hospital’s seven pharmacists are WSU alumni. And all of those five were pharmacist interns or completed rotations at Pullman Regional.

“The relationship between the WSU College of Pharmacy and Pullman Regional has resulted in the training and mentoring of hundreds of pharmacists that make impactful contributions to the health of thousands of people, throughout the Washington state and the country,” Howell says, noting WSU athletes—as well as athletes from visiting teams—have come through Pullman Region needing care. Sometimes, they see former Coug football player Edwin Tingstad (’88 History), chairman of surgery and one of the chief medical officers at Pullman Regional. He’s also the team physician for WSU Athletics and an assistant professor in the Elson S. Floyd College of Medicine.

Recruitment for the medical residency program takes place this fall. Matches are announced mid-March. The first three residents arrive next summer, with three more coming in the summers of both 2024 and 2025. Together, Adams says, “We’re training people to be the next generation of physicians, and we want them to be trained well and stay to serve our communities.”