What do potatoes and bananas have in common? Lack of genetic diversity.

It’s not a bad joke. In 1965, Gros Michel bananas went commercially extinct due to a fungal disease that spread throughout the world’s plantations. Today, we eat Cavendish bananas, which is why banana-flavored candy doesn’t really taste like bananas.

A hundred years earlier, the lack of genetic diversity in Irish potatoes left them unable to resist fungal disease, leading to a mass die-off of the crop. The Irish Potato Famine of 1848 claimed a million Irish lives, and millions more escaped the island and migrated elsewhere to survive.

Seed banks are one of today’s solutions to crop diversity, which has been in decline over the past 50 years, and not just for bananas and potatoes. Curators like Barbara Hellier, a horticulturist for the Plant Germplasm Introduction Testing and Research Unit at Washington State University Pullman, help maintain a variety of species through cycles of planting and harvesting seeds. 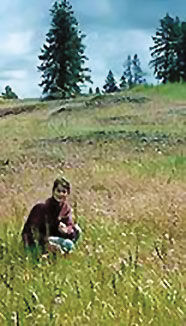 “If researchers don’t have anything to work with, they can’t combat anything new that comes up,” Hellier says. “So we provide the source material.”

The Pullman seed bank is one of 18 operated by the US Department of Agriculture’s Agricultural Research Service, and it stores crops that typically grow well in the region.

On a more global scale, in 2004 the United Nations Food and Agriculture Organization founded the Crop Trust, an organization whose mission is to bolster global food security. It operates the Svalbard Global Seed Vault, which stores backups of the world’s crop collections in case of war or disaster, using the island’s location in the Arctic Circle to ensure seed samples remain frozen even in the absence of electricity.

“If we don’t have the building blocks for the future, we’re out of luck,” Hellier says. “If we have them in the seed bank ready to go, we’re that much ahead.”