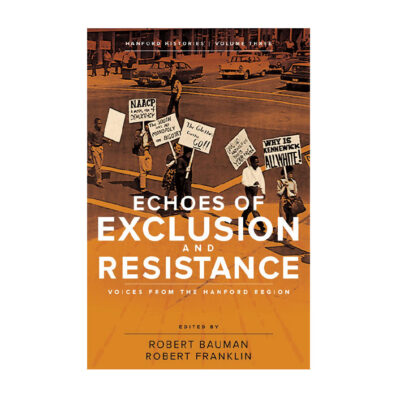 He called Kennewick “The Birmingham of Washington”⁠—and on a hot day in May 1963, Jack Tanner led a large group of Black residents, many of whom worked at Hanford, in protesting the town’s cruel exclusion of non-White minorities.

Despite the risk, they marched the streets with signs reading, “Why is Kennewick all White?” “Jim Crow is Dead, Bury Him in Kennewick,” “I Can Scrub Your Floor But Not Live Next Door,” “Kennewick Racism Must Go,” and “Where are the Dogs?”

Tanner, a Tacoma attorney and active member of the NAACP, went on to become a federal judge. But that day he and others fought a deeply entrenched system of discrimination in the Tri-Cities area that rivaled anything in the Deep South. In fact, many Black people felt racism was worse in central Washington.

This story is one of many long-forgotten incidents vividly portrayed in the third volume of Hanford Histories, part of the Hanford History Project established at WSU Tri-Cities in 2014. The book takes an in-depth look at the experiences of non-White groups whose lives were impacted by the Hanford Site and the ways they found to challenge and resist ongoing segregation and disparity.

From its beginning in 1943, when the US government appropriated 670 square miles of land along the Columbia River, the Hanford project sparked multicultural conflicts.

The Wanapum tribe, for example, was suddenly evicted from their ancestral winter village and forced to relocate elsewhere. Black Americans who migrated north in search of construction jobs were segregated in East Pasco with few services or amenities. Latinos who followed in the 1970s and 1980s were similarly steered toward East Pasco.

Many of the revelations come from oral history transcripts, including recent interviews conducted by Robert Franklin, that provide a fascinating window into the lives of Ellenor Moore, who served on the Pasco School Board and Washington State Women’s Council, and Wallace “Wally” Webster, former president of the Tri-Cities chapter of the Congress of Racial Equality and Hanford employment manager.

Overall, the volume is framed by the poignant voice of Japanese American George Yamauchi, who, while on furlough from the army in 1943 and with family imprisoned in internment camps, wrote to the editor of the Pasco Herald.

“What is an American,” Yamauchi asked his mid-Columbia community. “Is he white, black, yellow, red, or any other certain color? It is generally conceded that he is any one of these or a mixture of them all. That is one of the principles of our Constitution, is it not?”

Purchase Echoes of Exclusion and Resistance at WSU Press