Third largest in the world, Grand Prismatic is heated by an underground magma chamber that boosts the blue part of the pool to around 200 degrees Fahrenheit. As the water spreads out and cools, it creates distinct layers that support specific types and colors of heat-loving bacteria.

Not only do the bacteria tolerate extremely high temperatures, they also endure dangerously low pH levels. In essence, Grand Prismatic Spring is a beautiful vat of boiling acid.

The spring is just one of Yellowstone National Park’s 10,000 hydrothermal features that range from mud pots and geysers to fumaroles and travertine terraces like Mammoth Hot Springs. Their eruptions and bubbles indicate that the rare hotspot volcano is very much alive, a fact confirmed by constant seismic activity.

Washington State University geology professor Peter Larson has spent 16 years investigating Yellowstone’s hot springs as well as the nearby rock formations that were altered by these complex waters.

“The rocks are discolored reddish and white at the Lower Falls of Yellowstone River, where it plunges into the Grand Canyon of the Yellowstone,” says Larson. “I tried to get approval from the Park Service to do field work there in 2006, but they said it’s too difficult to recover people who fall or get injured. So, we were granted research permits to work downstream at Seven Mile Hole.”

Larson says when hot springs flow through subsurface rocks, they react with them chemically, leaving tell-tale alterations. Studying these alterations provides clues to prior activity of the hydrothermal fluids at Yellowstone⁠—including hints as to when the massive supervolcano might once again erupt.

“The last violent eruption was 640,000 years ago,” says Larson. “A thousand cubic kilometers of ash fell over much of the US, to east of the Mississippi River. It was the third in a cyclic series of eruptions at Yellowstone.

“There was a big one 2.1 million years ago that produced the Huckleberry Ridge Tuff and another about 800,000 years later with the Mesa Falls Tuff,” he says. The most recent eruption occurred 660,000 years after that, and it’s now been 640,000 years since that event. Past behavior isn’t always a true prediction of the next eruption but we’re somewhere in that window of when you might expect another big one.

“It’s not going to happen anytime soon,” he cautions. “But it would be nice to have an idea and that’s part of the motivation for our research.”

Larson says the Yellowstone caldera is a hotspot volcano that formed from an errant plume of magma rising through the Earth’s mantle. The magma melts rocks in the crust, creating the shallow chamber and much deeper reservoir that superheat Yellowstone’s hydrothermal features.

Unlike Mount St. Helens in the Cascades, hotspot volcanoes do not occur along the edges of tectonic plates. Instead, the tectonic plate moves over the hotspot, creating a chain of volcanoes, which in time become dormant as they move off the plume.

“Yellowstone is the continental equivalent of Hawaii as a volcanic system,” says Larson.

Since 2007, Larson has organized rustic research trips into Yellowstone for many of his graduate students. Though recently retired, he maintains a lab in support of his last doctoral student, Jarred Zimmerman, who is investigating altered rocks in the Grand Canyon area of the park.

“Jarred’s work is important because when basalt magma works its way into the crust beneath the caldera, it creates a rock called rhyolite that causes catastrophic eruptions,” says Larson. “We can estimate the amount of basalt being input into the crust by looking at how active the hydrothermal system has been. The altered rocks give an indication of that.”

Sampling those altered rocks, however, is dangerous and challenging.

“You have to hike three miles into Seven Mile Hole and then it drops 1,000 vertical feet into the canyon,” says Zimmerman. “I carry a big backpack with three liters of water plus rock hammers, bags, a shovel, and GPS.” And he never goes alone.

Zimmerman says that over time, changes in hot water levels created a highly acidic environment that “chewed on the rocks and made them crunchy,” which helps with identification.

“We are looking for signs of volcanic cyclicity in the rocks,” Larson adds. “Has the rate of basalt recharging into the crust been constant or varied over the years? We’re in a period right now where there’s a lot of basalt coming in.”

That finding aligns with Larson’s earlier studies on hot water discharge in the Morning Mist Springs in Yellowstone’s Lower Geyser Basin. Larson says it’s another way to measure the activity of the magma.

In 2014, he and University of Idaho (UI) geologist Jerry Fairley set out to determine how much water and heat were coursing through the hot springs.

“Basalt is coming up from the mantle into the lower crust,” says Larson. “The heat goes in the bottom and comes out at the top. We wondered if we could estimate how much magma is coming in by doing a thermal balance.”

To avoid harming sensitive bacteria living around the hot spring edges, the pair spiked the springs with deuterium, or heavy water, a safe compound that quickly dilutes to background levels.

Water samples taken throughout the day revealed, surprisingly, that the amount of magma entering the crust is likely much higher than previously thought. At the minimum, Larson estimates it as half the amount that is coming up under Kilauea volcano in Hawaii.

Their technique not only provides a new way to calculate how fast molten rock is recharging the Yellowstone caldera but also gives insights into the potential for future eruptions. The study was published in 2018 in the journal Geosphere.

Olivia Hecimovich (’21 MS Geol.) also conducted her graduate research on Morning Mist Springs during follow-up studies with Larson and Fairley. She too spiked the springs and found similar results. On days off, she joined Zimmerman in hiking the Grand Canyon of the Yellowstone and collecting altered rocks at Seven Mile Hole.

“The research was so enjoyable,” Hecimovich says. “It was a great experience. I felt like I was in the backcountry just living out of my tent. It was nice to wake up to have elk right outside and then make some coffee with my lab partners.”

Larson says his work has been successful “due to the fact I’ve had good students who are willing to climb into the canyon and carry out rocks to do analyses. It’s a great training ground and many have gone into good careers in the geosciences industry, USGS, research, and academics.”

Larson’s program has been funded by the National Science Foundation, in partnership with the UI, the United States Geological Survey, and Oakridge National Laboratory.

Before it became a volcanic wonderland in Wyoming, the Yellowstone hotspot spent millions of years “traveling” through Washington and Idaho.

Ferried by plate tectonics, the North American continent has been gradually moving west over a plume of molten magma that periodically burns through the Earth’s crust, spewing lava onto the surface. As the continent moves off the plume, a trail of dormant basaltic floods and calderas is left behind.

That plume or hotspot once occupied the grounds of Washington State University Pullman, where evidence of volcanic flows can be seen in the rocky cliffs that border the southwest corner of campus.

“We’re sitting on some of the earliest history of the hotspot right here with the Columbia River basalts which underlie Pullman to the depth of 2,000 feet,” says WSU geology professor emeritus John Wolff.

“Those lavas were erupted from gigantic fissure vents that extended down through southeast Washington and Oregon 16 million years ago. We know because we have vertical walls of rock called dikes that are exposed in this region.”

Wolff says the massive eruptions created a basaltic floodplain that stretches from Spokane south to the Oregon-Nevada border⁠—and from the Idaho panhandle west to the Pacific Ocean. Similar fissure vent eruptions have recently taken place on Hawaii’s Kilauea volcano.

According to retired San Diego State University geologist Victor Camp (’76 PhD Geol.) the Yellowstone hotspot can be traced back even further to the Pacific Ocean off the coast of Washington.

Camp speculates that prior to 50 million years ago, the hotspot was part of the Siletzia oceanic plateau which later crashed into the North American continent during the Eocene. Evidence of the event is visible in exposed fragments of Siletzia rock on Vancouver Island, the Olympic Peninsula, and the Coast Ranges of Oregon and Washington.

From there, Wolff says, the hotspot slowly moved east eventually flooding the Pacific Northwest with layers of basalt.

Then, about 14 million years ago, along the southern Idaho-Oregon border, something strange occurred. The hotspot’s fissure vent eruptions abruptly gave way to caldera volcanoes capable of producing super-eruptions.

“The calderas progressively formed a chain all the way through southern Idaho leading up to the present-day location at Yellowstone,” Wolff says. “There were many calderas in the Snake River Plain 8–11 million years ago, and they produced huge eruptions of the Yellowstone type.”

Not only did the hotspot volcanoes change physical form, but their magma type changed as well. Gone were the placid basaltic flows. These calderas erupted extremely dangerous rhyolite, a type of rock that is formed when magma melts granite in the Earth’s crust.

A rhyolite eruption explodes with showers of molten glass that essentially enamel the entire landscape, killing every living thing on the surface. Ash particles also shoot into the stratosphere and gradually spread around the globe.

Wolff holds up a large chunk of shiny black rock. “The calderas erupted a kind of obsidian with crystals called vitrophyre,” he says. “It’s typically black glass which mostly crystallizes into gray rock soon after eruption.

“We find examples of it in bluffs all over southern Idaho, in the mountains and in the Bruneau Hot Springs area. The Black Rock Escarpment is a spectacular exposure. You can see layers in the cliffs there and each layer was a different eruption.”

Wolff says that in the future, the Yellowstone hotspot will likely continue to travel in an east-northeast direction toward Montana. Though nobody knows for certain, it could potentially keep moving forever. 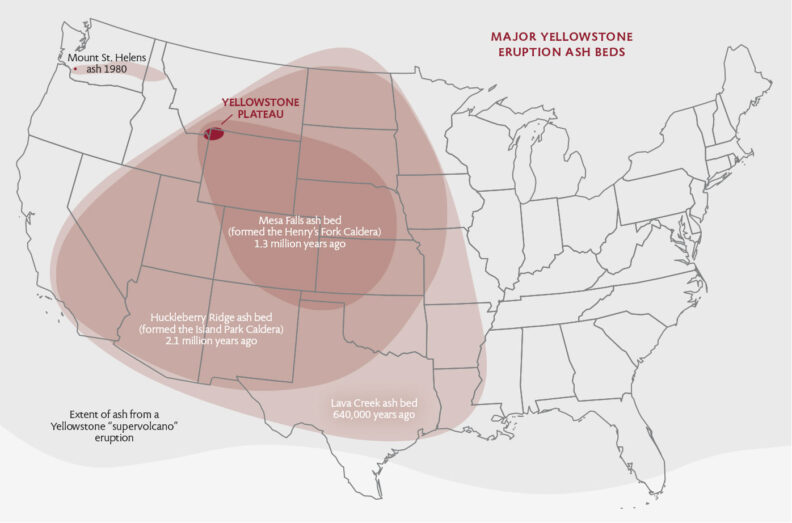 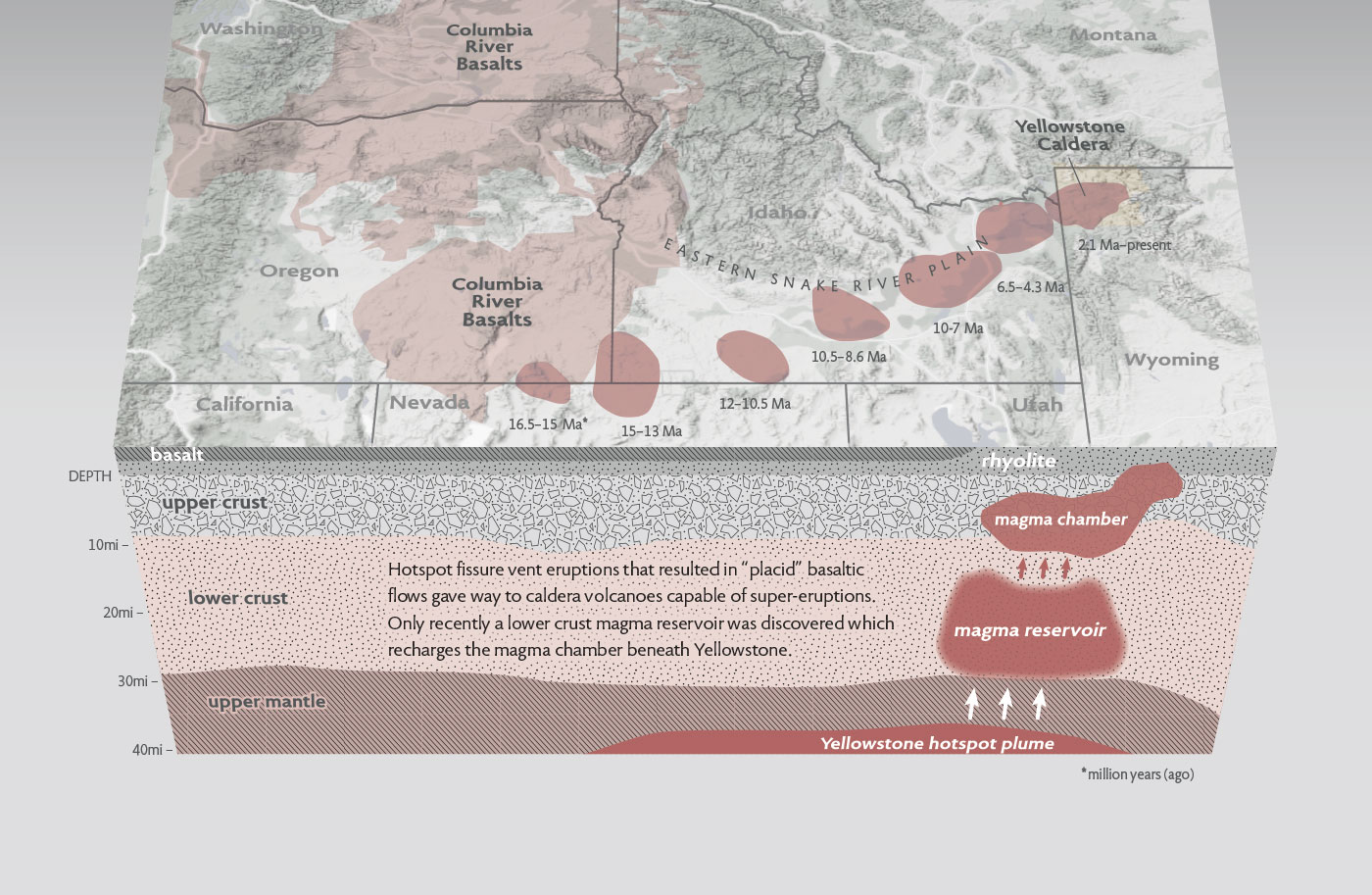 Large volcanic eruptions from 1800–present in the United States