Last July, as the United States began its military drawdown from Afghanistan, a smaller American force toiled behind the scenes to ensure the safety of those remaining at the US Embassy in Kabul.

One of America’s largest diplomatic missions, the embassy, before closing in August, was a massive 15-acre complex protected by 10-foot blast walls, heavily armed US Marines, explosive-sniffing dogs, and lots of technology.

“In Diplomatic Security, our job is to protect the embassy, to work closely with the Department of Defense to ensure everyone in that compound is safe,” says Matthew Percival (’01 Elec. Eng.), director of the Office of Technology Innovation and Engineering in the US State Department in Washington, D.C. “We had many visa discussions going on in Kabul during that time as people rushed to evacuate the country.” 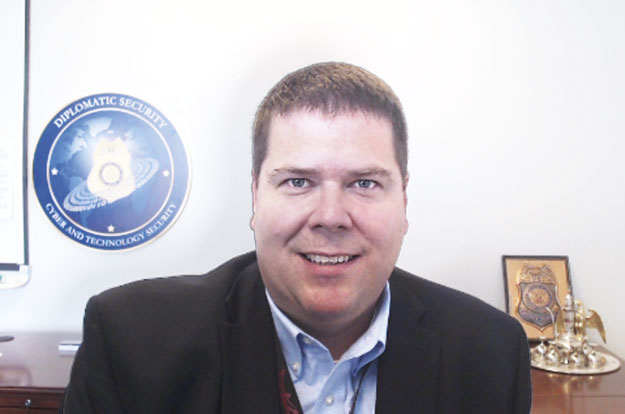 Percival, a security engineering officer in the State Department’s Diplomatic Security Service, oversees much of the US counterintelligence effort and also leads teams in the development of high-level technology.

Since the Cold War discovery of the “Great Seal Bug,” a covert listening device ingeniously planted in the US ambassador to Russia’s Moscow study in 1952, the Diplomatic Security Service has employed people to detect such devices and prevent them from stealing national security information.

In 2020, Percival was presented the Robert C. Bannerman Diplomatic Security Employee of the Year award for his leadership in the development of an advanced cybersecurity system known as Rio Celeste, which deployed earlier this year.

“The question was, ‘How do we protect sensitive information in a world where streams of data are constantly flowing through the air creating vulnerabilities and potential threats?’” says Percival. “Almost every agency overseas and in Washington, D.C. has some presence they need to protect. Our vision was to create a wireless countermeasure the entire government could use.”

To that end, Percival formed a team of radio frequency (RF) professionals from the US intelligence community and Pacific Northwest National Laboratory in Richland. Together they developed a system based on emerging technology in software-defined radios, which use digital and wireless technology instead of traditional analog.

The new system can analyze all RF in a specific area and then, through artificial intelligence and machine learning, provide real-time updates on dangers or vulnerabilities.

“Our system will detect any RF energy but we’re mainly looking for cell phones,” Percival says. “We want to make sure the classified discussions of top dignitaries like the secretary of state are private and protected. Cell phones are one of the main problems, especially overseas where they might be connected to another country’s network.”

Percival says RF technology has greatly advanced over the last decade with the advent of 5G mobile networks, the Internet of Things, and smart cities.

“It was the perfect time to leverage all the science and advancements that both the federal government and private sector have put into these,” he says. “Our goal is to continue evolving the Rio Celeste program for the next 10 or 20 years. It’s an area where our cities, buildings, and for us, ‘the threat,’ will continue to advance as everything shifts to wireless.”

Prior to his current post, Percival worked for the US Foreign Service protecting lives, information, and US embassy facilities in Uruguay, Tunisia, El Salvador, and Russia.

“I’d be in charge of making sure everything worked, from counterterrorism ballistic-rated barriers to security systems, alarms, locks, and cameras,” he says. “The discussions in our buildings are wanted by others, so, it’s important to keep our diplomatic playbook safe.

“As an American envoy living in Moscow, for example, we always felt there were eyes watching us. There’s always counterintelligence and someone’s always following you. It’s just the nature of the job.”

Percival says beyond the RF program, they have an array of countermeasures to protect US personnel and property, including systems for drones and incoming mortars.

“Security engineers like myself help manage our programs by developing those systems, choosing them, and working with the military,” he says. “It’s a great career, and I’d love to see more Cougs join our department.”