Hikers and nature lovers have watched for years as snow has shrunk away from mountains and glaciers. In the freakishly hot summer of 2021, even Mount Rainier saw its snowpack fade at an alarming rate.

The diminishing view of snow on mountain peaks foreshadows a much larger impact of warming temperatures on the Pacific Northwest: declining snowpack means less water later in the summer for irrigation, fish, hydropower, residential, and other uses.

“We have a temporal mismatch between water availability and water demand,” says Jennifer Adam, Berry Distinguished Professor of Civil and Environmental Engineering at Washington State University.

In particular, the Columbia River basin derives an average 60–70 percent of its annual streamflow from snowpack melt. However, in recent years, the peak snowpack is earlier, the decline is faster, and the duration is shorter, leading to less water availability when it is needed most in the summer.

The Pacific Northwest is particularly vulnerable to changes in the snowpack because of its outsized importance for storage.

“On average, we can only hold maybe 30 percent of the annual streamflow behind dams,” Adam says. “That’s in contrast with other river basins, like the Colorado or the Nile Rivers.”

Because water is so crucial for power, fish, and agriculture, the Washington State Department of Ecology commissions a long-term water supply and demand forecast every five years. Adam worked on the next forecast, slated for November release, that looks 20 years ahead and, for the first time, 50 years out.

Scientists at the Pacific Northwest National Laboratory (PNNL) have also been monitoring and modeling regional snowpack and subsequent water flows for many years. Their results show warm temperatures can affect snowpack.

Ruby Leung, a PNNL atmospheric scientist, says that, due to warmer temperatures, “even if there is no change in the amount of precipitation in the future, you would expect that the precipitation would be falling more as rainfall rather than snowfall.”

Increasing rainfall leads to faster melting of the snowpack. Leung and her fellow researchers, including PNNL watershed hydrologist Mark Wigmosta, study atmospheric rivers that dump a lot of warm rainfall. They have 40 years of measurements that show an increase in these rain-on-snow events.

And, “projections are also very clear that atmospheric rivers in terms of the frequency will increase,” Leung says.

Dust, as well as ash from increasing wildfires, add to the problem, she says. It collects on snow and reduces the ability to reflect sunlight, thus raising the temperature and leading to earlier melting.

As the availability of water supplies shifts earlier in time around the Cascade Mountains, water users must adapt. They rely on forecasts such as the Columbia River report and PNNL’s work to make adjustments.

The forecast helps improve understanding of where water is most critically needed, now and in the future, Adam says. In addition to Adam, 19 WSU researchers are involved, along with consultants, the University of Utah, and the Department of Ecology.

Adam says this group and others at WSU want to work more toward formulating a number of “what if?” scenarios around water storage and scarcity.

For example, “what if we had the three-year drought that California had? What would that do to our system?” Adam asks. “What does that mean for managing our storage? What if we have a major northward migration of vegetable production?”

Many farmers are already adjusting with more water-efficient irrigation practices, earlier planting, and different crops. Yet, water will inevitably be curtailed for some users.

She notes that Washington state will need to change how water is stored. “The shift in timing points to seasonal storage. We’re losing our snowpack and becoming more reliant on the reservoirs,” Adam says.

Another avenue could be maintaining the snowpack. “We’re looking at how we can take different measures to improve the snowpack duration,” says PNNL hydrologist Ning Sun.

She explains that creating openings in the forest would help sustain the snowpack longer because not as much snowfall would be blocked by trees. “Past observations show the interception by the tree canopy could reduce snowfall peaks by 50, even 70 percent.”

“A lot of times the first climate change signals show up in the snowpack,” Wigmosta says. “There’s going to have to be an ongoing effort on improved water use efficiency.” 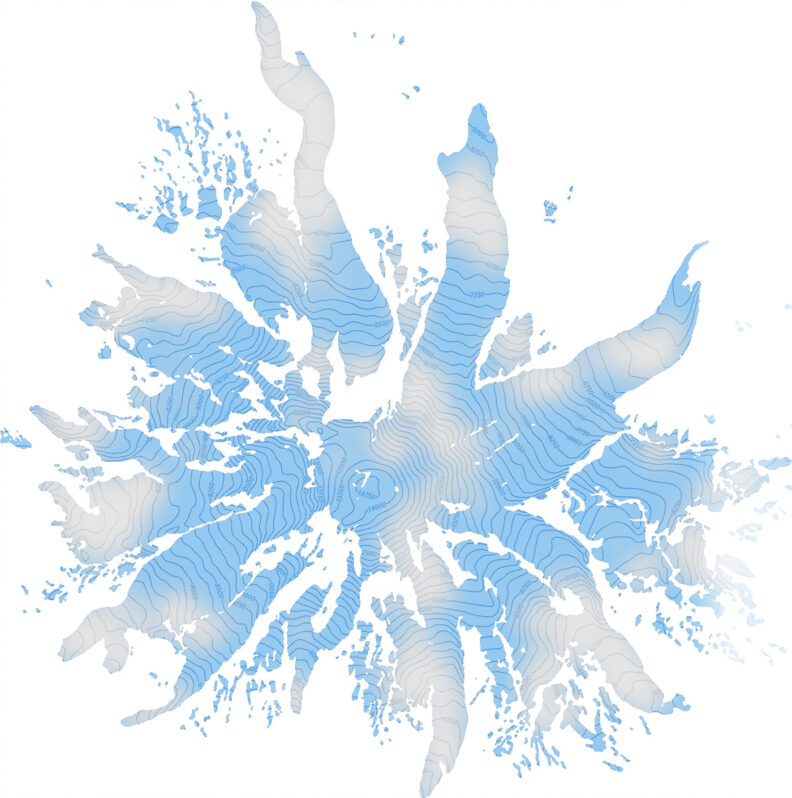 Click on image for detailed illustration with named glaciers (PDF)