“To those who are interested in the educational affairs of the state, and desire to see the best interests of the Agricultural College advanced, we cordially extend greeting in the first number of our college paper⁠—The Evergreen.”

Since these words appeared in March 1895, the student newspaper of Washington State University has provided a first draft of history, recording campus and Pullman news, life on the Palouse, student opinion, and more. For more than 125 years, the Daily Evergreen has done double duty, serving as both a source of information and a training ground for student journalists. The experience has helped alumni land jobs in newsrooms throughout the country⁠—from the Moscow-Pullman Daily News and Spokane’s Spokesman-Review to the New York Times.

“I think of it as a learning lab for our students,” says Bruce Pinkleton, dean of WSU’s Edward R. Murrow College of Communication. “When I talk with our alumni, they single it out as a turning point in their education. The Evergreen is almost like finishing school for our journalism program. It’s true-to-life journalism experience in many respects. It’s something I really believe in. It is an outstanding student publication.” 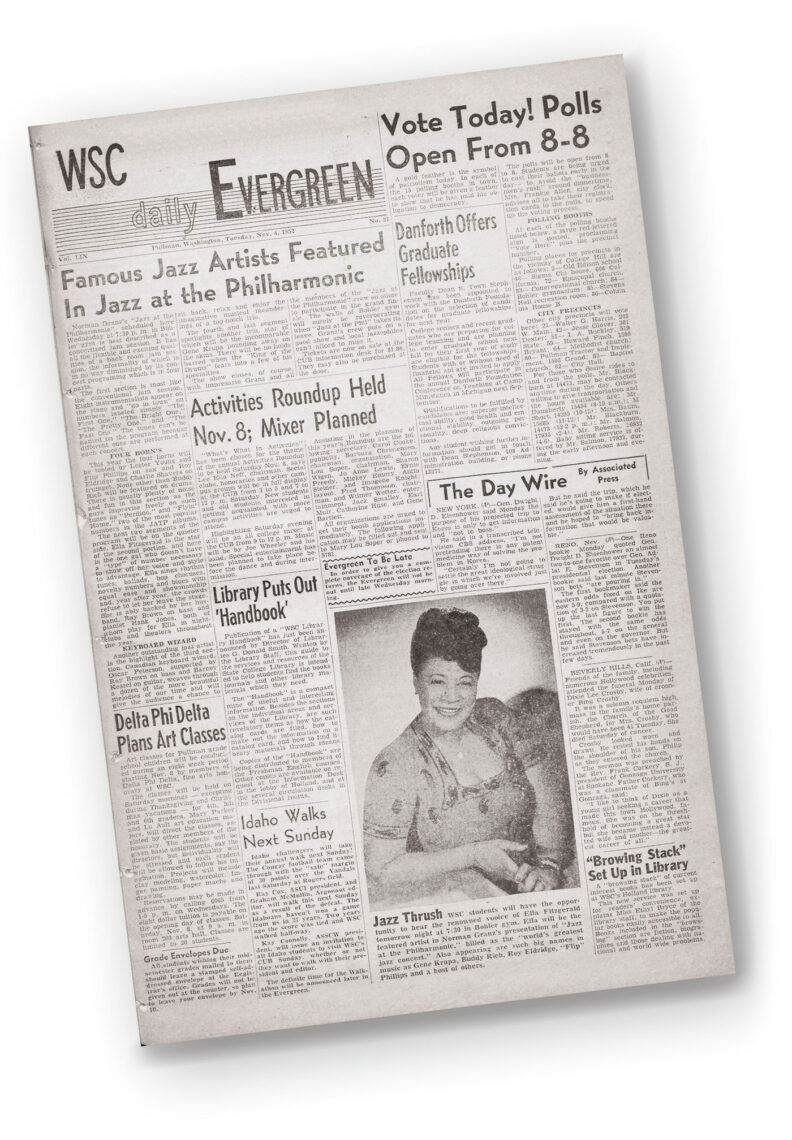 The Evergreen technically isn’t part of Murrow College. It’s housed under WSU’s Office of Student Media and supported by services and activities fees, a student fee, and sales of ads and Chinook yearbooks.

“A lot of Murrow students have worked there,” Pinkleton notes. “But students from across campus can and do get involved. It’s one of those experiences that galvanizes students. You all pull together and work under the duress of deadlines. And you’re working on stories that make a difference.”

Those stories have included cadets leaving campus to fight in World War I, the gym transforming into a sick bay during the 1918 Influenza Pandemic, the 1931 Rose Bowl, and the ringing of the Victory Bell to signal the end of World War II.

“Students do more than make memories at the Evergreen,” Pinkleton says. “It helps them develop the professional skills they need to succeed. Historically, that’s been the Murrow calling card: students at the undergraduate level who have a lot of hands-on experience. The paper has a history of moxie. In a sense, it doesn’t change much over the years.”

The first issue of 1899 asserted: “Let the editorials be fearless. Not too radical, but exceedingly truthful. Not always fault-finding, not always commending. Giving credit for all that is good, but speaking with undisguised plainness as to those things that injure the reputation of the college and lower the standard of college life. The college paper ought to be the voice of the student body itself⁠—against all that lowers, in favor of all that uplifts.”

By the end of 2019, the Evergreen had published more than 144,700 pages in more than 13,800 issues. About 40 issues are lost to history. The rest are available in the Manuscripts, Archives, and Special Collections (MASC) at WSU Pullman. MASC also contains copies of the College Record, the Evergreen’s predecessor, published in 1892 and 1893, as well as approximately 60 issues of alternative papers published by students unaffiliated with the Evergreen, including the Upstream (1939 to 1941), Burgerville Blues (1970), and more.

The Evergreen’s initial issue was 12 pages, carried no photos or bylines, and featured a section called “Personals.” It was printed at the Pullman Herald, a practice that took place for decades. “A staff member, and usually the night editor, would walk or bicycle the copy over to be printed,” the late Maynard Hicks recalled in a special centennial issue published October 4, 1994. He taught journalism at WSU for 35 years, retiring in 1972, then returning in the 1980s.

In 1996, the Evergreen launched its website. Photography was all digital by 2002. News continues to be published online five days per week at dailyevergreen.com. Due to the persisting COVID-19 pandemic, the Evergreen went online-only for summer 2020 and switched to a weekly printed product last fall.

“When I was there it was typewriters and an AP (Associated Press) teletype machine rattling away,” recalls Bruce Amundson (’75 Poli. Sci.), a member of Murrow College’s professional advisory board. He worked for the Bellevue Journal-American before moving into corporate communications at Pacific Northwest Bell and the Weyerhaeuser Company.

“Everything I learned was on the job at the Evergreen,” he says. “If I made a mistake, I made a mistake for everybody to see. I learned a lot working on deadline. I got time management experience. And when I became sports editor my sophomore year, I started hiring people and managing them. I learned how to identify talent. It served me well. I built on it after that, but it gave me a foundation.”

Amundson served as assistant sports editor, sports editor, managing editor, editor-in-chief, and editorial page editor. He was working at the Evergreen in 1972 when it moved to its current location in the Murrow Hall basement. For 20 years before that, the newsroom was in the CUB basement. The paper started in a basement, too⁠—in Old College Hall⁠—as a monthly. It later became a weekly, then a twice-weekly, and continued to grow⁠—publishing three, four, then five times a week.

“We very much lived there,” says Lisa Cowan (’89 Comm.), Evergreen editor-in-chief in spring 1989. Adviser Lois Breedlove “used to say journalism was the last ‘white-collar trade.’ You have to do it to learn it. We covered a lot of stuff, not just student-related stuff. We covered the city like a regular local paper. We were, in a sense, competing with the Pullman-Moscow paper. The biggest challenge was we published through dead week, the week before finals. Reporters would disappear. You’d hear, ‘I’m going to fail biology if I don’t study.’”

Now a night digital editor at the New York Times, Cowan “graduated on Saturday and started working at the Spokesman on Tuesday⁠—with no break (from journalism) since. I felt very prepared because of what I learned at the Evergreen. It was run very professionally.”

Ten years after Candace Baltz (’02 Comm.) graduated, her career circled back to WSU. The former Evergreen editor-in-chief returned as director of student media. For three years, she advised the Evergreen staff, telling students “to always ensure you’re presenting your best self when you’re reporting and defending the public’s right to know.”

She says, “WSU⁠—and Pullman⁠—is a really, really great place for a fledgling journalist. You get to experience what it feels like to influence a community.”