They said it couldn’t be done. But this writer, for one, has sampled the complex, toffee-like flavor of bigleaf maple syrup produced right here in Washington state.

The deep amber liquid is less sweet than the Midwest and eastern varieties, and thanks to its high mineral content, offers a rich earthy note that leading Seattle restaurants covet for specialty dishes and drinks.

That’s not to say it can’t be enjoyed on pancakes, says Neil McLeod, owner of Neil’s Bigleaf Maple Syrup company in Acme, where he taps 1,200 maple trees along the Nooksack River and cold ravines near Mt. Baker. His is the first successful commercial maple syrup operation in the Pacific Northwest.

“When I started in 2011, I could barely get a drop out of the trees,” McLeod says. “But now we’re producing 500 to 700 gallons of syrup per year. We just planted 3,500 new trees all over the property from swamps to the mountains⁠—in shade, sun, all different environments⁠—to see what does best.” 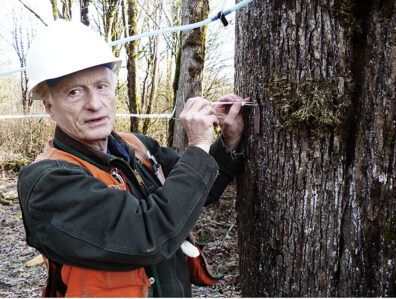 Craney says some of those landowners had been toying with the idea of producing maple syrup, including McLeod, who at the time was cooking his bigleaf sap over an open fire. Intrigued, Craney joined McLeod’s operation⁠—answering questions, doing research, and helping tinker with the production process.

“Eventually, Neil said he’d like to make a commercial venture out of it,” Craney says. “But going from hobby to commercial is a huge leap and we had a lot to learn. As a hobby, you might boil 40 gallons of maple sap per day but as commercial, we boil around 4,000 gallons per day. It’s a whole different ball game.”

Since that time, Zobrist and Patrick Shults, WSU Extension forester for southwest Washington, have joined in with new programs aimed at maple syrup production for hobbyists. In addition, scientists at the University of Washington are investigating the potential for large-scale commercialization in the Northwest.

He says Washington state has one of the strictest riparian zone management systems in the country, which is environmentally friendly but limits a landowner’s harvest flexibility.

“Riparian is the buffer zone along both sides of a stream,” Ganguly says. “The buffer increases to 200 feet if the stream has fish. You can’t harvest trees the same way as in non-riparian zones, so many small landowners lose income from not being able to sell timber.

“If we make maple syrup production an income-generating opportunity for these landowners, they can actually recoup some revenue and also practice sustainable forestry and get certified,” he says.

With 2019 grant funding, Ganguly’s team set up their first syrup research site at the UW Pack Forest in Eatonville. In 2020, they added additional sites including the WSU Environmental Field Station at Meyer’s Point near Olympia, which is managed by Shults.

Shults, Zobrist, and McLeod collaborate with UW through data sharing and expertise.

Bigleaf maples, which grow from sea level to 3,000 feet in western Washington, Oregon, and British Columbia, require a freezing period followed by a thaw to get their sap flowing. Tapping season generally runs from November through February.

At Meyer’s Point, sap is collected through a natural gravity vacuum system which consists of a long series of tubes that drain into holding tanks. Since most bigleaf maples grow on sloping banks, this system is a good fit for hobbyists. Commercial producers like McLeod typically rely on electric pumps to create the vacuum. 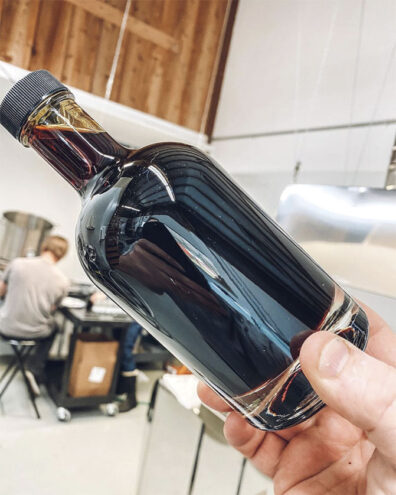 “Being at sea level, we didn’t anticipate there would be much sap production because the temperatures are so moderate,” Shults says. “But we had freezing weather, and the trees produced a lot. It’s a very unique product.”

Ganguly says their end goal is to estimate how much maple syrup can be commercially produced in Washington state and how large the industry can be.

Shults plans to share UW’s research findings with landowners who are interested in commercial production but says there is also tremendous potential in the hobby scale.

“It’s a fun way of getting forest owners, families, and communities engaged with their forest,” he says. “It can help create an attachment to the land that in the long run might prevent them from selling it off and subdividing.”