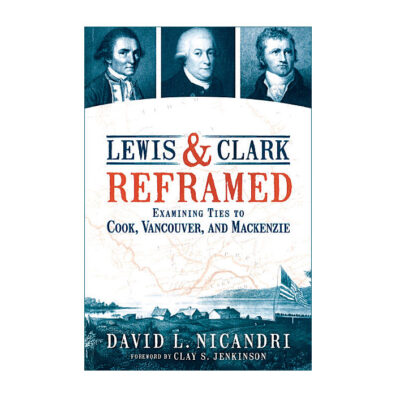 Meriwether Lewis and William Clark, along with the rest of the Corps of Discovery appointed by President Thomas Jefferson, inspired the young nation and gave credence to US claims across the continent.

But the journey did not take place in a vacuum.

David Nicandri takes the Lewis and Clark story beyond the almost mythical narratives of the expedition as an exceptional, first-of-its-kind event and makes connections to earlier British explorers of the Pacific Northwest: James Cook, George Vancouver, and Alexander Mackenzie. As the book notes, there is a tendency to view the Corps of Discovery’s journey as a tabula rasa, rather than occurring in the longer and wider context of prior exploration and the search for the Northwest Passage.

The American explorers, once they crossed the Rocky Mountains, relied heavily on Mackenzie’s 1801 book, Voyages from Montreal, almost as a trail guide and even plagiarized entire paragraphs in their journals. Cook’s literary writings about his journeys through the North Pacific and along the West Coast also informed how Lewis and Clark wrote about their travels up the Missouri, across the mountains, and along the Columbia River.

Much has been written about Lewis and Clark and the expedition, but Nicandri carefully analyzes the explorers’ journals as more than scientific information because “to an extent that is too little appreciated, exploration was also a literary phenomenon.”

The literary aspects of Lewis and Clark’s journals owe quite a bit to Cook, the iconic explorer of the time, and to the Scotsman Mackenzie, who crossed North America a decade before the Corps of Discovery. Lewis, in particular, emulated Mackenzie and Cook in his literary flourishes, such as descriptions of waterfalls and insistence that words were inadequate to capture sublimity.

Lewis & Clark Reframed goes beyond the literary analysis and probes other questions about the Corps and expedition. It describes how Lewis often sought full and first credit for important discoveries. Nicandri also speculates on missing journals from the Corps.

The book examines Lewis’s homesickness during the journey and his friendship with future US Senator and New Jersey Governor Mahlon Dickerson, providing insight into Lewis’s inability to complete his book about the expedition, mental decline, and eventual suicide.

Nicandri, former director of the Washington State Historical Society, also wrote River of Promise: Lewis and Clark on the Columbia. As a prominent historian and writer about Lewis and Clark, he shines new light on how the famous expedition was influenced by other Enlightenment-era explorers who visited the Pacific Northwest before the American captains. Each essay is written clearly, rich with details that deliver insights into the explorers within their global context.