Get out your baskets and buckets. It’s berry-picking season.

Wild berries abound in Washington state in summer and fall. From tart to sweet, and deep purple to peachy pink, they come in a rainbow of colors and variety of shapes, sizes, textures, and flavors. Some are so delicate, it’s best to immediately eat them; they don’t travel well. Others bake beautifully into pies, tarts, and cobblers, or cook down into sweet-tart jams and sauces to top everything from ice cream to thick-cut steaks.

Finding wild berries can take patience. But if you know where to look, how to recognize them, and which ones to avoid, you can graze through the greenery, turning your summertime treks into wild and wonderful feasts, rich in antioxidants, fiber, vitamin C, and other nutrients.

Rick LaMonte’s favorite berry is deep purplish black. The founder of Northwest Wild Foods in Burlington prefers trailing blackberries, which his company calls Wild Mountain or Little Wild blackberries. “Little Wild Blackberries are like no other berry in the world,” he says. “I’d rather have a Little Wild Blackberry pie for my birthday than anything else. Add a scoop of vanilla ice cream, and you’re just in heaven. If I was going to die of a heart attack, that’s how I’d like to do it. But I’d like to finish the dish first.”

LaMonte founded Northwest Wild Foods in 1988 and soon began supplying trailing blackberries to Anthony’s Restaurants, including Chinook’s at Salmon Bay. It was there in 1991 that Atlantic food writer Corby Kummer tried “one of the best (desserts) I’ve ever been served in a restaurant”⁠—the wild blackberry cobbler.

LaMonte first picked wild blackberries as a boy in the late 1940s in the South Puget Sound region. “They go all the way back to pioneer days. My grandmother was born in 1883, and she harvested them,” he says. “You would never tell anybody where your patches were.”

The same is true for huckleberries, which enjoy a cult-like following throughout the Pacific Northwest. “Their flavor is legendary,” says Amit Dhingra, interim chair of the Department of Horticulture and director of the Genomics Lab at WSU’s College of Agricultural, Human, and Natural Resource Sciences. He first tried huckleberries upon moving to Pullman in 2006. Today, Huckleberry Ripple⁠—huckleberry ice cream with a huckleberry swirl⁠—is his favorite flavor at Ferdinand’s Ice Cream Shoppe on the WSU Pullman campus.

While he hasn’t foraged huckleberries, researchers in his lab have been growing their own for about ten years. “I was told it was impossible to grow huckleberries outside of their natural environment, that people have tried transplanting them from their place of origin and they do not survive,” Dhingra says, noting the researchers in his lab “are an adventurous group.” When lab manager Nathan Tarlyn proposed the idea of attempting to cultivate huckleberries, “I said, ‘Let’s try that.’”

They bought seedlings from a native plant nursery, and, “over the years, developed a method to grow huckleberries in a greenhouse. One could grow them in a controlled environment year round for a specialty market, but it would be at a high premium. Now, our approach is to try to bring the best traits of huckleberries⁠—that legendary flavor⁠—into blueberries, which are already grown commercially. That would benefit blueberry growers. But it would also help prevent excessive foraging of huckleberry stands on public lands.”

Before the pioneers, wild berries served as a traditional staple for Pacific Northwest indigenous peoples for centuries. In their journals, while wintering at Fort Clatsop in 1806 in what’s now Oregon, both Meriwether Lewis and William Clark noted the plentiful salal berries, which Clark compared in size to “buck shot.” Lewis described how Native peoples ate them “when ripe immediately from the bushes” or dried them in the sun or in kilns for later use. “Very frequently they pound them and bake them in large loaves of 10 of fifteen pounds,” he wrote, adding the loaves kept “very well during one season.”

Lewis and Clark’s journals also noted Native peoples tended to favor salmonberries, thimbleberries, and wild strawberries over salal, eating them fresh because they’re too soft to dry. Now, like then, they might end up in your mouth without ever making it into your picking pail⁠—except for maybe bearberries, which might not make it into either. 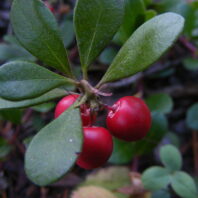 Bearberries (Arctostaphylos uva-ursi)⁠—Although pretty in color, these bright red berries, also called kinnikinnick, aren’t pleasing on the palate. Their skin is thick; their texture, mealy. Boiled and dried, they taste a bit better. But that doesn’t mean Lewis liked them. He called them tasteless and insipid. “The natives usually eat them without any preparation,” he wrote, adding they would hang the berries “in their lodges in bags where they dry without further trouble, for in their most succulent state they appear to be almost as dry as flour.” 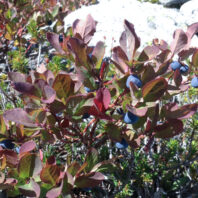 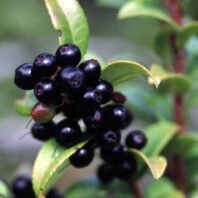 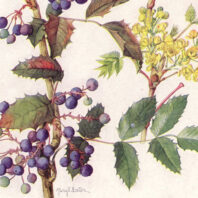 Oregon grape (Mahonia nervosa)⁠—Beware of the leathery, sharp-tooth, evergreen leaves⁠—reminiscent of holly⁠—when foraging these sour berries, similar in appearance to blueberries. Native peoples used to pair them with salal berries to sweeten them. 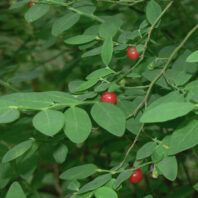 Red huckleberries (Vaccinium parvifolium)⁠—These bright red, round, pea-sized berries taste like the darker variety and are most often found growing out of nurse logs or near downed trees or stumps. 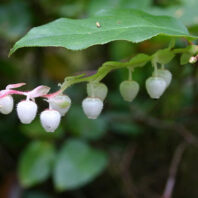 Salal berries (Gaultheria shallon)⁠—These dark purplish berries are commonly found in coniferous forests and moist, shady areas. They have a somewhat mealy texture, so use them in pie, jam, or jelly. 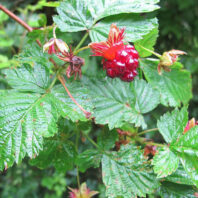 Salmonberries (Rubus spectabilis)⁠—Resembling large raspberries but ranging in color from yellow to peachy pink and orange, these mildly sweet berries grow in moist, shady areas. Watch out for their thorns. 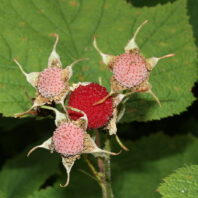 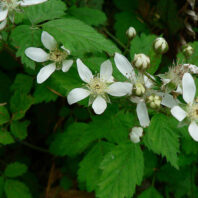 Trailing blackberries (Rubus ursinus)⁠—Found in sunny brambles, dry open forests, or logged or recently burned areas, these blackberries are smaller than the invasive Himalayan variety but full of flavor. Beware of their thorns.

The secret life of huckleberries