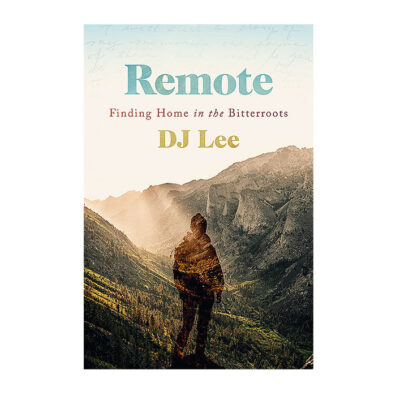 Nearly 20 years ago, I told the writer DJ Lee, a Regents Professor of literature and creative writing at Washington State University, how an early morning drive down windy Highway 12 along the Lochsa River, where clouds ghosted the water and the close, moist air offered the spice of western red cedar, had transformed me and led me to move to the Northwest. DJ and I were having tea at the old Bookie across the street from her office in Avery Hall on the WSU Pullman campus. She told me that her family had homesteaded land above the Selway River. Her grandfather had worked for the U.S. Forest Service, early in its history, in the Bitterroots.

DJ did not then know much about the Bitterroots or the experience of her family in the mountains, but a few evocative photographs of her grandfather and sporadic diaries written by her grandmother had infused her with desire to write a book about her family in the wilderness.

Remote: Finding Home in the Bitterroots offers that family story and the intriguing narrative of DJ’s own possession by the land between the Lochsa and Selway Rivers. Her story tests how the rugged Selway-Bitterroot Wilderness, where no one now permanently lives, bonds us to others. DJ trails the mountains to connect with her mother, to locate the displacing wildness of her grandfather, and to query the emotional disjunctions of her grandmother.

The inscrutable land drives DJ toward guides and mentors that deepen the Bitterroot story. One mentor, Dick Walker, a former Forest Service employee and pilot, surges through Remote’s narrative like a cascading river. Walker, whose feral energies parallel those of DJ’s grandfather, has an archive of Bitterroot photographs and documents, including, mysteriously, a collection of DJ’s family photographs.

Both rivers and books may change course over time. About a year ago, while we sat at a campfire on a rainy, chill night beside the Selway, DJ told me how Remote had changed course, finding its final form. Connie Johnson, a charismatic transplant from Iowa to the Bitterroots, who served for decades as a backcountry ranger, had disappeared in the wilderness beyond Big Fog Mountain. Johnson had lived part-time in the log cabin DJ’s grandfather had built above the confluence of the Selway River and Moose Creek. Over wine on the cabin porch, Johnson helped DJ understand how a woman could flourish in the wilderness. Then Johnson disappeared, disrupting DJ’s sense of the woman’s power. That disruptive disappearance brought Johnson to the front of the book and set its theme: possession by place is transforming. Possession connects us, takes us into wood, makes us bright berries and soft leaves, and mixes us with grit and fertile soil.

Remote transforms us readers as we follow DJ’s possession by the Bitterroot Mountains, the Lochsa and Selway, and the people of these places.