As the COVID-19 pandemic claws at the fabric of American society, the worst affected are those in our most underserved communities. With bodies and spirits already pushed to the limit by chronic diseases—racism, diabetes, substance use disorders, and more—Native American communities suffer terribly as nurses, doctors, and their colleagues scramble to treat those they can.

Among those on the front lines of the pandemic are former participants of a Washington State University program, Na-ha-shnee, the Native American Health Institute. People like Rhonda Martinez-McFarland, a Spokane nurse practitioner and a commander in the U.S. Public Health Service. People like Hailey Wilson, a Nez Perce doctor working on the White Mountain Apache Reservation in eastern Arizona. And Shoshannah Palmenteer, a health clinic administrator and Colville tribal member working with her people in Grand Coulee.

The hundreds of participants in Na-ha-shnee’s long history are helping to heal a broken health care system. Native American high school students, profoundly inspired by what they learn at the hands-on, experiential health sciences camp, share in the beauty and wisdom of their cultures while also discovering that they can make a positive difference in the health of their communities. Na-ha-shnee, quite literally, unleashes strong medicine for the body and the soul.

The story of Na-ha-shnee begins with the hiring in 1995 of Robbie Paul, a Nez Perce woman who worked tirelessly to recruit and encourage Native students to pursue careers in nursing. Indefatigable, Paul has been retired from her position as director of WSU’s Native American Health Sciences program for a few years but she still mentors students.

“The original idea for Na-ha-shnee was based on Native input,” Paul recalled recently. She had a Native American advisory board to help guide her, as well as rich collaborations with Barbara Aston, former tribal liaison for WSU, and the late Sharon John, a nurse and Yakama-Umatilla tribal member.

Hands-on experiential learning is “a proven model,” Paul says, that opens doors for young people who might not have otherwise considered a career in health care. The impact is amplified when Native professionals serve as camp counselors and share stories of their own journeys.

Janet Katz, one of Paul’s longtime collaborators and a professor in WSU’s College of Nursing, is a staunch supporter of Na-ha-shnee, as much for what the program does to bring Natives into health professions as for inspiring young people to go to college, whatever career they choose. “People with more education are healthier, they have higher incomes,” she says. “There is so much inequity in our society and usually the ones who get to go to college happen to be born into situations where they also have opportunities.” Katz and others have shown that diversity in health care has a positive impact on quality of care and on health outcomes.

A college campus could be stressful for students who’d grown up on a reservation. Paul, Katz, and their colleagues found ways to help their students express their fears, doubts, and hopes. One way was by taking a photo that represented something that concerned them, or that they hoped for. Katz recalls, “One student took a picture of a ladybug on a tree trunk, saying ‘I am small, but college and a career are big!’”

I am SmalL—We are Great

From the very beginning, Paul, a passionate storyteller drawing on the wisdom of many generations, grounded students in traditional cultural knowledge. One of the stories she tells is that of the creation of her own people, the Nez Perce.

In the story, Coyote kills a monster that’s been killing animals. Coyote and Fox cut the body into pieces, scatter the pieces to the four directions, and thus people the world. Soon, the remains of the monster are all gone. But the beautiful Kamiah Valley where the monster had made so much trouble is empty, with no one to enjoy it. Coyote says to Fox, “Bring me some water with which to wash my hands.” Coyote sprinkles the remaining drops of monster blood from his hands and creates the Nez Perce people. Coyote says to the newly emerged people: “You may be small, but you’re strong, brave, and intelligent.”

Paul says, “I share that story because when I was growing up, I had a teacher tell me I was just a dumb Indian. My father helped me learn that story so I would know that I was not dumb but rather was intelligent. I got a lot of letters from camp participants telling me, ‘I now believe I am not a dumb Indian’ and ‘I didn’t think I could do it,’” students who are now health care professionals and productive researchers.

Paul says Na-ha-shnee started because a group of inspired people “knew that we needed to provide the opportunity to undo those stereotypes. They needed to know they could do it, and that they were loved.”

More than 500 students have participated in Na-ha-shnee in its 25-year history.

The Audacity to Dream

Lonnie Nelson, an assistant professor in the College of Nursing and a descendant of the Eastern Band of Cherokee Indians, affirms the power of experiential learning.

“My mom was an Indian Health Services nurse,” he says. When he was in the tenth grade, they were living on the Navajo Nation. “My chemistry teacher had heard about a program at Northern Arizona University.” Nelson was one of two students accepted from his high school.

“So off to Flagstaff we went for six weeks on a college campus.” Nelson says his “goal had been to join the military,” in honor of the warrior tradition of his people, “but that program changed me. One thing was just the exposure to college life. And here were these researchers at this university who were taking an interest in me, and listening to my ideas, and trying to incorporate them into the research in a real chemistry lab. And that was a first for me! Now I’m a university faculty member and in the position to create a pipeline like that.”

But then the coronavirus pandemic threw everyone’s plans in the air. Bender, Nelson, and their colleagues quickly regrouped.

This year, 33 students from all over the country will participate in an online program that combines aspects of both Na-ha-shnee and the program Nelson had envisioned.

“A lot of schools have been forced to adapt, and from our perspective, something was better than nothing, so we decided to do something,” Nelson says.

“We’re sending the participants Chromebooks,” to ensure they can get online, “and every week they’ll get a package from us. It’ll contain the kits for the experiments for the week as well as any other supplies they might need for other activities. We’re sending them a microscope and slides, so they prepare and stain samples. They’ll get petri dishes, and agar” so they can grow microbial cultures.

“We are planning to hold talking circles at the end of every day, with an adult facilitator, to reflect on whatever is going on.” The talking circle is a ceremony with a central place in Native cultures. Participants speak one at a time, as others listen in respectful silence. There is no judgment or criticism. The talking circle, Nelson says, gives students “space to share” whatever is on their minds: science, careers, or the stress of living through the uncertainty of a pandemic.

Wil James, a Swinomish physician and Native speaker, will be there to help facilitate talking circles. The circle is important because “all of us are smarter than any one of us. That’s the power of oral tradition: it provides space for everyone. Critical thought, open mindedness, talking from the heart, all have the ability to bring people together despite their differences.”

Suspending judgment through mutual respect “allows for the sharing of information which breeds creativity. When we become polarized, we become unenlightened to what could be,” James says.

James was educated at Stanford and received his medical training at the University of Washington. “What I bring is that—a melding of the two. My goal is to expose people to the way I was taught. I am bringing teaching from an oral tradition.”

James adds that while “some people would talk about cultural appropriation, the simple power of the talking circle can be used by everybody.”

In his new role as an assistant director of student mentoring and success, James likes to say that “the paint moves.”

“At a pow wow, the paint people wear has meaning. It’s like a mantle, or a role, a responsibility. If you go again ten years later, you’ll see the same paint, the same roles, but on different people.” Just as James once wore the paint of a student, now he wears the paint of a teacher. “I’m trying to move the paint to the next generation of people,” he says.

“Society deserves to teach the next generation” of healers, storytellers, scientists, engineers, “and we need to strive to find ways to reach people so they can be taught the things they need to be taught. And our responsibility as teachers is to find those ways.

“We need the audacity to dream, to see our own self-worth,” James exclaims. “Dream big—and start with yourself!” 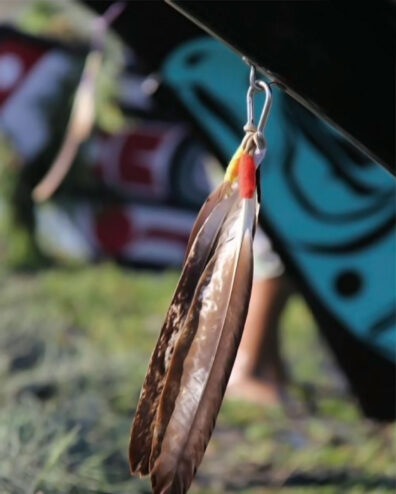