Numerous courageous people on the front line of the COVID-19 pandemic—nurses, doctors, first responders, and essential workers—sacrificed and helped us all. Many WSU alumni, faculty, and staff sought ways to support them, and to reach out to those in need.

It started at the end of March with code words and reminders to practice social distancing and leave tips for hospitality workers.

WSU head football coach NICK ROLOVICH has been treating essential workers and the people of Pullman to free meals. Meals for members of the public are first come, first served, and announced via Rolovich’s Twitter account, which has some 35,000 followers. 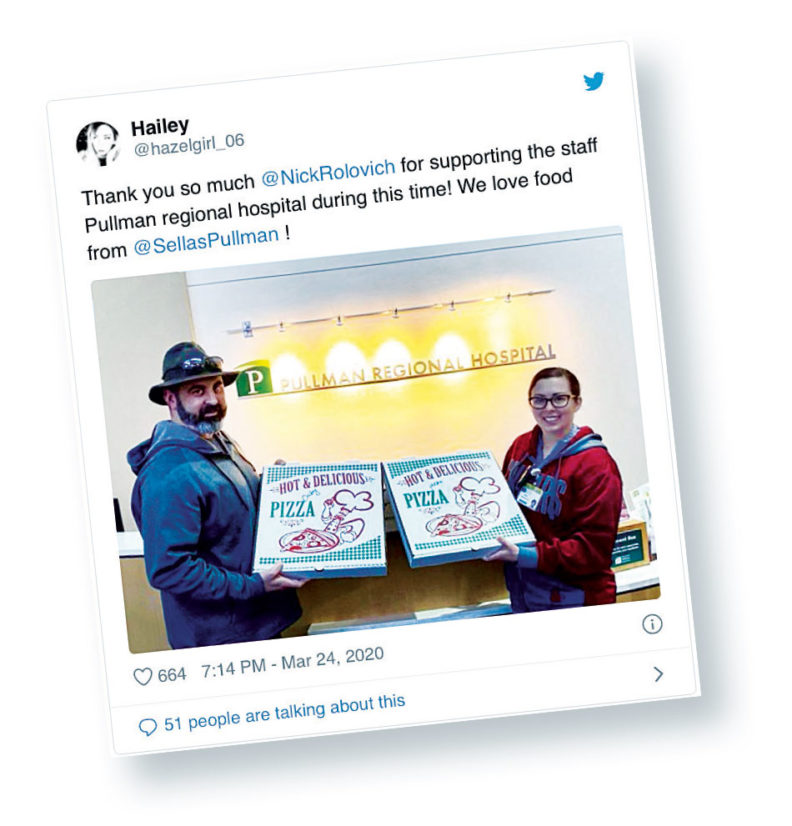 Rolovich prepays for the food, then posts the location, password, and number of dishes available to go. It’s a way of showing the coach’s commitment to, support of, and appreciation for the community and local businesses during the COVID-19 crisis.

“I’m big on that idea of pay it forward. I think it does affect people’s lives,” Rolovich says. “I like being part of that. I think it falls within the scope of whatever those pillars are of Cougar spirit. And I like being spontaneous.”

“Helping each other during a difficult time is what Pullman is all about,” Pullman firefighters tweeted on their account — using the hashtag #PullmanProud — after Rolovich bought them breakfast from Old European. He bought Pullman police breakfast there, too. And he bought Italian food from Sella’s Calzone & Pizza for staff members at Pullman Regional Hospital.

Rolovich has also shared tacos from Pullman’s Taqueria Las Torres taco truck and barbecue from Zoe Coffee & Kitchen. He plans to keep offering meals to the people of Pullman throughout the pandemic—maybe longer—publicizing info about once a week on how to participate in the offers.

“I don’t necessarily have a plan,” Rolovich says. “I’d probably do this even when we’re not in the pandemic. Then it’s more of a fun deal. This is hopefully helping people and families who could use a meal. In the current situation, though, we don’t want to encourage the gathering of people. That was the only thing that worried me.”

He also didn’t want it to become a publicity stunt—”although it kind of is just because it brings light to those restaurants,” Rolovich says. “I’m just grateful for the way myself, my staff, and my family have been accepted into the Pullman community, and we wanted to be a positive part of that. I’m very blessed to be in the position I am financially. I’m one of the ones who can help. I help because I can.”

And so can others. “Even if it’s not a monetary contribution, I think even just uplifting the spirits of another person is included in this,” says Rolovich, former head football coach at the University of Hawaii. “I do hope that multiplies because of this. The spirit of aloha is what it’s called in Hawaii. I try to spread it around.”