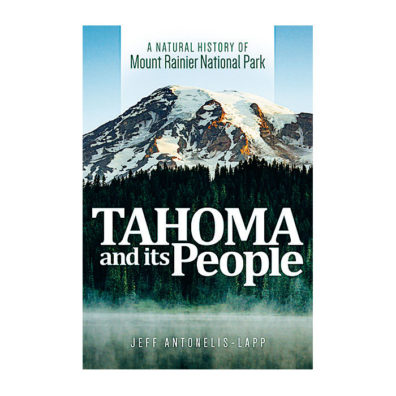 When people say, on a sunny and clear Seattle day, “The mountain is out,” there’s no question what mountain they’re talking about. The mountain is Rainier. At 14,410 feet above sea level, it looms large, not only on the horizon but in Washingtonians’ collective sense of place and importance.

Washington’s tallest mountain—majestic, snow-capped, commanding—is a dramatic and proud symbol of the state. An active volcano, it’s also the most glaciated peak in the contiguous United States that attracts climbers, campers, day-hikers, skiers, snowshoers, scientists, and tourists to its slopes, meadows, lookouts, and trails.

Jeff Antonelis-Lapp, now retired, taught environmental education and natural history at The Evergreen State College from 1998 to 2015, and that’s where this book was born. While planning a course on Mount Rainier, he couldn’t find the text he wanted to read with his students: an up-to-date natural history. The first-time author worked on this volume for ten years.

In the opening vignette, he lays out both the beauty and danger of the place. While hiking solo on a sunny summer day, he spots helicopters, a reminder that rangers were working to remove a body after a climbing accident, as he’s admiring the wildflowers.

Seasonal work in the late ’70s led Antonelis-Lapp to fall in love with Rainier, established in 1899 and one of the nation’s oldest national parks. He’s hiked all of the mapped trails of its 236,381-acres and completed the famed Wonderland Trail six times. The book concludes with an anecdote from a solo hike of the 93-mile loop and a look toward future conservation efforts.

In between, Antonelis-Lapp introduces the lay of the land, working clockwise around the mountain from the Nisqually River to Longmire, followed by the Puyallup and Carbon Rivers, and—finally—the Sunrise area. Two more chapters offer primers on the Native peoples who hunted and gathered here as well as the mountain’s geologic history.

Order Tahoma and Its People from WSU Press