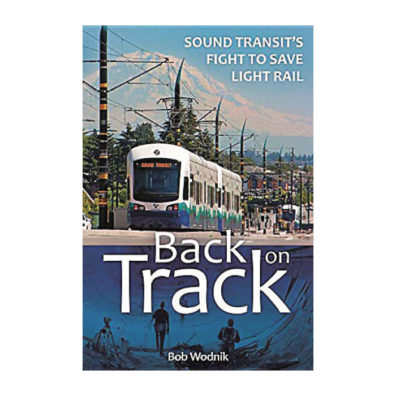 In the early years, it was like working at a startup.

“We had no policy guidelines, no HR (human resources department) to turn to. We were like throwing tracks out in front of a runaway locomotive,” says Paul Matsuoka, deputy executive director of Sound Transit, in Bob Wodnik’s latest offering from WSU Press.

Back on Track describes the beginnings of Sound Transit’s battle for light rail in Seattle and the central Puget Sound region. The young agency, laden with controversy, public ridicule, and unfavorable headlines, came close to collapse, as Wodnik explains.

Wodnik was an agency insider with a background in journalism. He served as Sound Transit’s senior communications specialist from 1999 to 2017 after working as a reporter and columnist at the Everett Herald, among other regional newspapers. Here, he goes behind the bureaucracy of one of Sound Transit’s most crucial and dramatic years.

In 2001, the organization faced backlash from prominent politicians and community leaders as well as the press. One editorial in The Seattle Times encouraged people to “Face Reality; Pull the Plug on Light Rail.” Naysayers included former Governor Booth Gardner, former state Senator Dino Rossi, and former King County Councilmember Rob McKenna, who had held a seat on Sound Transit’s board of directors.

Wodnik examines the events that led to the agency’s survival and the major players in the room when key decisions were made. Those people have since had time to reflect on how Sound Transit remained solvent. Joni Earl (’75 Bus.) emerges as the heroine.

She discovered—at the tail end of 2000, just months after becoming Sound Transit’s chief operating officer—that the agency’s cost estimates were several years and close to a billion dollars off base. Several months later, she took the Seattle Post-Intelligencer to task for a story alleging costs had been concealed and helped Sound Transit secure an above-the-fold front-page correction. She also helped secure millions in federal funding for the project.

Wodnik lauds her for rebuilding Sound Transit’s credibility and getting the organization back on track. He doesn’t delve deeply into the lawsuits that plagued the agency during this tumultuous period but does list them briefly.

Order Back on Track from WSU Press