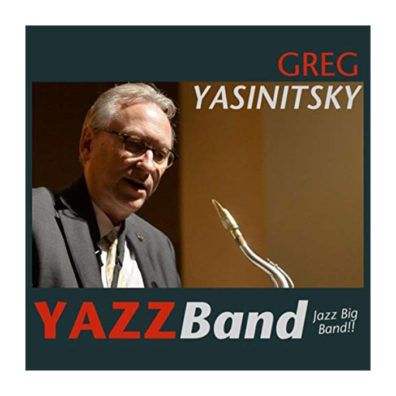 Greg Yasinitsky wears many hats. He is a scholar of jazz, a published writer, a prolific and award-winning composer and arranger, an avid performer in the jazz and classical idioms, and Regents Professor of music at Washington State University. With a background as diverse as his, one would expect great things when he channels all of his skill and energy into one recording project. Yasinitsky’s 2018 release YAZZ Band does not disappoint. Featuring nine original compositions arranged for big band, the album takes the listener on a diverse and evocative musical journey.

The action-packed opening track “Serpentine” lives up to its name and is equal parts John Coltrane, Wayne Shorter, and…snakes. The melody of this energetic piece grips the listener’s attention as it chromatically slithers to and fro. Other stand-out performances include the ballad “Missing You,” “True North” with its playful unison theme woven throughout, and the cool and confident “New York Confidential” which tips its hat to the writing styles of Billy Strayhorn and Thad Jones. Other highlights from the album include beautiful and burnin’ solos from Brian Ward on piano and Vern Sielert on trumpet.

Yasinitsky is a generous and thoughtful arranger, giving each section of the band their time to shine, like the trombone section on “Gator Tail,” or the folks on the lower sounding instruments on “Full Blown Blues.” Being a saxophonist, he really knows how to craft a sax soli, as can be heard on “Partial Eclipse” and “One-Two-Three.” His quirky, humorous, and engaging arranging style means you’ll be listening to YAZZ Band over and over again, and hearing something new each time.

On a side note, I usually shy away from modern big band recordings created using a handful of players and overdubbing section parts as I often find them to sound sterile or lacking tonal diversity within the horn sections. YAZZ Band, recorded at the WSU recording studio, successfully presents the music and ensemble without sounding bland or sonically drab.

Kevin Woods is the director of jazz studies at Western Washington University.