It’s a cold February morning. Flat gray clouds blanket the sun and snow berms line the streets on the WSU Spokane campus. Outside the University’s Veterinary Specialty Teaching Clinic, several people stand hunched inside their coats, their breath misting in the frigid air.

The Healthy People + Healthy Pets clinic won’t open its doors for a good 20 minutes, but they’re taking no chances.

Many of the people standing in line are homeless. Some, like Lori Broomhall, who came here with two puppies on a cross-town bus, are clinging to newfound stability after a stretch of homelessness.

For all of them, this is a rare opportunity to get medical care that would normally be out of reach—for themselves and their pets.

Within minutes of opening, the clinic’s spacious waiting room is packed with people and animals.

Pets can be a vital anchor for people caught in the slow-motion disaster of homelessness. The human-animal bond provides emotional support and unconditional love in a time when such things are in short supply. 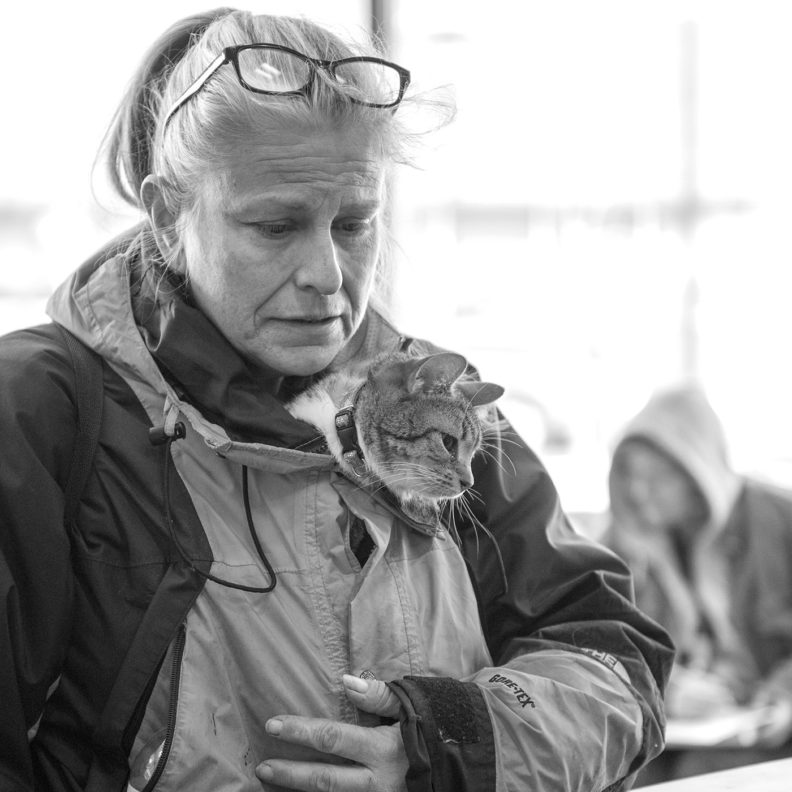 “When I was homeless, my cat was my lifeline,” says Broomhall. “We counted on each other. Taking care of her was difficult, but she took care of me, too. I couldn’t have coped without her.”

Broomhall’s cat, Babesie, died a few months ago at age 14. Her new puppies are her family now.

As the veterinary exam rooms fill up inside the clinic, community nursing professor Gail Oneal tells me why many homeless people refuse to go see a doctor, even when it’s free: Medical offices don’t let pets inside.

And if a doctor visit means leaving a beloved companion alone and vulnerable on the street, they just won’t go. It makes sense. I wouldn’t leave my cat in that situation either.

Oneal (’02, ’04 MS, ’11 PhD Nursing) and College of Nursing dean Joyce Griffin-Sobel saw that dilemma firsthand at homeless outreach clinics. About two years ago, they realized that WSU had a unique opportunity to solve it. So Oneal called Bryan Slinker, dean of the College of Veterinary Medicine, and pitched their idea: human and veterinary medicine together in the same place.

As a longtime proponent of the One Health movement, Slinker (’80 DVM, ’82 PhD Vet. Sci.) immediately saw the potential.

The One Health approach recognizes that human and animal health are linked, so it focuses research in areas where the two connect most closely. For instance, WSU researchers are working in Africa to prevent livestock diseases, eradicate rabies, slow the spread of antibiotic-resistant bacteria, and control the spread of diseases like the Zika virus, which infect humans and animals alike.

But the One Health concept also matters much closer to home, and that’s what intrigued Slinker.

Traditional health-care providers aren’t set up to meet the complex needs of homeless patients. And although those who serve people who are homeless know that many have pets, nobody really knows how many. Are the pets healthy? How do homeless pet owners care for them? Is the companion animal a detriment or a benefit?

The University’s One Health clinics and the associated research are beginning to answer those questions.

“The hypothesis behind all of this,” says Slinker, “is that we will get better human healthcare when we also care for the animals people are bonded to.”

When stated so simply, it seems obvious. But it’s a surprisingly revolutionary idea. WSU is among only three U.S. universities to deliver integrated human and animal healthcare.

Eventually, Slinker says, he envisions establishing best practices and a body of knowledge that will convince lawmakers to allocate public funds to similar clinics statewide and nationwide. Nonprofit organizations would step in too, at some point—and some already have.

The February clinic in Spokane was partially funded by a grant from MultiCare Community Health Foundation, which owns Deaconess and Valley hospitals. The foundation also helped provide sterile supplies and a pet food bank.

If the idea of treating people and their pets together catches on, it could revolutionize the way society brings healthcare to those who live at the margins.

“A whole generation of health-care providers may have a different understanding of the larger field of medicine, having seen people and animals being treated together,” says Slinker.

Cariann Turbeville, who is one of two supervising veterinarians at today’s clinic in Spokane, says that some of her students didn’t see the point of it at first.

“They thought homeless people were being irresponsible by having pets—that these were people who just couldn’t take care of an animal. But when the first group of vet students got here and saw the pets and talked to the owners… After that day, minds changed.”

I hear a similar story from some of the nursing students who are on hand to do health checks and vaccinations for the clinic’s human patients. They weren’t sure at first that treating pets and people at the same time would be worthwhile.

As Broomhall helps her boisterous puppies pretzel themselves back into what used to be Babesie’s cat carrier, she voices what the nursing and veterinary volunteers have come to realize.

Pets who belong to homeless people are not actually homeless. Home is wherever their humans are. And their humans will go to great lengths, even going hungry themselves, to support them.

“My pets come first in everything,” Broomhall says. “I’d do anything for them. It makes me happy to make them happy.”

On an unusual snowy night in Seattle, the truth of this—the strength and necessity of the human-animal bond—becomes clearer than ever. At the One Health clinic at New Horizons Ministries, WSU veterinarians team up with community health providers from Neighborcare Health, as well as staff and students from the University of Washington.

The clinic has all the business it can handle.

Wedging my large frame into the corner of a small, crowded room in the homeless shelter, I take notes as unobtrusively as possible while WSU veterinarian Katie Kuehl helps a veterinary student examine Andie, a gorgeous tortoiseshell cat.

Kuehl is mostly hands-off. The student is in his final clinical rotation, so this is his show.

Andie the cat is constantly talking—loud meows that range from plaintive to downright unhappy. Although the veterinarian is gentle and assured, his feline patient just isn’t on board with this experience.

Nevertheless, the cat remains calm and pliant. Her owner, a shy teenager with pink and blue hair and a well-worn hoodie, replies to every meow with murmurs of understanding. Andie seems to have decided that as long as her human is okay with this, she can deal.

As Andie’s examination ends, a volunteer with a clipboard immediately engages her youthful owner in conversation, taking periodic notes. The cat, meanwhile, twines happily around her human’s ankles.

I realize that what sounds like a casual conversation about pets is actually very carefully crafted to collect data on the nature of medical care and pet ownership among the homeless. But research isn’t the only point. The cat has had her checkup, and the clinic’s staff want her human to see a health-care provider too.

However, Andie’s owner hesitates to commit to a visit. The teenager hovers on the brink, unsure.

When the nurse practitioner’s door opens, Andie the cat makes the decision by walking right in. She reaches the end of her leash and looks back at her human as if to say, “Well, what are we waiting for?” 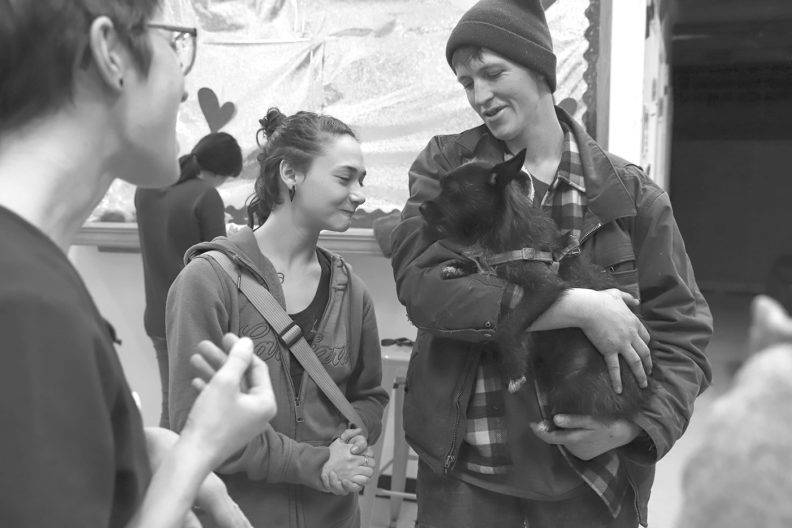