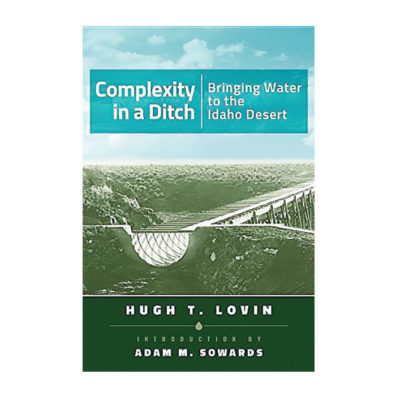 Growing up on a farm near Inkom, Idaho, the young Hugh Lovin would engineer ways to divert water to the crops he produced for his livestock. Later in life, after years of writing histories of labor, Lovin turned his attention again to irrigation. In a number of articles, collected for the first time in this volume, he traced the history of the “dreamers, schemers, and doers” who brought water to hundreds of thousands of acres of southern Idaho desert.

Lots of “Eden-minded” Americans were sold a bill of goods and drawn to the Idaho desert with the promise of a paradise where water ran like sand. As Mark Twain said, “Many a small thing has been made large by the right kind of advertising.” By the early twentieth century, though, most of the schemers were outclassed by the persistence of dreaming doers, who actually managed to raise the funds to engineer irrigation projects that did water the desert.

Until then, though, early Euro-American settlers had to contend with the fact that their land would dry up and blow away on a windy day. And even when water did become available, they had to clear the land of sagebrush and rabbits. Thousands of apple trees, in one example, were “completely barked” by hordes of rabbits, which settlers killed by the thousands.

This volume serves to bring together Lovin’s painstaking archive-diving and well-presented research with an introduction by Idaho historian Adam Sowards. Anyone interested in the complex and nuanced history of water use in the West—which Sowards rightly points out is often presented as monolithic, and modeled on the Colorado River—will be well served by this book.