One by one, they share memories of curfews, 42-cent dinner dates at the CUB, the JFK assassination, and the birth of women’s lib. A few regale listeners with the infamous tale of the 1964 “Pot Push,” which had nothing to do with cannabis.

These are just a sample of the treats recorded at the recent Diamond and Golden Grads digital storytelling workshops, led by Washington State University English instructor and former assistant director of the Digital Technology and Culture program Rebecca Goodrich.

The workshops, held at the Lewis Alumni Centre during the Diamond and Golden reunions, are available to visiting 50- and 60-year graduates who would like to contribute oral histories of their time at WSU. The stories will eventually be archived by Manuscripts, Archives, and Special Collections in the Terrell Library.

Goodrich matches alumni with students who conduct the interviews. She says the project is a win-win-win.

“The grads really enjoyed it and some brought newspaper clippings to share with the students. The old yearbooks were out and it was a great social event.

“It was wonderful for the students too,” she says. “They were so interested in what the alumni were telling them. They asked great questions and later I heard them telling each other about the stories they heard. It was the perfect activity to get generations talking.”

Jonathan Wallis, a senior in neuroscience, took part in last April’s workshop and says he would gladly do it again.

“I heard stories I wouldn’t have known about, like the football stadium bleachers being burned down by an arsonist.”

Wallis says it also made him appreciate the aspect of time and how the alumni had contributed to society in many important ways, which all began at WSU.

“There was a civil engineer who worked many years in the field and had fond memories of a particular professor,” he says. Fifty years later, “he was still grateful to that professor—it was eye opening.” 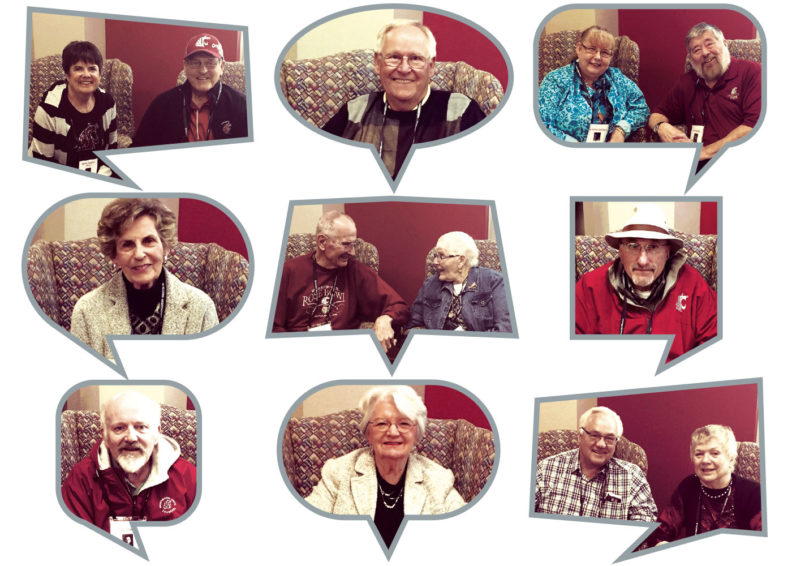