Not everyone will love a beet, but it has long been a vegetable of love.

The deep red of a beet and its earthy sweetness speak to some people, who adore the vegetable in all kinds of dishes. Beets have a lot of healthy qualities, too, and even potential chemical uses in solar panels.

That’s not to say beets don’t have detractors. That same earthiness, produced by the substance geosmin, puts off some palates.

The beet—Beta vulgaris, also known as garden beet, blood turnip, beetroot, or red beet—was cultivated in ancient Greece and Rome, but there are stories of beets in the Hanging Gardens of Babylon as well.

It’s related to Swiss chard and, in fact, people mostly ate the leaves and stalks of beets at first, with the thin bulb used for herbal medicine. It wasn’t until the 1500s that varieties with a thicker bulb entered the diet of most Europeans. As a good winter vegetable, the beet became a staple through eastern Europe.

We now connect the blood-red color with beets, but that shade was selectively bred into the vegetable in the eighteenth century. We don’t often see white beets at the store or farmers market, but they are the most common variety grown for sugar production.

The ancient Greeks and Romans prized beets for their supposed aphrodisiac qualities. Long associated with lust and love, beets appear on frescoes in houses of prostitution of Pompeii and Rome. Even in Greek mythology, Aphrodite ate beets to increase her appeal.

While claims of amorous abilities are questionable, there’s no doubt that beets carry plenty of health benefits. For example, betalains, the antioxidant-laced pigments that give beets their redness, are being studied as a way to fight cancer.

A number of studies support the use of beet juice to lower high blood pressure, due to its high nitrate content. Nitrate gets transformed by an enyzme to nitric oxide, which relaxes blood vessels. Beet juice can lead to drops in both systolic and diastolic pressure at rates higher than some medicine.

The betalains could provide more than just a health benefit for us; they might improve our solar electrical panels.

The strong betalain-red coloring in most beets is also used as a dye in foods and other substances. In the nineteenth century, women used that juice as a cheek and lip stain.

Beets grow well almost anywhere in the state, but they grow best in cool conditions and bright sun, according to WSU Extension. Make successive plantings every three to four weeks from spring to midsummer, and then in the fall about 10 weeks before heavy frost, if you plan for winter storage.

They’re biennial and normally grow an enlarged root in the first season.

Beets, like many root vegetables, transform sublimely when roasted. The natural sweet flavor emerges and it becomes a little less earthy, which can please palates that don’t want that strong loaminess. If you boil them, leave four or five inches of stem on the beets so you don’t have the red color “leaking.”

In soups or stews, beets have long played a leading role. It’s said there are as many types of borscht in Eastern Europe as there are villages. Beets pair nicely with sour cream or strong cheese in soups and other dishes.

Another way to appreciate the hardy flavor is a beet salad, combined with pungent greens, nuts, mustard, vinegar, and cheese. And don’t forget the beet tops; they’re an excellent source of vitamin A and can be cooked or served fresh as greens.

Beets preserve well through pickling. Pickled beets are a Midwestern classic, but they can also be made with cinnamon and sugar to give them an intense flavor. Just be sure to follow WSU Extension recommendations for pickling to avoid contamination—unspoiled vegetables to start, the right amount of vinegar, and proper preparation—and you can enjoy the red root all year.

Lentils with Roasted Beets and Carrots

About 1 dozen (1 large bunch) medium-small carrots, with their tops on

½ cup chopped fresh herbs (whatever you have on hand: basil, chives, or parsley)

Grated zest of one organic lemon

2. In a 375º F oven, roast the vegetables for about 30 to 45 minutes, until tender when pierced with a fork. If you wish, once the beets are cool enough to handle, you can remove the skins from the beets by gently rubbing them off with your fingers.

3. Meanwhile, rinse the lentils and check them for small pebbles, then place them in a medium saucepan. Cover them with water and bring to a boil.

4. Simmer on medium heat, uncovered, for about 30 to 40 minutes, until tender but not falling apart or turning mushy. (Add water if necessary through the cooking). Drain the lentils and place them in a large shallow serving bowl.

5. In a blender or food processor, puree the garlic, lemon juice, and salt to make the aioli. Add the olive oil and puree until thick and opaque and no chunks of garlic remain. Pour this mixture over the lentils. Add the chopped carrot tops, chopped herbs, and grated lemon zest and toss it all together. Season with a bit of salt and pepper if you wish.

6. Place the roasted carrots and beets on top, then crumble the feta all around. Serve warm or cold. 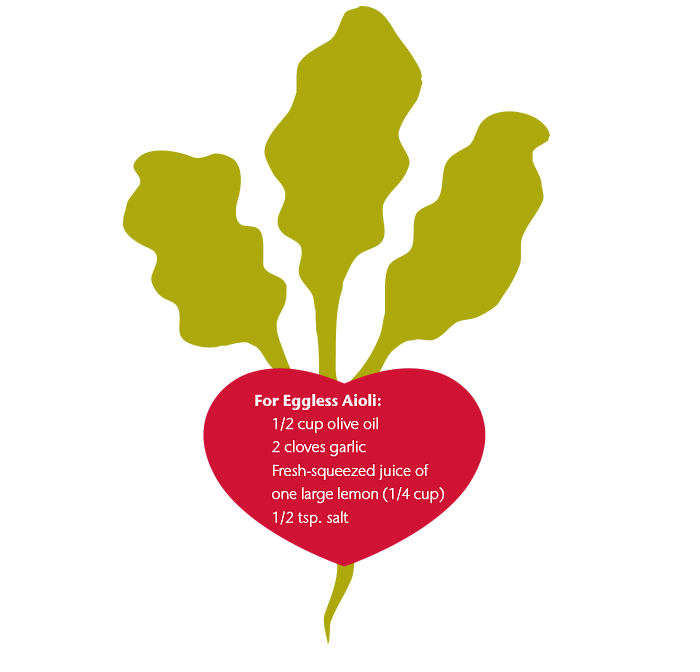